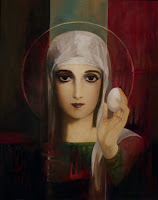 Today is the Feast Day of Mary of Magdala (also known as Mary Magdalene).

I can think of no better way to celebrate this day on The Wild Reed than by sharing excerpts from a very scholarly tract (from FutureChurch.org) about this remarkable woman of the New Testament. Enjoy!

Mary Magdala – Apostle to the Apostles

Mary of Magdala is perhaps the most maligned and misunderstood figure in early Christianity. In Christian art and hagiography, Mary has been romanticized, allegorized, and mythologized beyond recognition. Since the fourth century, she has been portrayed as a prostitute and public sinner who, after encountering Jesus, repented and spent the rest of her life in private prayer and penitence. Paintings, some little more than pious pornography, reinforce the mistaken belief that sexuality, especially female sexuality, is shameful, sinful, and worthy of repentance. Yet the actual biblical account of Mary of Magdala paints a far different portrait than that of the bare-breasted reformed harlot of Renaissance art.


First Witness to the Resurrection

Nowhere in scripture is Mary of Magdala identified as a public sinner or a prostitute. Instead, scripture shows her as the primary witness to the most central events of Christian faith, named in exactly the same way (Maria e Magdalena) in each of four gospels written for diverse communities throughout the Mediterranean world. It was impossible to relate the story of the Resurrection without including “Mary, the one from Magdala.”

Luke 8,1-3 tells us that Mary traveled with Jesus in the Galilean discipleship and, with Joanna and Susanna, supported his mission from her own financial resources. In the synoptic gospels, Mary leads the group of women who witness Jesus’ death, burial, the empty tomb, and His Resurrection. The synoptics contrast Jesus’ abandonment by the male disciples with the faithful strength of the women disciples who, led by Mary, accompany him to his death. John’s gospel names Mary of Magdala as the first to discover the empty tomb and shows the Risen Christ sending her to announce the Good News of his resurrection to the other disciples. This prompted early church Fathers to name her “the Apostle to the Apostles.”

That the message of the resurrection was first entrusted to women is regarded by scripture scholars as strong proof for the historicity of the resurrection accounts. Had accounts of Jesus’ resurrection been fabricated, women would never have been chosen as witnesses, since Jewish law did not acknowledge the testimony of women.

Early non-canonical Christian writings show faith communities growing up around Mary’s ministry, where she is portrayed as understanding Jesus’ message better than did Peter and the male disciples. Scholars tell us that these writings are not about the historical persons Mary and Peter but instead reflect tensions over women’s roles in the early church. Prominent leaders such as Mary and Peter were evoked to justify opposing points of view. What is not disputed is the recognition of Mary of Magdala as an important woman leader in earliest Christianity.

Why are contemporary Christians uninformed about Mary’s faithful discipleship and prominent leadership role in the infant church? One explanation is a common misreading of Luke’s gospel which tells us that “seven demons had gone out of her.” (Luke 8,1-3) To first century ears, this meant only that Mary had been cured of serious illness, not that she was sinful. According to biblical scholars such as Sr. Mary Thompson, illness was commonly attributed to the work of evil spirits, although not necessarily associated with sinfulness. The number seven symbolized that her illness was either chronic or very severe. 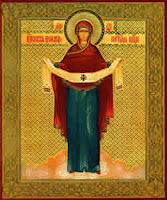 In 312, when Constantine made Christianity the religion of the empire, the Christian community was caught in a cultural conflict as it moved from worship in house churches where women’s leadership was accepted, to worship in public places where women’s leadership violated Roman social codes of honor and shame. In the fourth century, male church leaders at the Council of Laodicea suppressed women leaders because of the belief that women were created subordinate to men. During this same time period, we see the memory of Mary of Magdala changing from that of a strong female disciple and proclaimer of the Resurrection to a repentant prostitute and public sinner. Scholars such as Dr. Jane Schaberg believe this was done deliberately to discourage female leadership in the church.

As knowledge of Jesus’ many women disciples faded from historical memory, their stories merged and blurred. The tender anointing of Mary of Bethany prior to Jesus’ passion was linked to the woman “known to be a sinner” whose tears washed and anointed Jesus’ feet at Simon’s house. The anointing texts combined all of these women into one generic public sinner, “Magdalen.” Misidentification of Mary as reformed public sinner achieved official standing with a powerful homily by Pope Gregory the Great (540-604).

Henceforth, Mary of Magdala became known in the west, not as the strong woman leader who accompanied Jesus through a tortuous death, first witnessed his Resurrection, and proclaimed the Risen Savior to the early church, but as a wanton woman in need of repentance and a life of hidden (and hopefully silent) penitence. Interestingly, the eastern church never identified her as a prostitute, but honored her throughout history as “the Apostle to the Apostles.” 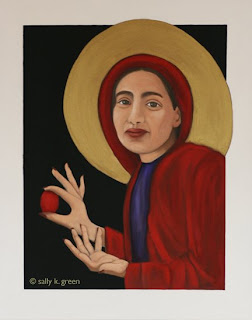 Saint Mary Magdalene was a dear friend of Jesus. She was also a wealthy woman of stature in her community. She was there when Jesus was crucified, while other disciples fled.

Ancient tradition of the Eastern Church says that after Christ’s Ascension, Mary traveled to Rome. Due to her high social standing she was admitted to appear before Caesar to tell him of how poorly Pilate had administered Jesus’ trial.

To make her point, she picked up an egg from the banquet table, explaining that Jesus came out of the tomb like a chicken breaking out of its shell. Caesar scoffed and said, “a human could no more rise from the dead than that egg could turn red. ” As he said the words, the egg turned red!

It is believed that this red egg inspired the tradition of coloring Easter eggs. 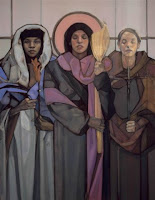 Hi, Can you tell me where you found the portrait of the Magdalene holding the egg at the top of this post? Thank you, Morgan

I think if you do a Google image search for either "Mary Magdalene" or "Mary of Magdala," this particular image will come up. I'm sure that that's how I found it, although, if I remember correctly, no artist was cited. Let me know how your search goes!