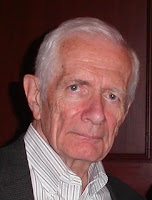 Regular readers of The Wild Reed would know that earlier this year I worked with a number of other local Catholics to bring author and journalist, Robert McClory (pictured at right) to the Twin Cities for the May 3 Second Annual Prayer Breakfast for Hope and Justice.

As keynote speaker at this event, McClory spoke on the place and role of faithful dissent in the Roman Catholic Church, and shared insights gained from the research and writing of his latest book, As It Was In the Beginning: The Coming Democratization of the Catholic Church.

Recently, the Catholic Press Association awarded McClory’s As It Was In the Beginning First Place in its History category. Congratulations, Bob!

As the title [of McClory’s book] indicates, democratic, lay participation is a deeply valued and practiced tradition of the early church, and such a tradition is a true basis for reform in tomorrow’s church. McClory persuasively argues that the time to begin the future church is now.

Early Christian texts are filled with a sense of community meetings, community sharing, community participation in decisions, and above all they reflect a strong belief that the consensus of the Christian people indicates the guidance of the Holy Spirit in the church . . . Whatever power prelates possessed in the early church, they possessed it on behalf of their communities and as representing their communities.

The first six chapters of McClory’s book promote this argument and support it with historical evidence from the early church up to the mid-20th century. The next six chapters focus on the present and the role that the principles of democracy have for the church today.

For as Tierney reminds us:

The modern practices of representation and consent that characterize secular constitutional government are not alien to the tradition of the church. And if in the future the church should choose to adopt such practices to meet its own needs in a changing world, that would not be a revolutionary departure but a recovery of a lost part of the church’s own early tradition.

McClory’s award-winning book encourages and validates such recovery efforts. Summing up his conviction that the present moment augers well for the future, McClory writes:

The ongoing nature of [the current] crisis [in the Catholic Church] is so severe and so debilitating that it will eventually compel major structural changes in the church’s operational system.

The final chapter of As It Was In the Beginning explores what such structural changes might look like.

If you haven’t already read Robert McClory’s As It Was In the Beginning: The Coming Democratization of the Catholic Church, then I wholeheartedly urge you to do so. As author David Gibson says: “This book is a model for the kind of debate the church needs, but too often avoids.”

NOTE: To read two reviews of As It Was In the Beginning: The Coming Democratization of the Catholic Church, see the previous Wild Reed post, Robert McClory’s Prophetic Work.

For my April 2008 interview with Robert McClory, click here.

A Selection of Other First Place Winners in the
2008 Catholic Press Association Awards
Theology: The Quest for the Living God by Elizabeth Johnson.
Spirituality (Hard Cover): Welcome to the Wisdom of the World by Joan Chittister.
Spirituality (Soft Cover): Teilhard de Chardin, The Divine Milieu Explained: A Spirituality for the 21st Century by Louis M. Savary.
Popular Presentation of the Catholic Faith: A Jesuit Off Broadway by James Martin, SJ.
Scripture: Introduction to the Synoptic Gospels by Pheme Perkins.
Liturgy: A Commentary on the General Instruction of the Roman Missal by Ed Foley.
Reference Book: An Introductory Dictionary of Theology and Religious Studies by Orlando O. Espin and James B. Nickoloff.
Gender Issues: Green Sisters: A Spiritual Ecology by Sarah McFarland Taylor.
Family Life: Jesus in the House: Gospel Reflections on Christ's Presence in the Home by Allan F. Wright.
Children’s Book: He Said Yes: The Story of Fr. Mychal Judge by Kelley Ann Lynch.