Celebrating the Presence of God Within All Families 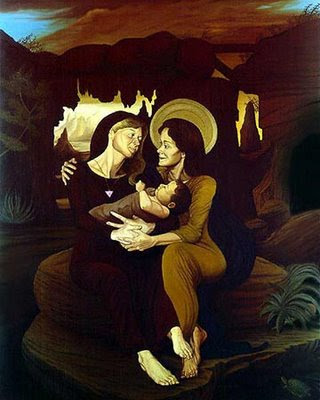 I’ve been told that back in Minnesota, Archbishop Nienstedt recently instructed the priests of the Archdiocese of St. Paul/Minneapolis to read a statement on the Feast of the Holy Family (December 28) that he had written about the “true” nature and meaning of family.

Being currently in Australia, I didn’t have the opportunity to hear the archbishop’s exact take on what, I’m assuming, he understands to be the “objective reality” of the family and family life. I have, however, had the good fortune to read the homily that my friend Rev. Marty Shanahan of Spirit of Hope Catholic Community shared on the Feast of the Holy Family.

Marty’s homily is reprinted in its entirety below.

We celebrate today the “Feast of the Holy Family”

What is your image of the “Holy Family”?

Is it a somewhat an “Ozzie & Harriet” 1950’s paradigm put onto the Gospel?

Is it a “perfect” family, if there really ever was or is such a thing?

One of the greatest heresies of the Church’s history is the heresy of thinking and believing that God became one with us in Jesus only somewhat, or only at the surface level.

But what we read in the Gospel today doesn’t say that at all.

The last line said: “The child grew and became strong, filled with wisdom, and the favor of God was upon him.”

If you remember from Christmas Eve, God’s favor, doesn’t mean being protected from the pain, ecstasy, joys, and sorrows of human life. It actually means quite the opposite. To find favor, or be in God’s favor means to be so fully immersed in human life that within that experience we see God.

To think that Jesus never hit his finger with a hammer and wanted to verbally express his angst, would be to strip him of the incarnation.

To think that Jesus never had a meal he didn’t like or that he wasn’t told to pick up his room or make his bed, would be to strip him of his humanity.

To think that Jesus didn’t really think that his parents were old fashioned, or that they didn’t understand him, would be to deny the reality of the incarnation.

To think that Mary and Joseph never had to discipline Jesus, to think that he never got grounded or corrected in his behavior would be to deny the humanity which he came to redeem.

Today no doubt many will be confronted with the contemporary argument of and for marriage and family from pulpits across our nation.

Many a preacher will no doubt use this feast and these readings to preach the paradigm of one man, one woman, and children to be the image of the “perfect family.”

I am of the opinion that to use the Scriptures in such a fashion is to do a grave injustice to both Sacred Scripture and the contemporary family.

I will admit one thing, and that is that I am at a loss as to how changing the paradigm, or the words with which that paradigm is expressed, would in any way possible undermine it’s meaning, value, or purpose.

I know families and parents of nearly every sexual orientation known, and every one of those families brings their own gifts, talents and contributions.

I am most certain that Joseph and Mary and Jesus also brought their own gifts, talents and contributions to the family unit as well.

The overriding message it seems to me of this Gospel is that holiness is something we all grow into. Holiness isn’t a magical state of being, it is a learned, prayed and practiced life that all of us are called to participate in.

Family may be single, divorced, separated or widowed.

Family may be safe or it may be unsafe.

But our search as Christians is a search for the God who dwells with us! Our search is like that of the shepherd’s the search for Emmanuel. It is not a search to proclaim where God is not!

Maybe this week we can spend our time, energies, and efforts, modeling Simeon and Anna, pointing out, with grateful hearts, where God is present in our lives, the lives of others, and in our world?

I wonder if in doing that we might all grow in wisdom, and find favor with God?