The Glimpse of His Face at Morning 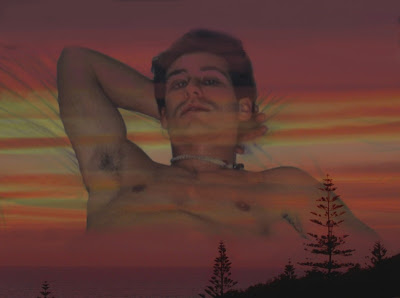 I previously shared this image in a January 2007 post and noted that it's entitled “The Glimpse of His Face at Morning.”

It's actually composed of two images. The first is a photograph of my friend Greg that was taken twelve years ago in Minneapolis. The second photo of the sky was taken from Swallows' Ledge in Port Macquarie in December 2006.

The image's title paraphrases a line from “My Lagan Love” by Kate Bush. The lyrics of her version of this traditional folk song were written by her brother, John Carder Bush in the mid-1980s.

As sang by Kate Bush, “My Lagan Love” is a very haunting song – one which conveys a forlorn sense of loss. “Lagan” is an Old French, possibly Old Norse word meaning anything sunk in the sea (usually goods or wreckage), but attached to a buoy so that it may one day be recovered.

Of course, in matters of the human heart, such “recovery” is not always easy or even possible. Perhaps Kate sings of a drowned lover, or of a love grown cold and which cannot be rekindled. Whatever the case may be, there is undoubtedly a haunting quality to Kate Bush’s lyrics – a quality I’ve attempted to similarly convey in this particular image.

When rainy nights are soft with tears,
and autumn leaves are falling,
I hear his voice on tumbling waves
and no one there to hold me.

At evening's fall he watched me walk.
His heart was mine.
But my love was young and felt,
the world was not cruel, but kind.

Where Lagan's light fell on the hour,
I saw him far below me.
Just as the morning calmed the storm,
with no one there to hold him.

My loves have come, my loves have gone,
and nothing's left to warn me.
Save for a voice on the traveling wind,
and a glimpse of a face at morning.