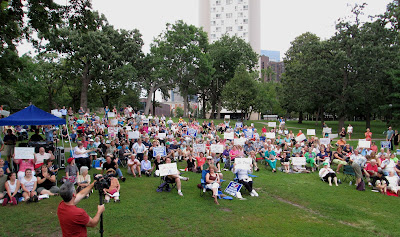 "A thoughtful, entertaining, and inspiring program" . . . That's how one participant described Catholics for Marriage Equality MN's August 15 event "I Do! Believe in the Freedom to Marry."

Held in Minneapolis' Loring Park, the evening event drew over 300 Catholics and friends, providing an opportunity for them to pray together, sing together, and through fun, improvisational comedy, learn how to listen to and talk with family and friends about the proposed Minnesota 'marriage amendment.'

The event also served as the premiere of C4ME-MN's music video "For All the Children." 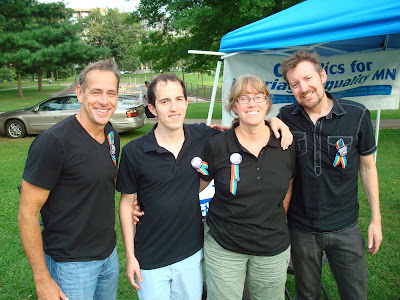 Above: Standing at right with fellow C4ME-MN board members Jim Smith and Lisa Vanderlinden, and Lisa's son Jason.

As executive coordinator of C4ME-MN I had a few minutes in the program to speak. Here's what I said . . .

In preparing my brief remarks for this evening I realized that the best way to describe who C4ME-MN is is to offer a description of all of us gathered here this evening. After all, C4ME-MN couldn’t do what it does as an educational and advocacy organization if it wasn’t for your presence, input and support.

I see C4ME-MN – the organization – as being like the visible crest of a wave. But, together, each and everyone of you comprise the ocean beneath us, giving us the momentum and power to change hearts and minds. Thank you!

So how to describe us? Well, collectively, we here tonight are first and foremost FAITHFUL Catholics. We’re faithful to Jesus’ message of compassion, justice and inclusion, and we’re faithful to our church’s traditions of social justice and primacy of conscience.

We are also INFORMED Catholics. We know we can in good conscience disagree with our bishops. We know that our experiences and insights have a valid role to play in the ongoing development of church teaching. We know too the power of our stories and are committed to working with Minnesotans United for All Families in facilitating honest and effective conversations that will change hearts and minds.

Finally, we’re UNITED Catholics. We are united in our efforts to defeat injustice in all its forms. We’re therefore united in our belief that the MN marriage amendment is unfair, hurtful and not worthy of us as Catholics or as Minnesotans.

We’re going to see all of these aspects of how I’ve just described ourselves embodied tonight in ways that are both inspiring and entertaining. And as executive coordinator of C4ME-MN it would be remiss of me not to join with Jim and the entire C4ME-MN board in thanking the many people who have freely given so much to make this evening possible. . . . 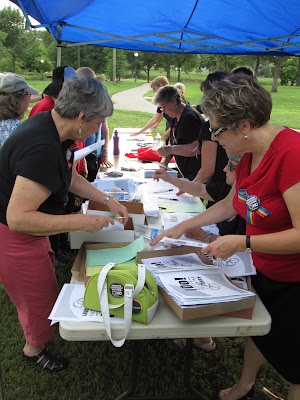 Above: C4ME-MN volunteers assemble the August 15 event program for distribution to attendees. 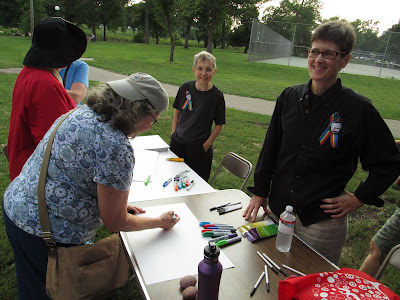 Above: As attendees arrived they were invited to make and decorate placards displaying the name of their parish. Over 20 parishes were represented at C4ME-MN's August 15 event. 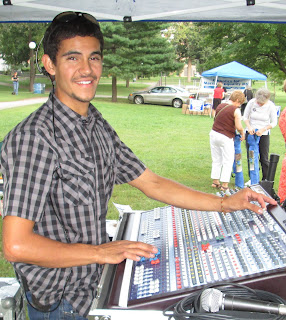 Above: One of the crew of the audio visual company Big Event Productions which, along with Stagetime Productions, Fire Up Video, Table Salt Productions, and Creative Direction, volunteered their time and services to C4ME-MN's August 15 event.

Thanks also to DignityUSA for their generous support. 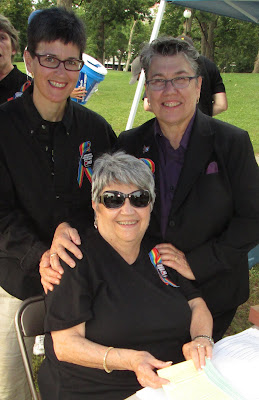 Kathleen, along with fellow C4ME-MN board member Lisa Vanderlinden, led the following opening prayer for the evening.


Gracious God, known to us in many ways, you are with us as we gather as one community and ask your blessing.

All: Bless our unity in diversity, that it be a humble reflection of the beauty of creation.

Bless our celebration, that it be an expression of our joy for the gift of life and love!

All: Bless our laughter, that it herald new hope in our work to build a society of mutual love and justice.

Bless those with whom we disagree, may our happiness be contagious.

All: Bless our differences as a source of our strength and a sign of our respect for one another.

Bless those for whom it takes courage to be here, that they may feel the abundance of life.

All: Bless our call for equality and freedom, that we may both hear and speak your vision of justice and peace. Amen. Alleluia! 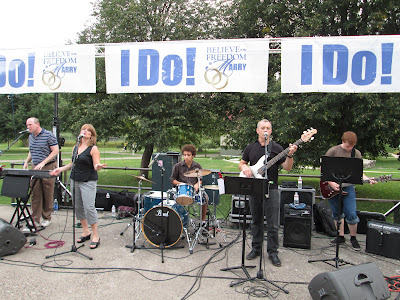 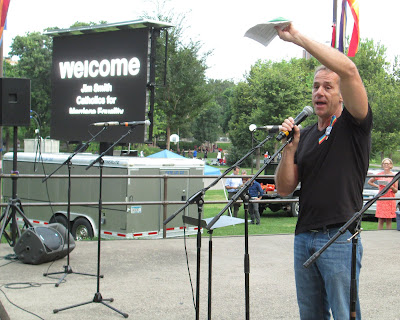 Above: Jim Smith, C4ME-MN board member and driving force behind the "For All the Children" music video, welcomes attendees to the August 15 event.

Later in the program Jim led attendees in the following Profession of Belief.


Do you believe that your baptism calls you forth into the world to sow seeds of love? I do believe!

Do you believe that all God's children have a place in the choir, a place at the table, a place in our world to love who they are called to love? I do believe!

Do you believe in the freedom to marry for our gay and lesbian brothers and sisters? I do believe!

Do you believe that God calls you to love tenderly and act justly and to walk humbly with God? I do believe!

Then let us go forth to love and serve God and God's people! Thanks be to God! 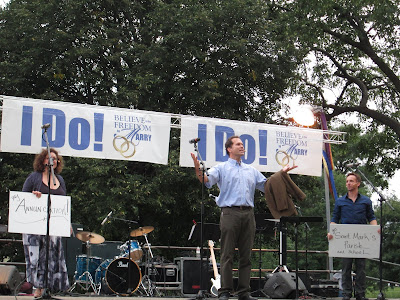 Above: Performers from Table Salt Productions humorously demonstrate how to talk – and how not to talk – with family and friends about the marriage amendment.

Later in the program the following prayer was offered in the form of a Commitment to Action:


May all of us called to engage in conversations about loving relationships for all of God's people come to the table with hearts that are open, transparent, and faith-filled. May our conversations be marked by a deep listening to the voice of the Spirit at work in our world. 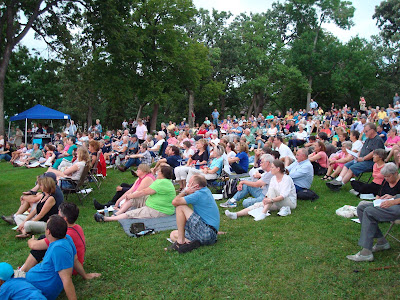 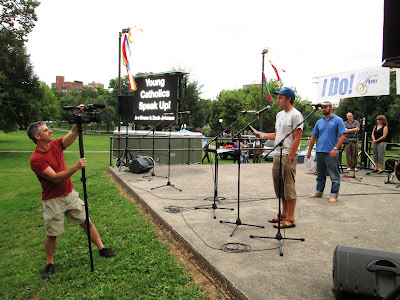 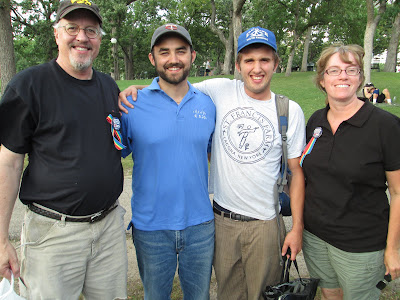 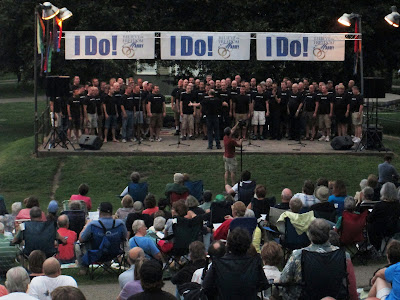 Above: The Twin Cities Gay Men's Chorus performs the song "Marry Us!" at C4ME-MN's August 15 "I Do! Believe in the Freedom to Marry" event. 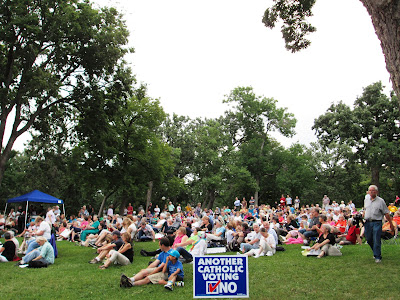 Above: Yard signs by C4ME-MN were made available for the first time at the August 15 event . . . and proved to be very popular! For information about obtaining a yard sign, click here. 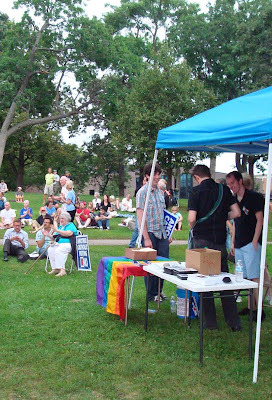 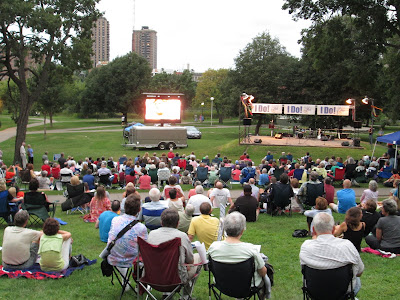 Above: The world premiere of "For All the Children" music video featuring more than 300 Catholics and friends. To view the video and the Star Tribune's video report on its premiere, click here.

For a behind-the-scenes look at its making, click here

For a written report on its making, click here.

Michael and all: I love the video, thoroughly enjoyed the evening in the park, and continue to support the effort to defeat the Marriage Amendment. Blessings, Colleen.

The music video has over 14,000 hits in 9 days! I just heard from a priest in Hong Kong how lovely he thinks it is. I would say that this video represents the church I want, not just on this issue, but in all areas.

You guys did a fabulous job with the event. And, I am so PROUD of the video (even though all we did was sing and give some money to C4ME). It is a treasure!

My wife Betty and I were proud to be there and I was proud as heck to be in the choir that sang “For the Children.” Filming it was an awesome experience.

Keep in mind there is a new danger in the fight for gay and voters’ rights in Minnesota that is just now emerging. This danger could have an enormously negative impact in the fight to preserve these rights if not taken seriously and dealt with appropriately and soon! The details are here.