Shannon Kearns’ Transgender Day of Remembrance Message: “We Are Beloved Children of the Universe” 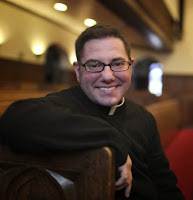 National Transgender Day of Remembrance (November 20) commemorates those transgender people who have died as the result of transphobic violence. According to the official website for this day, hundreds of transgender people have been murdered worldwide in 2013, with more than one dozen having died in the U.S.

Following is an excerpt from a reflection delivered by Fr. Shannon Kearns at the November 10 Dignity Twin Cities liturgy. Kearns is a transgender man and a priest in the Old Catholic Church.

The [Christian] church doesn’t have a great track record on welcoming my trans brothers and sisters. Some days it seems like it would be better to just leave the religion out of it, but on those days when I can manage to get past the rage and the grief and when I find the strength to claim the Bible as my own, in spite of the people who use it as a weapon against me, I find comfort and cause for celebration.

In the book of Isaiah, in the 56th chapter, there is this interesting passage. It says:

Do not let the foreigner joined to the Lord say,
‘The Lord will surely separate me from his people’;
and do not let the eunuch say,
‘I am just a dry tree.’
For thus says the Lord:
To the eunuchs who keep my sabbaths,
who choose the things that please me
and hold fast my covenant,
I will give, in my house and within my walls,
a monument and a name
better than sons and daughters;
I will give them an everlasting name
that shall not be cut off.

Some scholars have said that the eunuch is the closest biblical example we have to modern transgender people. Eunuchs were often outcast from society. They were denied a place in the holy assembly. They were looked down upon and despised. And yet here God is saying that they will be given a name that is better than sons and daughters. Friends, this is good news to transgender and gender non-conforming people. We know what it means to have names chosen for us that don’t fit, or to be called names that are hurtful. We also know what it means to choose names for ourselves that represent all of who we are. And we honor one another by using those chosen names even when others refuse to.

But to have an everlasting name; one that will not be cut off; this is hope for those of us who feel like outcasts. This monument is hope to those who have been killed and to those who worry they will be forgotten. This passage brings me great comfort: to know that I am a beloved son of God and that God gives me an everlasting name, even if my family rejects me, even if the church doesn’t want me, there is a place for me in God’s eyes. This isn’t just some cheap hope. I don’t offer it as a placebo, to say that we should stop fighting for our place at the table, our place in society and the church. Instead I offer it as a raft in the ocean for when the fight gets too hard. I offer it because it’s the best I have to offer. We are beloved children of the Universe and no one can take that away from us. We are beloved children. We are beloved.

See also the previous Wild Reed posts:
• Putting a Human Face on the 'T' of 'GLBT'
• Living Lives of Principle
• We Three . . . Queens

I remembered Stephanie Smith yesterday. I think of her often. She was a beautiful person, a railroad engineer. May she rise in glory.