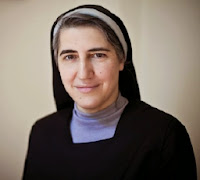 I realize that the "Gay Pride" month of June is over, but I still have a few things I want to post for The Wild Reed's 2014 "Queer Appreciation" series, which traditionally I run throughout June. So here we go . . .

I first read about Teresa Forcades i Vila, OSB last year in a BBC story entitled "Europe's Most Radical Nun." She has garnered this reputation in large part due to her informed and passionate critique of unfettered capitalism. She also has spoken and written about feminism as a form of liberation theology and has openly criticized the Catholic church as misogynist and patriarchal in its structure. Yes, she is truly "radical," in the best and truest sense of the word: she goes to the root of problems in both the church and society.

Thanks to Jayden Cameron over at his always insightful blog Gay Mystics, I came across Teresa's thoughts on queer theology. She originally articulated these thoughts (in Spanish) in an interview at Pikkara online magazine. A full English translation of this interview can be found at Iglesia Descalza.

[I arrived at queer theology] by studying Judith Butler. I appreciate that queer [theology] asserts the unique character of each person, and that any gender, race, national identity tag . . . is a crutch that reflects your fear of personal freedom. The process of spiritualization, Christification, and deification is daring to be a manifestation of love and freedom that are God Himself, when He says “you are made in My image.” Buddhism says that personal identity is fiction and should be overcome because everything is one undifferentiated entity. This personal emptiness is only a first step for you to move on to a unity consciousness. But, with the Trinity, the unity is never beyond the difference. The Trinity says that diversity is as exalted as unity, because unity is one thing and uniformity is something quite different.

The religious analysis that understands sex as something that is intended for procreation is a utilitarian view of human love and is contrary to Christian spirituality. To surrender to the mystery of an interpersonal relationship is to surrender to growing towards being an image of God, towards incarnating what God represents on earth. Upon entering, you receive a gift, that this union could engender a child, but that’s perfectly compatible with you being able to be responsible and use contraception when you please.

The opposite of Christian morality is thinking as if there were two ways to use women’s bodies, usually based on the male perspective: the bad one — using them to give yourself pleasure, which would be lust and which is condemned by all the church fathers, and the other one — using them to give you children, and that’s good. No! It would be denigrating the integrity of the partner, of the other person.

So I think that homosexual love is perfectly understandable to the church, because it has what is essential: it’s not having children, but an open intimacy to an interpersonal relationship that includes respect for the integrity of the other. Two people who love one another, desire one another, and respect one another are giving testimony: this is the sacrament, a visible sign — like baptism — that’s saying, “This creature is accepted in this community as any other.” Trinitarian theology says that all sacraments are an embodiment of God’s love. God the Father, the Son and the Holy Spirit are different but they are not complementary. Love is not necessity; it’s not when I need you because I’m missing something. It can’t be utilitarian love.

NEXT: Omar Akersim: Muslim and Gay

See also the previous Wild Reed posts:
Paul Lakeland on the Church as a Model of Divine Mutuality
The Non-Negotiables of Human Sex
Getting It Right
The Many Manifestations of God's Loving Embrace
The Holy Pleasure of Intimacy