The Gravity of Love

Find the one who'll guide you
to the limits of your choice.

– From "The Gravity of Love" by Enigma

Every now and then at The Wild Reed Friday evenings (and sometimes Saturday's) are "music night." Accordingly, I share tonight the video that Lady Aislinn II has made for the song "The Gravity of Love" by the "musical project" known as Enigma.

By itself, the song conveys drama aplenty, but Lady Aislinn adds even more by artfully pairing the music with scenes from Báthory, a 2008 historical drama written and directed by Juraj Jakubisko and billed as an alternative take on the legend of Countess Elizabeth Báthory.

To be honest, I'm not particularly interested in either the actual Countess Báthory or this film about her. Both seem rather violent and bleak.

However . . . there's a subplot in the film that depicts the artist Caravaggio briefly (but passionately) as the countess's lover. Caravaggio is played by Hans Matheson, who I, er, admire in many ways . . . as does it seems Lady Aislinn. Her video, after all, is largely devoted to scenes involving Hans as Caravaggio and Anna Friel as Countess Báthory. 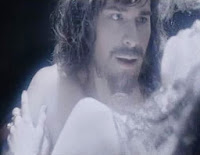 I don't know about you, but as a single guy I must admit I sometimes find myself longing for that type of intensely passionate and sensual relationship depicted in the scenes from Báthory that Lady Aislinn has used to accompany "The Gravity of Love." Indeed, they are scenes that evoke depths of desire and passion that complement not only this song's title but its overall message: that in order to truly live one's life and experience the "gravity of love," one must be prepared to lose oneself in one's passions and desires.

. . . Don't think twice before you listen to your heart,
follow the trace for a new start.
What you need and everything you'll feel
is just a question of the deal.
In the eye of the storm you'll see a lonely dove.
The experience of survival is the key
to the gravity of love.

The path of excess leads to the tower of Wisdom.

Try to think about it.
That's the chance to live your life and discover
what it is, what's the gravity of love . . .

Of course, not everything that is passionate is necessarily loving. I appreciate Lucasta Miller's insightful observations on this often inconvenient truth when, in writing about Emily Brontë's Wuthering Heights, a novel about perhaps the most excessively passionate, at times transgressive relationship in English literature, she notes that it's about a relationship that "generates tensions – between dream and reality, self and other, natural and supernatural, realism and melodrama, structural formality and emotional chaos – but leaves then unresolved." This lack of resolution, says Miller, "is, perhaps, what makes it so haunting."* (Mmm . . . I guess if I had to draw from English literature to epitomize the passionate relationship I seek, I'd opt for Ross and Demelza over Heathcliff and Cathy! And I should add that the gender of those involved in the type of relationship I'm talking about matters not one iota. Gay people are just as capable of finding and building a passionate, loving relationship as straight people. And just as capable of screwing it up.) 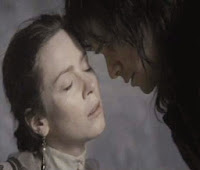 In his film about Countess Báthory, Juraj Jakubisko has clearly sought to express and convey the Wuthering Heights types of tensions; and judging from the scenes contained in Lady Aislinn's music video, I would say he's succeeded.

One last thing before sharing the video: In his invaluable book Sons of the Church: The Witnessing of Gay Catholic Men, Thomas Stevenson raises some important questions for gay men and even suggests some distinctions that can be made when discussing promiscuity. He writes, for instance, that:

[One] way to speak of the distinction being made about promiscuity is to say, in a manner that will appear tautological, that there is a difference between losing oneself and losing oneself. On the one hand, our witnesses are concerned with the ways in which promiscuous behavior can leave one with a sense of emptiness, or destroy one’s self respect or even one’s life. These are very real possibilities of losing oneself. On the other hand, there is the losing of oneself in an ecstasy of giving and receiving persons. Whereas the first way of losing oneself tends to lead, in matters of degree, to nothingness, the second tends to lead, in matters of degrees, to fullness and bliss. (But then, approaching things from yet another angle, it can happen that in taking the path of pursuing empty relating, one realizes one’s need for redemptive love. . . . [A]ll roads can lead to God).

. . . or as Enigma expresses it in "The Gravity of Love," the path of excess leads to the tower of Wisdom.

* From the preface of the Penguin Classics' 2003 edition of Wuthering Heights.

I loved your article and stole a few lines from it for my Facebook post. hope you don't mind ;)