Rallying in Solidarity with the Refugees of Syria and the World 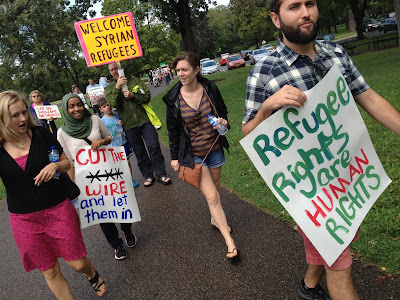 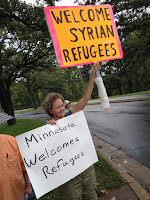 Last Sunday I joined with around 50 others in Minnehaha Park to show solidarity with the hundreds of thousands of people undertaking the dangerous journey to Europe from Syria, Iraq, Afghanistan, and other war-torn parts of the world.

Following is how the rally organizers, lead by 26-year-old Syrian American and University of Minnesota law student Suzan Boulad, described the purpose of our gathering.

We are a coalition of activists, movements, and humanitarians in support of all human beings fleeing from state violence. We demand an end to inhumane treatment of refugees, an end to tight border regulations and border walls, and an end to police abuse of refugees and immigrants everywhere.

We call on our allies to pressure the U.S. government to open its doors to more Syrians seeking refuge, to create solid community networks that support Syrian refugees in the U.S. and abroad, to always stand in solidarity with Syrians fleeing the violence of the Assad regime and other actors and in solidarity with all peoples fleeing state violence, and to make conscious and constructive connections in solidarity, particularly to victims of state violence in the U.S. and to Central American communities attempting to cross their own treacherous border into the U.S.

We are the seed of action. We will not consume images of tragedy passively. We will fight for the basic rights of all people to safety, security and shelter while supporting every effort to return justice and peace to our homelands. 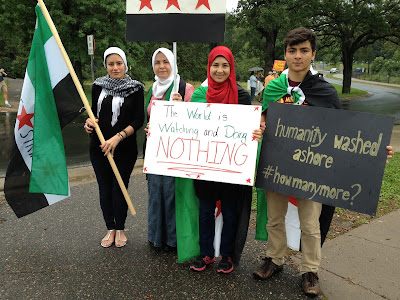 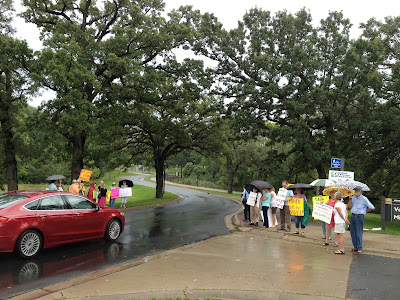 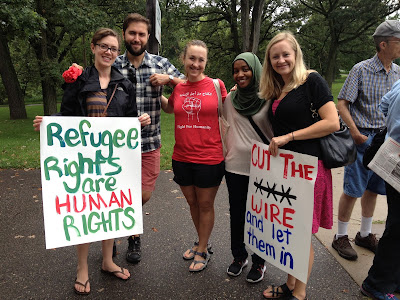 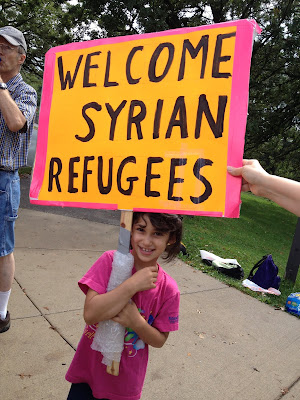 The unfortunate division within the local justice and peace community (and, indeed, the international anti-war movement) over the situation in Syria was recently brought into sharp focus by the following comment addressed to "Paul," a member of Veterans for Peace, by Andrew Scott Berman of Communities in Solidarity with the People of Syria (CISPO). From my perspective, I think it's unfortunate when, as a community of justice and peace activists, we fail to grasp the complexities of a situation like the war in Syria, and thus the reality that there are numerous players that bear responsibility for the violence and subsequent refugee crisis. 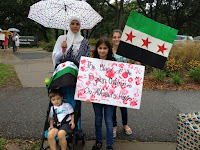 Let the historians debate who was the greatest aggressor of all time. I think the honest position is to condemn ALL war crimes, regardless who commits them. Why can't you do that?

Right now the bloodiest war on the planet is in Syria. In Syria it is Russia that supplies the most weapons. It is Russia that keeps the fascist dictator in power, a regime that has industrial level torture, and drops barrel bombs on civilians, burying children alive under the rubble of their homes.

Yes, there are "true believers" that are in denial. There are dogmatists who shut their eyes to Assad's war crimes because they say that U.S. war crimes have been worse. That is reflected often in posts on this Veterans for Peace site.

There are outright apologists and defenders of the brutal butcher Assad.

There are conspiracy wackos who say that all the photos, all the videos, all the evidence of Assad's war crimes are manufactured, and that the United Nations, Amnesty International, Physicians for Human Rights and other honorable organizations which have pointed out Assad's crimes are all part of a vast U.S./NATO/CIA conspiracy. Those voices also are often heard on the VFP site.

There was a time when Russia was a socialist nation and some people were hesitant to criticize it for that very reason. Today Russia is a capitalist oligarchy, and behaves as such.

The moral hypocrisy of ignoring/defending/denying Assad and Russia's war crimes holds back the growth of the peace and justice movement.

Give it some thought. 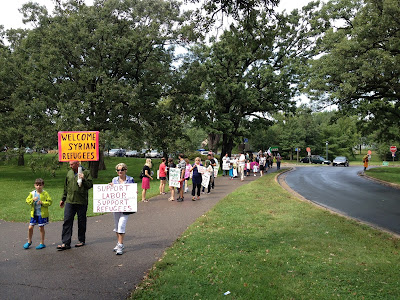 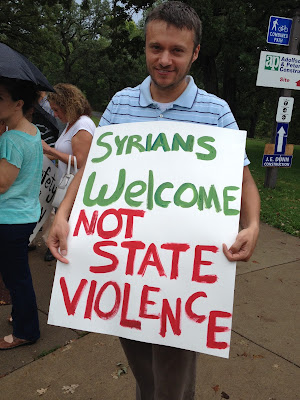 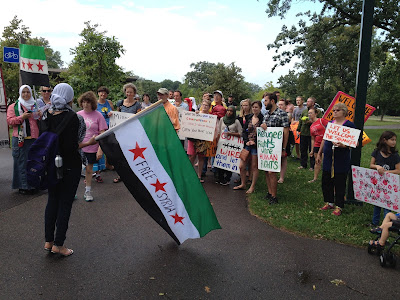 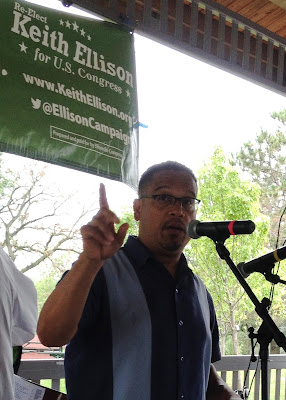 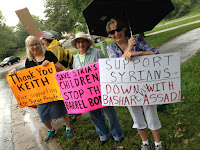 Above: Congressional Representative Keith Ellison, who was hosting a Labor Day picnic in Minnehaha Park close to where we gathered for our rally, voiced his support for refugees worldwide and thanked us for our witness of solidarity.


I close with another commentary on the unfortunate split in the local justice and peace community, a split most evident around the issue of Syria. This commentary is by "Nathan" and was first published on Facebook.

I was active in the Twin Cities anti-war movement for years, but after watching the authoritarian Marxist left take over great organizations like WAMM and marginalize and smear honest, caring and good-hearted activists, I moved all my energy into efforts like Idle No More and Black Lives Matter. It's horribly sad that people who claim to be working for peace are more than willing to use domination tactics and operate from the same power-over, domination based model that those they fight against operate out of.

. . . [W]hen it comes to the radical left, there seems to be no end of absurd turf battles between various factions of progressives, Marxists, and anarchists. In all cases, those who uphold the nuanced, difficult-to-pin-down truth of the times are marginalized, cast aside, and in extreme cases eliminated all together. Instead of building vast coalitions capable of upending this huge, oppressive mess, tiny groups cannibalize other tiny groups on the left and demonize all those who deviate in any manner from their chosen "party line."

Frankly, after nearly two decades of attending and occasionally helping to organize anti-war meetings, rallies, and actions in multiple US states, I'm convinced that the majority of folks involved do not seek the peaceful world they say they do. Instead, what they seem to seek is a world that upholds their views, and theirs alone. They aren't against domination and power over systems, only those ones that currently exist.

. . . I sincerely hope that the coming generations of activists learn from all this, and recognize that beneath all the differences in policy and political views is the real elephant in the room that needs to be recognized and remedied. Namely POWER. There will be no true peace or justice until power-over models are replaced with power-with models of living and working together.

UPDATE: How a Trip to the Heart of the Syrian Civil War Inspired a Young American to Become a Law Student – Jared Goyette and Angilee Shah (PRI, October 19, 2015).