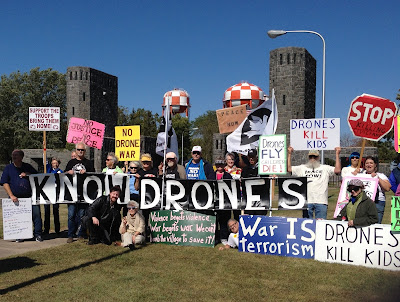 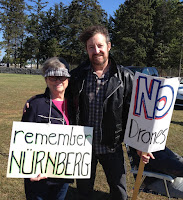 Earlier today some friends and I traveled from the Twin Cities to Little Falls, Minnesota where we joined with 30 others outside the gates of Camp Ripley to protest the U.S. military's use of weaponized drones.

Why protest the use of these types of drones? In reading about the issue I've come to learn that there's at least three valid reasons: weaponized drones are expensive, they're illegal, and they terrorize.

One Predator drone, for example, costs $4.5 million and requires 168 people to keep it airbourne for one hour.

In terms of their legality, weaponized drones are a violation of International Law and the Geneva Convention, primarily because they violate the sovereignty of another country. Also, drone assassinations by the U.S. government/military are without oversight or judicial process. 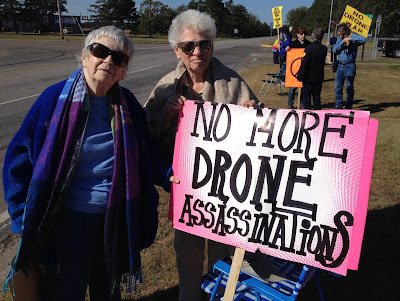 Furthermore, only 2% of those killed by weaponized drones are actually leaders of terrorist groups. Not surprisingly, the use of weaponized drones fuels insurgent movements in places such as Iraq, Afghanistan, Yeman and Pakistan and creates hatred of the U.S. in these countries and elsewhere.

Camp Ripley is the largest military training base in the Midwest. Soldiers are trained here to operate Shadow Drones, which are weaponized and, according to Camp Ripley Range Regulations, are currently used for bombing.

Today's protest and vigil was organized by the Brainerd Area Coalition for Peace. A number of those who traveled up from the Twin Cities did so as members of Veterans for Peace MN and Women Against Military Madness (WAMM). The vigil lasted three hours and was followed by a potluck at nearby Belle Prairie Park. 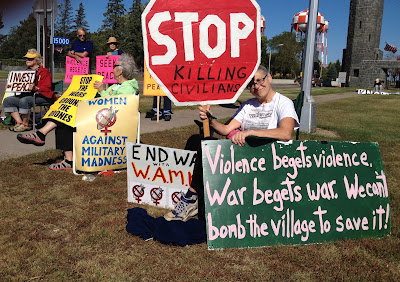 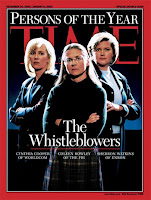 You may recall that Coleen jointly held TIME magazine's "Person of the Year" award in 2002 with two other women credited as whistleblowers: Sherron Watkins from Enron and Cynthia Cooper of WorldCom. She also received the Sam Adams Award for 2002.

Americans are being led to believe that [drone strikes] are killing "high level terrorist combatants" . . . but they're not paying attention to the fact that we're killing a lot of civilians and that it is actually counter-productive because the drones terrorize. If we are terrorizing the rest of the world, how can we possibly be "winning hearts and minds"? Our own military says that there is no military solution. . . . General McChrystal admits that we are creating ten new enemies for every one person killed. So it's an exercise in futility. 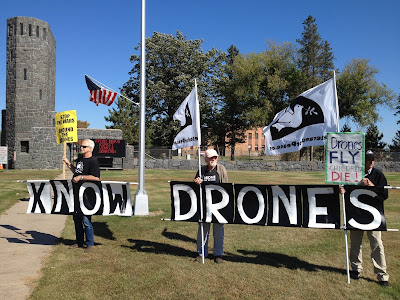 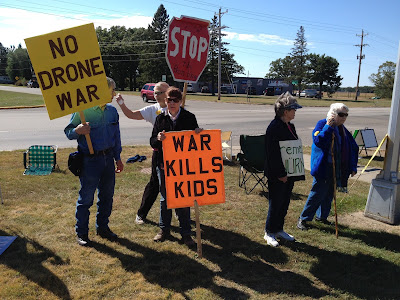 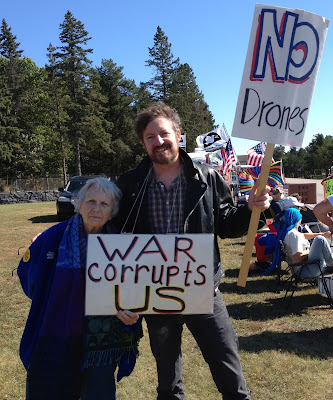 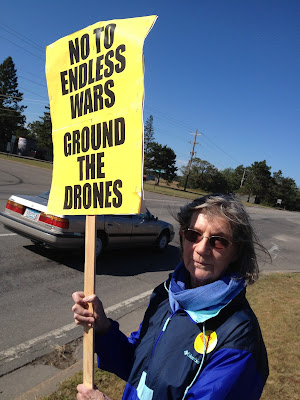 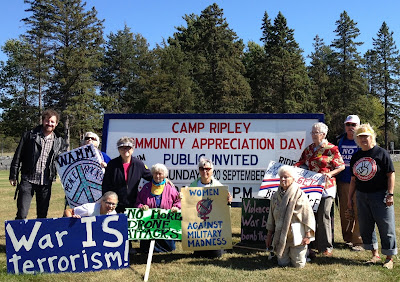 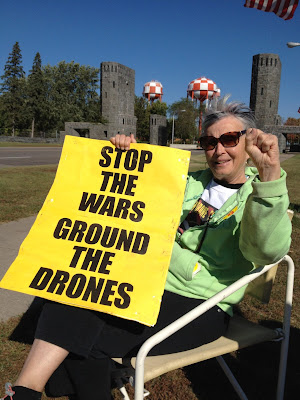 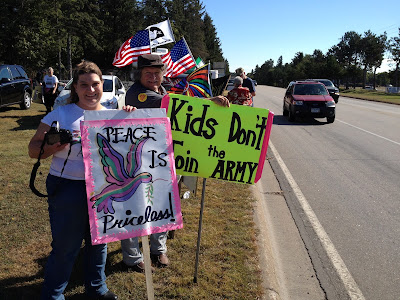 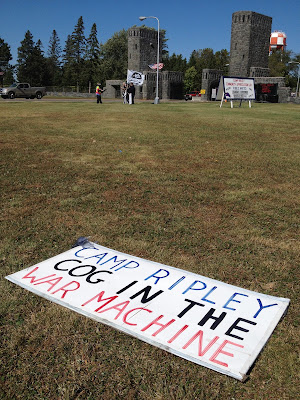 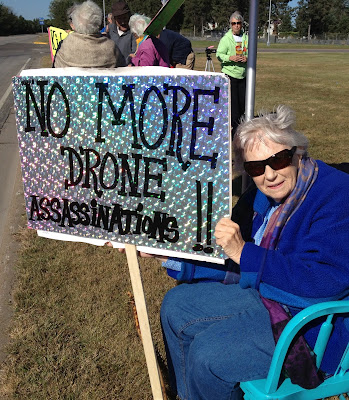 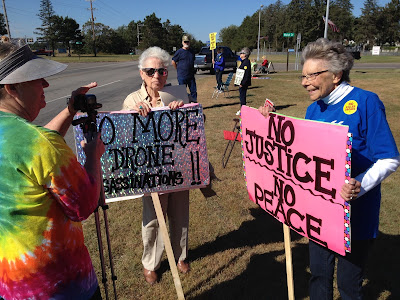 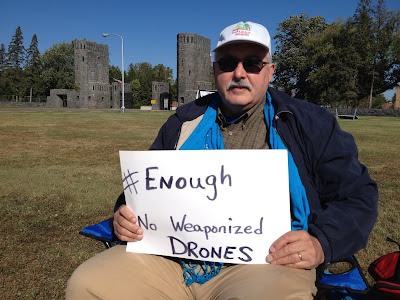 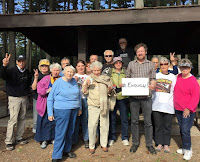 Above: My friend Steve Clemens' sign is a reference to the People’s Agreement to Abolish War, an initiative started by justice and peace groups in Afghanistan. Following is the text of this Agreement.

We, the people of the human family, agree to abolish war.

Like you, we are tired of wars. War costs us everything and resolves nothing. War has increased ‘terrorism.’ Wars risk spiraling into our destruction by nuclear weapons.

To abolish war, we form small, local peace circles or communities of two or more persons in which we agree to ban weapons and war and to build nonviolent systems for every aspect of life.

With autonomous alternatives, we no longer need to participate in today’s warring systems. We opt out, and we withhold support and money from any individual or group that uses war.

We nurture egalitarian relationships with nature and all human beings and connect to form a critical mass that’s free of borders, going beyond our separate causes and working together for a green and equal world without war. A critical mass is crucial as we can’t abolish war without reversing global warming and inequality; these are global crises driven by the same elite who rule over us by force. We abolish war person by person. We won’t wait for the elite, because they’re the ones who keep waging wars.

We make no distinction as to who wages the war, the scale of the war or the individual justifications for the war. We renounce all violence and wars and agree never to resort to war in any circumstance.

We, the people of the human family, agree to abolish war. 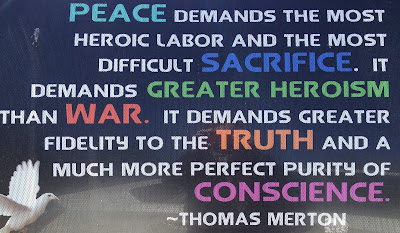 See also the previous Wild Reed posts:
• Quote of the Day – May 4, 2013
• Steve Clemens: "If We Wish to Stand with the Holy Innocents, We Must Stand in Opposition to Empire"
• Award-Winning "Hellraisers" At It Again
• Alliant Action
• In Search of a "Global Ethic"