"I Am a Happy and Proud Gay Priest" 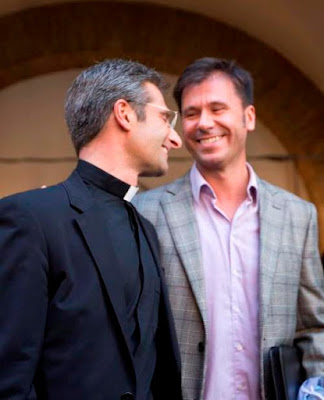 And he does look happy, doesn't he?
He and his boyfriend.

I'm happy for them both.

The priest is Monsignor Krzysztof Charamsa, who was fired yesterday from his mid-level position in the Vatican's Congregation for the Doctrine of the Faith after coming out in newspaper interviews in Italy and Poland. In these interviews he said that he was happy and proud to be a gay priest, and that he was in love with a man whom he identified as his boyfriend. Charamsa's firing sadly confirms my previously expressed contention that truth-telling is the greatest of sins in a dysfunctional church, and must therefore be swiftly punished. Still, I remind myself that expulsion is often the cost of true discipleship. I also take heart from the fact that Charamsa's courageous stance is a hopeful sign that not all gay men in the Vatican are giving the rest of us a bad name.

Francis DeBernardo, Executive Director of New Ways Ministry, has issued a thoughtful statement on both Charamsa's coming out and his firing. Here's part of what he writes: 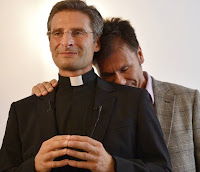 [Monsignor Charamsa's] revelation is an acknowledgement of the truth of the way God has made him, and, like millions of other LGBT Catholics, his self-acceptance and self-affirmation will help him better understand God’s love for him. For the Catholic Church, his news is another step in our growing process of coming to better terms with our LGBT brothers and sisters.

It is sadly disappointing that the Vatican fired him when they learned of his announcement. He now joins the long list of LGBT people and allies who have been fired from jobs in Catholic institutions because of LGBT issues. It is unfortunate that Church leaders did not see Charamsa’s announcement as an opportunity for further dialogue with someone they have known and trusted.

We hope that his news will help the bishops of the world gathering in Rome this weekend for three weeks of synod discussions which will include pastoral outreach to families with LGBT members. His witness to the holiness of the lives of LGBT people and the goodness of their relational lives could help these church leaders discern more appropriate and accepting forms of pastoral care. His testimony of struggle and overcoming fear should help these bishops see the challenges and joys that many LGBT people and their families face.

Of course, I've long concluded that there will never be "more appropriate and accepting forms of pastoral care" that are universal and lasting until the official teachings of the church on both gender and sexuality are changed – a process that can only begin with these same teachings being forthrightly challenged and named for what they are: erroneous and dysfunctional. In her recent op-ed, "The Pope's Encore: Reforming the Church," theologian Mary E. Hunt rightly considers the promulgation of such theological teachings as an example of an "anti-LGBTIQ effort" and thus "morally repugnant." Yet, as you'll read below, she also offers a "papal next step" toward the development of a "healthy, good, natural and holy" theology of sexuality.

It is time to end the gay charade in the Roman Catholic Church. The sea of men in every church and papal meeting during the U.S. visit underscored a homosocial power structure. It is an open secret that a high percentage of clergy and religious leaders are same-sex loving people, whether sexually active or not. For those same men to collude in anti-LGBTIQ efforts, including legislation and theology, is morally repugnant. A papal step next step would be to speak openly and frankly about the range of sex/gender options among Catholics and help people see the many healthy, good, natural and holy ways there are to love.

I'm happy that Monsignor Charamsa is modeling for the members of the hierarchical church this "next step." I just love the images of him and his partner Eduard. May the Spirit of clarity and love which inspired their relationship and compelled Charamsa to embody and speak his truth, similarly inspire and transform the hearts and minds of all within the clerical caste of the Roman Catholic Church. Let the transformation of this terribly dysfunction system and its impoverished sexual theology begin!

See also the previous Wild Reed posts:
• Truth-Telling: The Greatest of Sins in a Dysfunctional Church
• When Expulsion is the Cost of Discipleship
• Homosexuality and the Priesthood
• Officially Homophobic, Intensely Homoerotic
• A Fact That Should Be Neither Surprising Nor Derogatory
• Let's Face It: The Catholic Church is a Gay Institution . . . and That's a Good Thing!
• Vatican Stance on Gay Priests Signals Urgent Need for Renewal and Reform
• Report: Homosexuality No Factor in Abusive Priests
• Catholic Church Can Overcome Fear of Gay People
• The Many Manifestations of God's Loving Embrace
• What Is It That Ails You?
• What the Vatican Can Learn from the X-Men
• Trusting God’s Generous Invitation
• Sons of the Church: The Witnessing of Gay Catholic Men - A Discussion Guide
• Remembering and Reclaiming a Wise, Spacious, and Holy Understanding of Homosexuality
• Remembering John McNeill

The vast majority of clerics just don't get it. Probably never will. As a woman, (and mother of a gay person), I can't imagine belonging to this church anymore. When all is said and done, it seems to me that there is no legitimate place for women or gays in Roman Catholicism, despite the fact that some parishes support marriage equality. The foundational platform of the hierarchy unapologetically includes overt discrimination against women and gays. At times I even feel sold out by my still-practicing friends . . . if they are not actively involved in church reform efforts. It's like they know the discrimination is wrong, but just don't have the energy to deal with it. That's how people let down their friends, their communities, their country . . . they just don't have the energy to deal with stuff. Three cheers for the activists out there. Wish there were more of you/us.

I hope that his courage will inspire others in the church to be bold and daring – each as they feel called.