Celebrating the Coming of the Sun and the Son 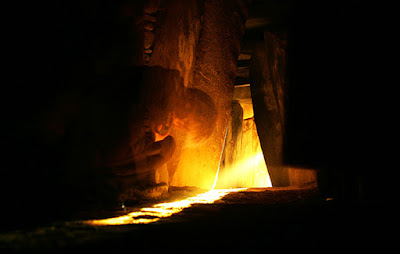 The winter solstice occurs tonight . . . which is a perfect time to share the following from a recent homily delivered by Loretta at Spirit of St. Stephen's Catholic Community.

Several years ago while visiting in Ireland, the coming of the Sun, our wonderful star in the sky which sustains our earthly life, was concretely illustrated to me. This happened in Newgrange, the site of a 5000 year old civilization. At Newgrange there is a burial mound that was constructed to celebrate the coming of the Sun which occurs on or about December 21st, the time of the winter solstice, which is the shortest day of the year, and after which the days begin to grow longer. Hence, the coming of the Sun.

The early Celtic architects constructed an entrance into the burial mound which consists of a doorway with a rather small opening at the top and then a long, narrow passageway beyond that leading to the rear of the burial mound. At the time of the solstice, the sun, if it is bright enough, and that can be questionable on any given day in Ireland, the sun will direct its light through this small opening and illuminate the narrow passageway all the way to the back of the burial site.

It is no coincidence that Christmas, the coming of the Son, Jesus the Christ, and the Celtic pagan festival of the coming of our star Sun, fall at the same time of the year. Many of our Christian holy days occur at times similar to much older pagan festivals. So, there is a very long tradition of celebrating the coming of the Sun and the Son, and the “concept” of Advent, of watchful waiting, predates the birth of Jesus and is tied to the cycles of our earth. I like this concept of continuity in our world.

I am glad that I am a woman who has lived many years on this planet because I have found that with age comes a certain amount of wisdom and understanding, particularly as it relates to my own spirituality. There was a time when my God was a “sky God” a God who lived up in the heavens while I resided way down here. Suffice it to say, there was a chasm between God and me.

Over the years, that concept of God, the sky God, has changed for me. I now understand that God is not floating around somewhere out there or sitting up in the heavens upon a throne but rather God is in me, and in every living thing, and in every molecule in the Universe.

So, I now welcome Advent as a time to contemplate who and what Jesus is in my life and as an opportunity to deepen my own spirituality rather than a time of waiting for Jesus to make his arrival on December 25th or waiting for Him to show up on Judgment Day riding in on a cloud of glory as our Gospel reading predicted for our ancestors in faith. He’s already here just waiting upon me to notice Him in the tiniest of cells and all the way to the Milky Way and beyond and inviting me to grow in love and in relationship with Him in ever newer and exciting ways.

The season of Advent reminds me of the question that Jesus asked of his disciples, “Who do you say I am?” I have asked myself that question many times over, and my answers today are not the same answers that I would have given at various times in the past.

This radical Jesus I have come to know really shook up the status quo. He welcomed and embraced everyone regardless of their status in life, the dreaded tax collector, the prostitute, women, lepers. He suggested that there was but one law, the law of LOVE – Love of God, Love of self, Love of neighbor, and EVERYONE is my neighbor. Wherever we are connected in “love”, there is the Christ. So, for me, this is another answer to the question, “Who do you say I am?”

I believe that, sort of like me, Jesus grew in knowledge and wisdom and understanding of God, though it seems like he caught on much quicker than I. I love the message of Jesus Christ that provides me with a map for my life. I think this message is both exquisitely simple as well as challenging.

I believe that God’s love is so incredibly expansive that it EXPLODED the Universe into being and that Jesus is part of that explosion of love right from the beginning. So this, too, is who Jesus is for me, the Cosmic Jesus.

So, during this Advent season, I will be striving to “put on the mind of Christ” as l continue to ponder the question, “Who do you say I am?” I am hoping that by Christmas Day I will be one step closer to answering this question for myself, although I know this will continue to be an ongoing question throughout my life.

During Advent, I would like to invite you to ask yourself the question “Who do you say I am?” as you prepare for the coming of the Sun and the Son. See also the previous Wild Reed posts:
• Christmastide Approaches
• The Pagan Roots of All Saints Day
• "I Caught a Glimpse of a God"
• The Most Sacred and Simple Mystery of All