The Paris Climate Talks, Multilateralism, and a "New Approach to Climate Action"

A friend from my college days in Australia in the mid-1980s was a participant in the recent climate talks in Paris, known as COP21. As I'm sure you've heard, what's being declared an "historic deal" on slashing carbon emissions was reached at the conclusion of these talks.

In response to my highlighting on Facebook of an article by climatology researcher James Hansen, in which he denounces the Paris talks as a "fraud," my friend shared the following comment. Although he has given me permission to share this comment at The Wild Reed, he's asked to be identified simply as a "concerned citizen."

This Agreement represents an amazing renewal of faith in multilateralism to address some of the world's complex challenges (and not just for climate change but a whole range of global issues). It's far from a perfect deal but that's called compromise by every one of the 195 countries involved – and compromise is singularly the most critical aspect of any effort to combat any global issue (i.e. don't let the perfect be the enemy of the public good). Importantly, for the first time it has the entire world travelling in the same direction with a common goal and purpose (so, yes it can be done if pursued respectfully). Further, it has all of the international accountability and transparency needed to hold every country (not just a few) to their commitments.

This Agreement was always going to be a framework complemented by initial pledges of climate action (not the other way round), Importantly, the Agreement contains 'no backsliding' clauses ensuring the aggregate level of climate action submitted by nations is a 'floor' not a ceiling - and so nations will be required to 'progress' their commitments every five years (which will be subjected to expert international scrutiny) within a context of reaching climate neutrality (text says something like "balance between emissions and sinks") ... it's little understood, but this Agreement was always the start of a new approach to climate action, not the end game. The fact that long term climate goal of halting temperature rises to a floor of 2 degrees Celsius means that the ceiling of 1.5 is the focus. Net negative emissions/climate neutrality has been now universally accepted as being essential (consistent with the IPCC findings) because at current levels of emissions, we will have used what carbon budget remains within 30 years. 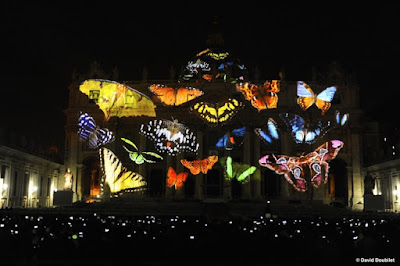 Above: Part of the Vatican's December 8 light show, about which Carolyn Wickware of The Catholic Herald writes:

The opening of the Holy Year of Mercy culminated in a nature-inspired light show, with images of animals and the natural world projected onto the facade of St Peter’s Basilica yesterday evening.

Inspired by Pope Francis’s encyclical Laudato Si': On Care of our Common Home, changing images of endangered animals and nature were projected on the basilica in a three-hour event entitled Fiat Lux: Illuminating Our Common Home.

The show featured images by renowned nature photographers and filmmakers including Joel Sartore from National Geographic.

Writing for the Religion News Service, David Gibson notes that "Pope Francis hopes [the images] will inspire people — and negotiators at the climate change conference in Paris — to battle global warming and protect the environment."