Saying "No" to Endless U.S. Wars 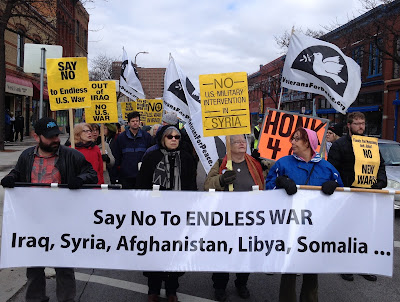 Last Saturday I participated in a rally and march in south Minneapolis that commemorated and mourned the thirteenth anniversary of the "shock and awe" start of the U.S. war in Iraq – a war both illegal and illegitimate and which has claimed the lives of at least 165,000 civilians. (For The Wild Reed's commemoration of the tenth anniversary of the U.S.-led invasion of Iraq, click here.) 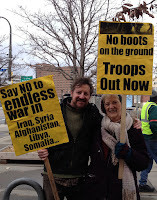 It's a war that actually continues to this day. The Obama administration, for instance, has sent over 4,000 troops to Iraq and is carrying out daily bombing missions both there and in Syria. The U.S. war in Afghanistan also continues, and the U.S. military has launched ongoing strikes in Libya, Yemen and Somalia. With all this in mind, the key message of Saturday's rally, one initiated by the Minnesota Peace Action Coalition, was "Say No to Endless War."

Right: With my friend Marie Braun – Mayday Plaza on Minneapolis' West Bank, Saturday, March 19, 2016. Marie is a longtime justice and peace advocate and member of the Twin Cities based Women Against Military Madness (WAMM). 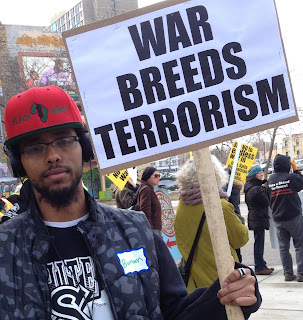 I share this evening some of the photos I took on Saturday, along with an informative piece by The Atlantic's Conor Friedersdorf on the Obama administration's drone program, a program that plays a significant role in the endless wars of the U.S. (You may recall that last September I participated in a vigil against weaponized drones at Camp Ripley, MN. For images and information about this vigil and the issue of weaponized drones, click here.)

Following is an excerpt from Conor Friedersdorf's article, "The Obama Administration's Drone-Strike Dissembling."

The notion that the Obama Administration has carried out drone strikes only when there is “near-certainty of no collateral damage” is easily disproved propaganda. America hasn’t killed a handful of innocents or a few dozen in the last 8 years. Credible, independent attempts to determine how many civilians the Obama administration has killed arrived at numbers in the hundreds or low thousands. And there is good reason to believe that they undercount the civilians killed.

Why the disparity between what American officials claim and what others report? The New York Times provided a first clue back in 2012, when it reported that the U.S. “in effect counts all military-age males in a strike zone as combatants, according to several administration officials, unless there is explicit intelligence posthumously proving them innocent.” The same sort of dishonest standard was described last year when a whistleblower provided The Intercept with a cache of documents detailing the U.S. military’s drone killings in Afghanistan, Yemen, and Somalia. One campaign, Operation Haymaker, took place in northeastern Afghanistan.

“Between January 2012 and February 2013,” The Intercept reported, “U.S. special operations airstrikes killed more than 200 people. Of those, only 35 were the intended targets. During one five-month period of the operation, according to the documents, nearly 90 percent of the people killed in airstrikes were not the intended targets.” That’s one campaign of many in just one country where drone killings happen.

Said the source of the documents: “Anyone caught in the vicinity is guilty by association. When a drone strike kills more than one person, there is no guarantee that those persons deserved their fate. . . . So it’s a phenomenal gamble.”

To read Conor Friedersdorf's article in its entirety, click here. 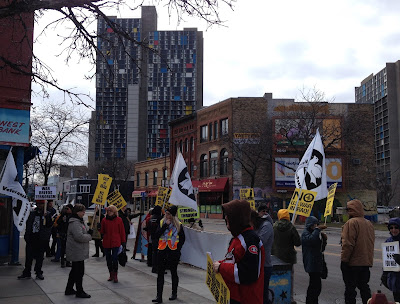 Above: Saturday's anti-war rally and march took place in the Cedar-Riverside neighborhood of south Minneapolis. This was actually the first neighborhood I lived in when I came to the U.S. from Australia twenty-two years ago. Today it's home to one of the largest Somalian communities in the country and, accordingly, is nicknamed Little Mogadishu. 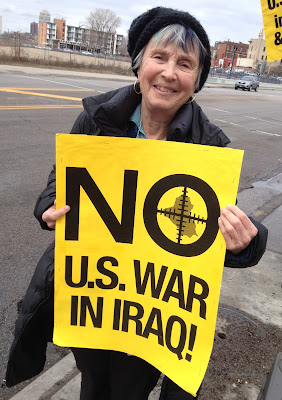 Above: My friend Sarah Martin at Saturday's rally. 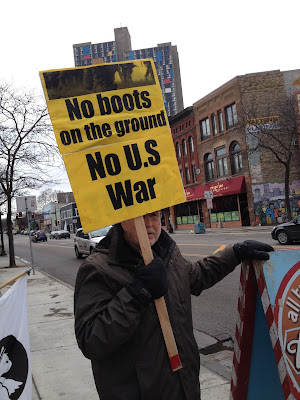 Above: My friend John Braun, husband of Marie (pictured with me earlier in this post). 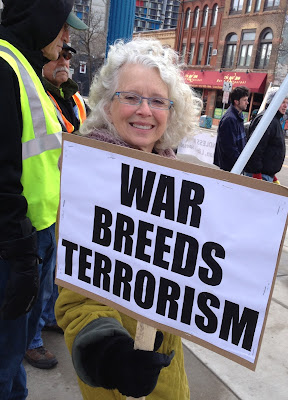 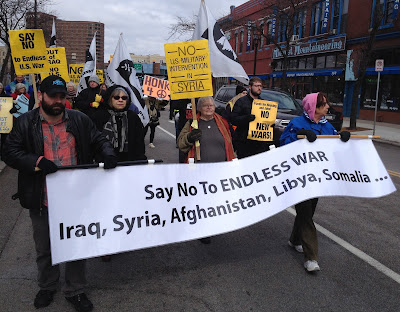 See also the previous Wild Reed posts:
• In the Wake of the Paris Attacks, Saying 'No' to War, Racism and Islamophobia
• Vigiling Against Weaponized Drones
• Rallying in Solidarity with the Refugees of Syria and the World
• Quote of the Day – September 7, 2015
• Something to Think About – June 18, 2014
• The Tenth Anniversary of the U.S. Invasion of Iraq