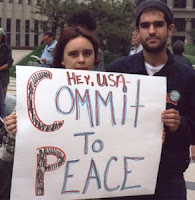 Today is the 15th anniversary of the September 11, 2001 terrorist attacks on the United States. Without doubt, it was a series of horrific events that took place that day in New York, Washington, D.C., and Pennsylvania, and in which 2,996 people were killed and over 6,000 injured.

U.S. President George W. Bush and his administration chose to respond to these attacks by first launching military strikes against Afghanistan and then invading Iraq, all under the guise of what was called the "War on Terror."

From the very start, many of us opposed this "war," as we were convinced that it would simply exasperate the very real problem of global terrorism and fail to address its root causes. Fifteen years on, time has proven these convictions correct, as most clearly evidenced by the Afghan War quagmire and the rise of ISIS.

I wrote and sent the following letter to advice columnist Jeanne Phillips (aka Abigail Van Buren or "Dear Abby") in 2002. It was never published, but I can recall at the time feeling that it was important to formulate and express opposition to the "War on Terror" in a calm and concise manner. That, at least, is what I attempted to do with this letter. Why "Dear Abby"? She had recently expressed support for the "War on Terror" in one of her columns. 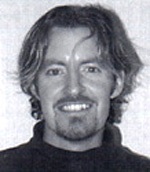 At the time I wrote this letter, fourteen years ago, I was 36 and working as the director of a justice education program at Spirit of the Lakes United Church of Christ in Minneapolis. I was also the founder and lead organizer of a Twin Cities-based activist group called Queers United for Radical Action (QURA). The members of QURA (and, truth be told, there were never more that a dozen or so of us) described ourselves as a "network of LGBT activists dedicated to educating ourselves and the wider LGBT community on the threats to democracy, human life, and the environment posed by the nexus of corporate globalization, militarism, and environmental degradation." We also sought to organize and participate in educational events and non-violent direct actions in order to facilitate positive and radical social and economic change, and to facilitate and share a uniquely queer spirit of resistance to all forms of oppression.

I was very disappointed to see your column being used as a propaganda tool of the Pentagon ("Secretary of Defense Thanks the Military," 5/24/02). Contrary to your insistence, we are not all "united" in support of the so-called "War on Terrorism." Over 50,000 U.S. citizens, for instance, including many who lost loved ones in the terrorist attacks of September 11, converged on Washington, D.C. on April 20 to express the growing global realization that war is not the way to address and eradicate terrorism. Currently, thousands are preparing to launch the "Not in Our Name" campaign on June 6.

Your response to the Secretary of Defense implies that the patriotic thing to do is to unquestioningly support an open-ended, perhaps never-ending war. This is not patriotism. This is not in the best interests of our nation or our children.

A more authentic expression of patriotism starts with courageously asking the question, "Why is the U.S. hated by so many?" The answer, as many are aware, is not because of our perceived freedoms. The truth is that the U.S. is hated because aspects of U.S. foreign policy do violent and destructive things to people all around the world. This fact was acknowledged as long ago as 1968 when the Reverend Martin Luther King, Jr. declared that "the greatest purveyor of violence on the world stage is the United States government."

Indeed, in numerous cases around the globe, the willingness of the U.S. to maintain economic dominance through oppression and violence has led to the deaths of untold millions. This too is a type of war – a war on the poor, a war on the planet. It is a war in which Secretary of Defense Donald Rumsfeld doesn't need to implore our involvement, as we're already part of it. We benefit, after all, from the exploitation of Third World workers and the environment through cheap sweatshop-produced products and cheap oil. Our military interventions and support of oppressive regimes protest and expand our corporate interests and thus our bloated lifestyle – a lifestyle that was once described to the rest of the world by George Bush, Sr. as "not negotiable."

Such realities in no way justify the tragic and criminal acts of September 11, but they do help explain why some may feel moved to desperately lash out at the most visible symbols of U.S. foreign policy – the World Trade Center and the Pentagon.

How then do we respond to such extreme and destructive acts? More violence is not the answer. I feel genuinely sorry for the young men and women duped into believing they are fighting a war on terrorism when in fact they are being used to secure and expand the bloated and unsustainable American lifestyle – one that is far from economically democratic, as is evidenced by the increasing gap between rich and poor. Furthermore, the actions of the military will breed more terrorists.

There are better ways to respond to the events of September 11 than bombing other nations and killing thousands of innocent people – which is what has happened in Afghanistan. Rather than launching a "war on terror," the criminal justice system should have been utilized as it was after the first attack on the World Trade Center in 1993. That strategy saw those responsible apprehended and jailed. Yet bringing the criminals who planned the September 11, 2001 attacks to justice is only part of he truly patriotic response. If we really love our country and our children we will want to ensure that such an attack never occurs again – anywhere.

Accordingly, we need to inform ourselves and others of the domination and violence that undergirds, shapes and directs U.S. foreign policy. We then need to boldly denounce this domination and violence and pledge ourselves to address the root cause of terrorism – economic and social inequality. As we honestly confront our own role – individually and collectively – in a grossly unfair and ultimately suicidal global economy, sacrifices will need to be made.

Only be engaging in such challenging actions will we eradicate terrorism, ensure our nation's security, and herald a new day of global compassion, justice, and peace.

Let us not align ourselves with the clouds of war that obstruct the dawning light of such a tomorrow.

See also the previous Wild Reed posts:
• Quote of the Day – September 11, 2015
• Something to Think About – September 11, 2013
• Kittredge Cherry on Mychal Judge, the "Gay Saint of 9/11"
• In Mychal Judge's Heart "There Was Room for Everybody"
• Before (and After) the Poison
• Karen Armstrong on the 9/11 Attacks: A “Flagrant and Wicked Abuse of Religion”
• Rebecca Solnit on How 9/11 Should Be Remembered
• 9/11: Seven Years On
• Remembering September 11 and Its Aftermath
• Let’s Also Honor the “Expendables”
• Praying for George W. Bush
• The Tenth Anniversary of the U.S. Invasion of Iraq
• Thoughts on Prayer in a "Summer of Strife"
• Discerning and Embodying Sacred Presence in Times of Violence and Strife