Ilhan Omar: Stepping Into Her Power 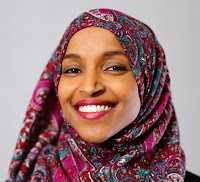 My congressional representative Ilhan Omar (D-MN) was recently a guest on The Late Show with Stephen Colbert.

The interview was truncated for broadcast but the following video contains Omar's full interview with Colbert. It's followed by an article on Omar that was first published March 28, 2019 by Vogue.

Ilhan Omar: “To Me, the Hijab Means Power,
Liberation, Beauty, and Resistance” 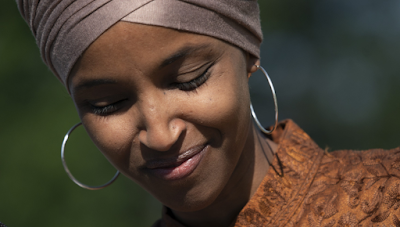 By Alexandria Gouveia
Vogue Arabia
March 28, 2019
Twenty years after becoming a US citizen, Ilhan Omar made history in her adopted country. With her hand on her grandfather’s Qur’an, she was sworn into the US Congress, becoming the first hijabi member to do so. The scene was all the more poignant as it marked the lifting of a 181-year-old ban preventing anyone from wearing any kind of headwear in the chamber. Along with Rashida Tlaib (who doesn’t wear a hijab), she was also one of the first two Muslim women to enter Congress, and the first Somali-American. 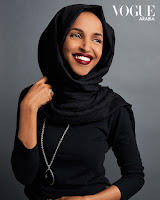 How does she feel about the pressure on her shoulders? “That’s a loaded question,” she laughs. Her voice is soft but by no means meek. “It feels enormous to have the opportunities to carry those identities and to have people see themselves represented in such a way, but it also feels heavy because being the first doesn’t come with a rule book. Wanting to do right by it so that I’m not the last, is also lots of pressure.”

Omar’s mother died when she was two and she was raised by her father and grandfather. As extreme optimists, they taught Omar that “today does not determine your tomorrow.” It’s a life lesson she has repeatedly turned to during her most challenging days – from being a refugee to being a black, Muslim, hijabi woman in the US. Her family fled the Somali civil war in 1991, staying in a refugee camp in Kenya for four years, before resettling in the US. Here, she was confronted with the differences between her and her new home. “It was the first time that all of the identities I carried and had pride in, became a source of tension,” she recalls. “When you’re a kid and you’re raised in an all-black, all- Muslim environment, nobody really talks to you about your identity. You just are. There is freedom in knowing that you are accepted as your full self. So the notion that there is a conflict with your identity in society was hard at the age of 12.”

As the US representative for Minnesota’s 5th congressional district, one of Omar’s policies includes promoting and establishing a just immigration system; something that is at odds with the current political climate in the country. “It’s challenging,” she says of living in President Trump’s America, where her status and heritage is constantly criticized. “It’s an everyday assault. Every day, a part of your identity is threatened, demonized, and vilified. Trump is tapping into an ugly part of our society and freeing its ugliness. It’s been a challenge to try to figure out how to continue the inclusion; how to show up every day and make sure that people who identify with all the marginalized identities I carry, feel represented. It’s transitioning from the idea of constantly resisting to insisting in upholding the values we share – that this is a society that was built on the idea that you could start anew. And what that celebrates is immigrant heritage.” 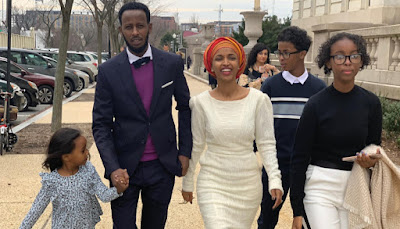 Wearing her hijab allows her to be a “walking billboard” not only for her faith but also for representing something different from the norm. “To me, the hijab means power, liberation, beauty, and resistance,” she says. She has a son, Adnan, and two daughters with husband Ahmed Hirsi. Whether her girls, Ilwad and Isra, want to wear the hijab, is up to them, she says. “I grew up in a religious society and my father and grandfather believed that their role was to teach right from wrong. For me, that is how I raise my kids. I work to remove obstacles so they can live at their best and happiest selves,” she says. “If that translates to adapting the hijab, that’s fine. If they don’t, that’s also fine. They have freedom of choice. Society tends to place lots of limitations, depending on what gender you are. I want my kids to be free.” She wants to share this approach with all women, advising them to be themselves. “Walk in your own path. We are as much worthy of joy, power, and pleasure as the next human. We are deserving and we don’t need permission or an invitation to exist and to step into our power.”

Related Off-site Links and Updates:
Ilhan Omar: Who Is Minnesota's Somalia-born Congresswoman? – Toby Luckhurst (BBC News, April 18, 2019).
“Your Story Will Be Written”: Ilhan Omar's Stormy Rise – Briana Bierschbach (MPR News, April 18, 2019).
How Democrats Did, and Did Not, Defend Ilhan Omar – Robert Mackey (The Intercept, April 14, 2019).
Ilhan Omar Is Unlike Anyone Who Has Served in Congress. This Is Her Complicated American Story – The Washington Post (July 6, 2019).
In Context: Ilhan Omar’s “Our Country Should Be More Fearful of White Men” Comment – Amy Sherman (PolitiFact, July 26, 2019).