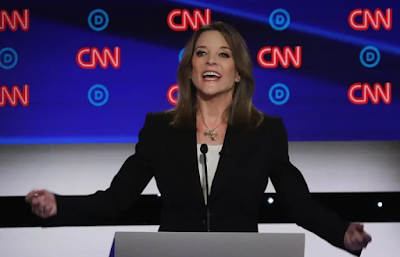 Well, it seems that author and spiritual teacher Marianne Williamson has become a credible presidential candidate. 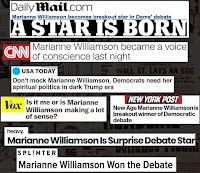 I say this because a month ago her presence in and contribution to the first Democratic presidential candidates' debate drew ridicule and derision from most mainstream media pundits. She was dismissed, in other words, as not being a credible candidate; as unthreatening. Yet now, after her success in the first night of the second debate (see the headlines at right), the knives have come out. She's clearly being viewed now as enough of a candidate to be a credible threat to business-as-usual politics and to the way the status quo insists things such as a presidential candidacy should look like and be conducted.

No longer considered merely a “kooky” or “joke” celebrity candidate, Marianne Williamson is being described in some quarters as the “dangerous” mirror image of Donald Trump. It's absurd, I know. But it goes to show just how far much of the corporate media and other gatekeepers of the political and economic status quo will go to undermine and discredit a genuinely progressive voice.

For her part, Williamson has responded to all of this by saying the following.

They’re no longer ignoring us. They’re still laughing but with some nervousness in their voices; and we are now moving into some serious resistance to the emergence of our campaign – lies about my stance on medicine and science, etc. Those who support the campaign need to get serious now; one of the themes has always been that we need to become as convicted in our love as some people are convicted in their fear.

I dare say I'll write more about this backlash against Williamson and her campaign in a later post. She is, after all, the candidate I'm most passionate and energized about supporting at this stage of the presidential race, for reasons that I outline here.

Tonight I share Caitlin Johnstone's recent op-ed in which she compellingly contends that it is not Marianne Williamson, "the lady talking about love and slavery reparations," whom should be consider a “freak,” but each and every "seasoned career politician.”

Night one of the CNN Democratic debates has come and gone, and if you missed it you didn’t miss much. Basically the entire thing can be summed up as Jake Tapper asking the progressives on stage, “So explain why Americans would vote for your policies when we here at CNN have been telling them for years that they’re not allowed to support those policies?” Then for balance they ask one of the boring centrist candidates to explain why Bernie Sanders is crazy. Repeat for two and a half hours.

Disrupting the monotony was Marianne Williamson, who once again was the most-searched candidate following the debate. She raised eyebrows by using the phrase “dark psychic forces” to describe Trump’s demagoguery, prompting many ironically ironic tweets from ironically ironic people eager to make fun of how weird and ridiculous this self-help guru woman is. Which to me is a bit odd seeing as the people she’s being compared to are status quo politicians, who are some of the most freakishly insane creatures on this planet.

I am not a fan of Marianne Williamson, nor of anyone else in this primary race for that matter. But the candidates who push against the status quo in some way do tend to highlight various aspects of the oppression machine in ways I find interesting, and the reaction to Williamson is certainly no exception.

I mean, this same debate saw Mayor Pete Buttigieg saying that “assault weapons, things like what I carried overseas in uniform . . . have no business in American neighborhoods in peacetime, let alone anywhere near a school.” In other words, such weapons don’t belong in America, they belong overseas murdering foreigners for crude oil and Raytheon profit margins. This argument is becoming more and more common in America’s gun control debate, and the only reason people don’t shout and shudder in revulsion upon hearing it is because the propagandists of the political/media class have normalized military mass murder in mainstream American consciousness to such a severe extent.

This same debate also saw former Colorado governor John Hickenlooper argue that US troops should remain in Afghanistan for “humanitarian” reasons and to protect “the condition of women”, apparently in an attempt to court the key voting demographic of people who have been sealed in a soundproof time capsule since 2001. He literally said “Look at the progress that’s happened in that country.” With his literal face hole.

This same debate also saw Montana Governor Steve Bullock extolling the merits of keeping a nuclear first strike policy on the table for the United States. This man sincerely argued that it is good and right for the United States to be prepared to use nuclear weapons even when not attacked with nuclear force, and for other nuclear-armed nations to see this and know this. This is clearly an omnicidal, psychopathic position which threatens every organism on our planet, but today everyone’s talking about Marianne Williamson and energy crystals.

These people are freaks. If someone came into our world from a parallel universe where humanity is healthy, the least of their concerns on that stage would be the lady talking about love and slavery reparations.

If people could really see what’s happening in their nation and their world with fresh eyes, they’d scream in horror. But that’s the exact status quo that all these sane, normal, serious politicians have dedicated their lives to upholding. One where people are deliberately kept poor by a plutocratic class which understands that money is power and power is relative. One where the most powerful military force in history circles the globe and wages endless wars upon disobedient populations. One where we rip apart the flesh of our planet and dump poison into our air and our water in facilitation of a new mass extinction event which will someday claim our own species if not reversed. One where we point weapons at each other that can wipe out cities, cover the earth’s surface in nuclear radiation, and fill the sky with black soot blocking out the sun for decades, and we play with escalations toward the deployment of such weapons like it’s a game.

If all of humanity suddenly took sane pills today, we wouldn’t be mocking some long-shot Democratic candidate for saying things in a slightly different way than we’re used to hearing them. We’d be mocking the people who’ve been propping up this ridiculous, insane way of being, and we’d be throwing them all out on their asses. And we’d be enraged that it took us this long to do so.

Seasoned career politicians are infinitely more ridiculous, crazy, risible and undignified than Marianne Williamson, because the power structures and agendas they uphold are so transparently bat shit insane. That doesn’t mean Williamson is special, it means they are freaks. And if we ever get sane, we’ll immediately see them as such.

Following is CNN's Anderson Cooper's interview with Marianne Williamson after the first night of the CNN Democratic primary debate. . . .

I love her. She has no fear.