“I Learned So Much From the Experience”: Marianne Williamson on Her Presidential Bid

The ninth Democratic presidential debate is taking place tonight in Las Vegas, Nevada. But I just can't stomach even the thought of watching it. It's not that I don't have a preferred candidate, I do! . . . Rather, it's that the sight of billionaire Michael Bloomberg on the debate stage would be too much of a painful reminder, not only of how the Democratic National Committee (DNC) is once again rigging the nomination process for a preferred centrist/moderate candidate, but also of just how corrupt our overall political system is, given that a plutocrat like Bloomberg can so brazenly use his wealth to manipulate public perception and basically buy the presidency of the United States.

And let's not kid ourselves: the DNC's changing of the rules so as to allow Bloomberg into the debates is an attempt to undermine and derail the momentum of front-runner Bernie Sanders, a progressive candidate. 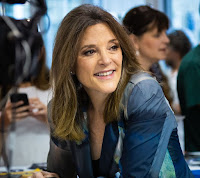 And, yes, it's a form of cheating. Looking back, we can see that this moving of the goal posts also cheated other progressive candidates, like my first preferred candidate, Marianne Williamson (left), who dropped out of the race because she couldn't meet the fundraising threshold established by the DNC; a threshold that has now been abandoned in order to accommodate Bloomberg.

It really is quite sickening – and a profound betrayal of this country's democratic ideals. No one should be able to buy themselves the presidency. And by attempting to do so, Bloomberg and his supporters show that they are actually part of the deeper problem plaguing us – the corruption of our democracy by money. And as Williamson continues to remind us, it's a problem of which Trump is the most horrendous symptom. But make no mistake, Bloomberg's buying of the presidency would also be a terrible and festering symptom of this problem.

So with all of this in mind I've opted to forgo watching this evening's debate. Instead, I thought I'd share the following from Marianne Williamson. It's her thoughtful and heartfelt sharing of what it is she learned from her presidential run. Marianne first shared these thoughts on February 12 on her official Facebook page.

My concern now is for the process of democracy itself. Having spent a full year in the belly of the beast, which in the case of politics is as literal as you can get, I’ve seen the underside of American politics as well as the beauty of what’s possible.

After the second debate, when I was the most googled candidate in 49 states, the word clearly went out from the establishment on high to “Get that woman off the stage!” They knew if I was on the third debate stage I would be an unstoppable force, and they were right. So boy they went to work. Could you look anywhere that there wasn’t a headline about me being “anti-vax, dangerous, crazy, anti-medicine, anti-science, a grifter, bad to gay people, or fat-shaming”? The lies and vilification were extraordinary, many coming from people whose politics are pretty much like mine, and many, I am sorry to say, coming from women. People were duped into thinking I was some wacko crystal lady, whatever that means – or worse. It’s like I was radioactive. When voters actually heard me, I did fine. Great, in fact. But many people had the idea that it was beneath them to even come and hear me. And many just kept saying “She’s unelectable.” When every time you’re mentioned for almost a year the word “long-shot” is written before your name, it has an effect on people.

If I had run a better campaign I would have been able to survive all that. But for many reasons I did not. And I do regret dropping out when I did, because even though I was basically out of money I still would have gotten as many votes in Iowa and New Hampshire as did Tom Steyer or Andrew Yang. I was spooked by everything that was going on, and it made me drop out a minute before the punchline. [New Hampshire] still would’ve been the end of the road for me, I’m sure, but it would’ve been an ending on a much higher note.

I learned so much from the experience; that is an understatement. I said many times: the system was even more corrupt than I feared, but people were even more wonderful than I knew. I continue to feel such gratitude for those who supported me. Thank you, thank you, thank you. I’m sorry I didn’t do better. If I ever do it again, I promise I will slam it like nobody’s business. :)

Following is an interview with Marianne from June of last year. It it she talks about the fundamental problem of the undue influence of money in politics (“the cancer underlying all of our other [societal] cancers”) and the steps that can be taken to address this problem.

NEXT: “It's Time to Take a Stand”:
Marianne Williamson Endorses Bernie Sanders for President