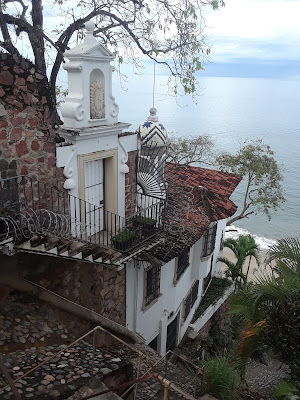 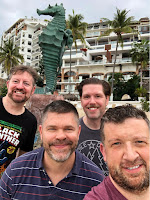 I share this evening a third and final batch of photos from my recent time with friends in the beautiful resort town of Puerto Vallarta on Mexico's Pacific coast.

As I noted in Part I, my friend Brent and I flew down to Mexico early Sunday morning, February 2 and stayed for four days with our mutual friends Pete and Jeffrey, and Pete's parents Gary and Ruth, in a condominium in the Molina Del Agua complex, located in the Old Town of Puerto Vallarta. Throughout the duration of our stay the weather was unseasonable crappy – overcast, rainy and cool. But we definitely made the most of our time in this beautiful place.

Hopefully the photos I share in this series of posts attest to that! 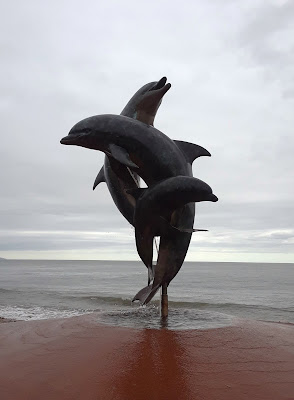 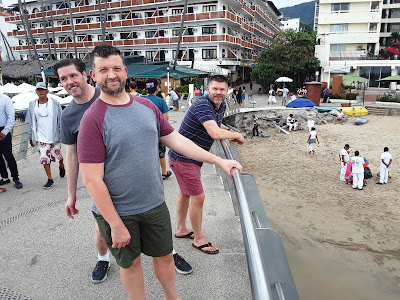 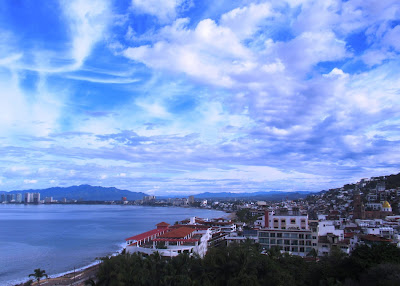 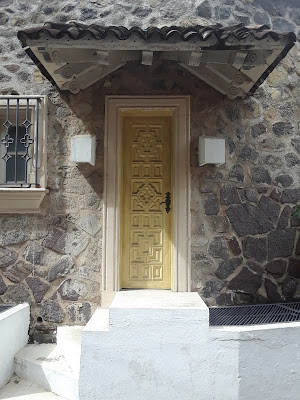 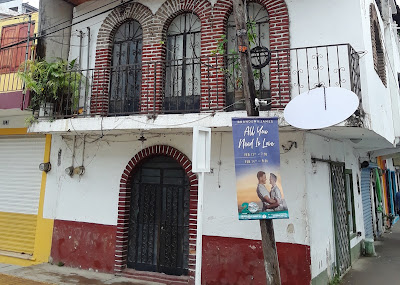 Puerto Vallarta is one of the favorite Mexican tourist destinations of the LGBT community. There are hotels, bars, nightclubs, beaches, and even drinks specifically for LGBT travelers, and due to the safety and welcoming environment for these guests, it is the first city in Mexico to receive the Gay Travel Approved distinction by GayTravel.com. Here we discover how and why Puerto Vallarta became the Gay Capital of Mexico.

In the south of Puerto Vallarta you will find the “Old Town,” also called “The Romantic Zone,” the tourist area favored by expats and foreigners who want to soak up local traditions. The Old Puerto Vallarta is also considered the gay neighborhood since 1980, when the gay community and retired Canadians and Americans bought land and properties in order to create gay-friendly businesses. Today there’s a wide variety of attractions with this focus, including bars, restaurants, stores, nightclubs, and both budget and boutique hotels.

In this zone is nestled the popular beach Playa de los Muertos, which, although not exclusively gay, for the last 20 years has been known as a gay-friendly beach (also called Blue Chairs, because of the many blue chairs placed by a gay resort which bears the same name), mainly in the high season, from November to March.

. . . Unlike certain countries, laws against homosexuality never existed in Mexico. There is, however, a strong macho culture and religious influence which disapproves it—nonetheless the locals show respect. Under these circumstances, the growing community has led LGBT organizations to work to promote a change of culture in the pursuit of equality. Their work has gotten results: they have achieved recognition of gay rights, and implemented laws against the provocation and incitement of hate or violence against LGBTs, and also to guarantee equality in employment and public accomodation and services. Even more, in 2013 Puerto Vallarta legalized civil union between LGBT couples, followed by same-sex marriage in 2016.

This city organized its first Gay Pride March, and has hosted the Pink & Proud Women’s Party—the equivalent lesbian celebration—for the last four years, with assistance from the local Canadian and American communities. The multiple events in support of the LGBT community have marked out Puerto Vallarta as the “Mexican San Francisco.” 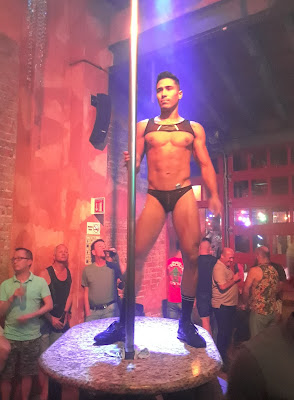 Above and below: A dancer at La Noche Lounge and Rooftop Garden Bar, a popular gay establishment we visited on the evening of February 4, 2020. This dancer's grace, strength and prowess reminds me of something that Bo Franklin wrote in his article, “Are You Man Enough to Pole-Dance?”

I can appreciate why [pole-dancing or simply “pole”] has a greater appeal to gay men. Beyond its focus on style over brute force, pole hasn’t completely shaken its deviant origins. It came from the fringes of society, and for a lot of gay men this feels familiar; we know what it’s like to unite around something others see as taboo. . . . [T]here’s something queer about pole. 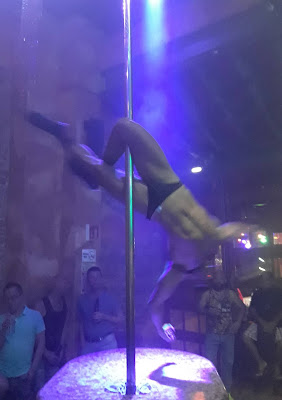 Do you know what came to mind for me as I watched this particular dancer? . . . Bobbie Gentry's song "Belinda," about a burlesque dancer in Corpus Christi!

Following are some of the song's lyrics that I've adapted to accompany my photos of the memorable dancer (and acrobat) I encountered in Puerto Vallarta.

. . . Then one night I wrote a hasty note
And threw it on the stage
Askin' him if he would have a drink with me
And we talked of many things
About the sunshine and the country
And a tear came to his eye quite suddenly

And I listened to him, thought about him
Finally, I asked him
"Tell me, Basilio, what does your life mean?"
He looked me in the eye
And told me "A hundred bucks a night
And to be a damn good dancin' Burlesque queen" 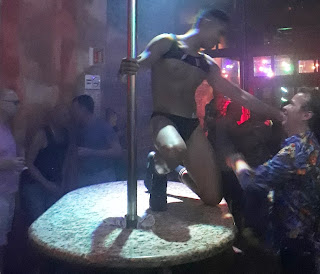 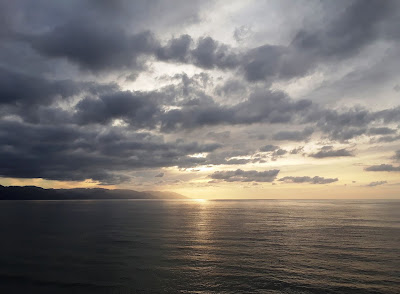 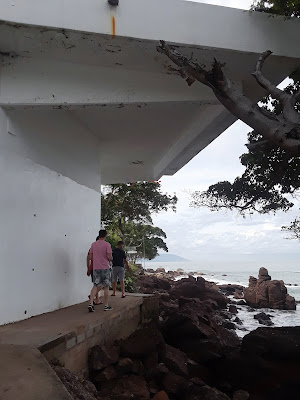 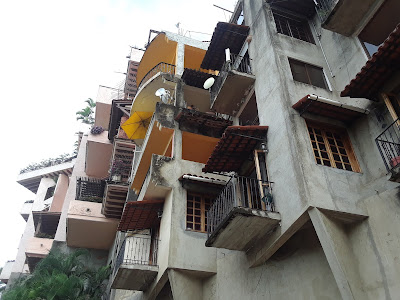 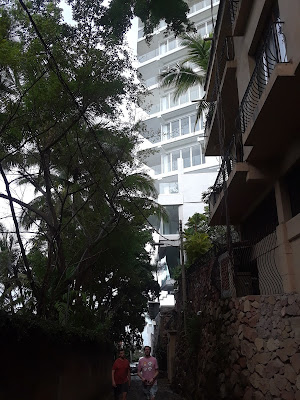 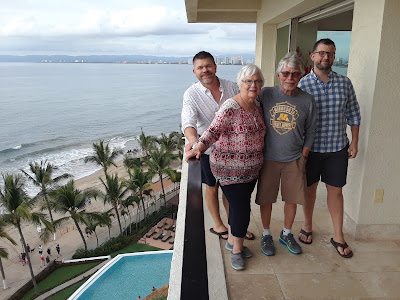 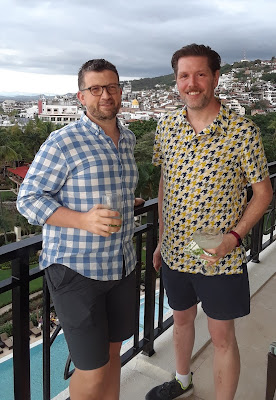 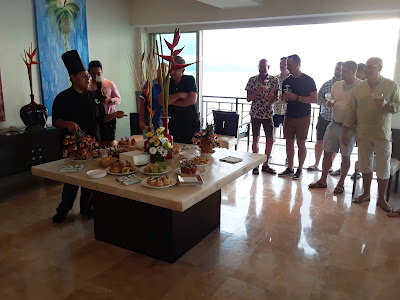 Above: On our last night in Puerto Vallarta (Wednesday, February 5, 2020) we were invited to a soirée hosted by another holiday resident at Molina Del Agua. Our host (and his mother) had the event catered by a local up-and-coming chef and his restaurant staff. 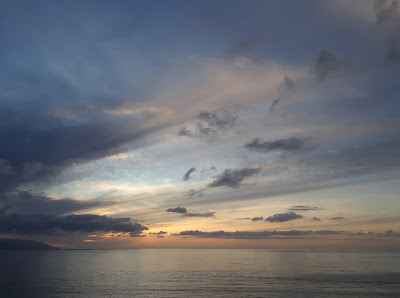 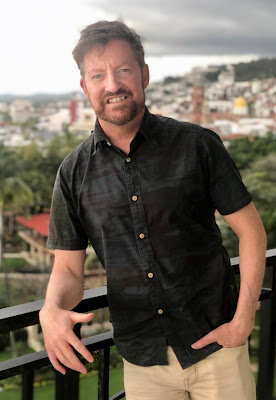 Above: I call this my Puerto Vallarta portrait! (With thanks to my friend Pete.) 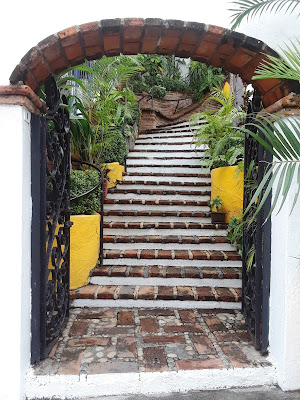 Dear Michael .. Despite the weather, Parts 2 & 3 certainly attest to the fact
you all made the most of your time in such a beautiful place.
Great photos & very informative!