Kuan Yin: “A Mirror of the Queer Experience” 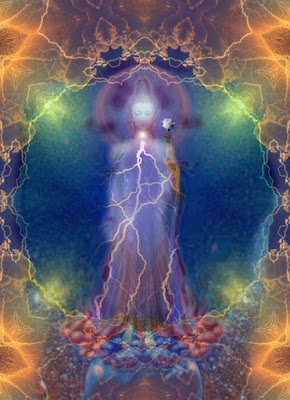 The Wild Reed’s 2021 Queer Appreciation series concludes with an excerpt from Kittredge Cherry’s recent QSpirit piece that explores Kuan Yin, the genderfluid spirit of compassion in Buddhism, as a “queer Buddhist Christ figure.”

Kuan Yin, the genderfluid spirit of compassion in Buddhism, is sometimes thought of as a queer Christ figure or LGBTQ role model. Buddhists celebrate the enlightenment of Kuan Yin every year in July or August. This year the date is July 28, 2021.

Christians honor Christ as savior, and Kuan Yin is a type of Buddhist savior figure called a bodhisattva — an enlightened person who is able to reach nirvana (heaven) but delays doing so out of compassion in order to save others from suffering.

Artists often show Kuan Yin with eyes in the hands and feet. They are like the wounds of Christ, but Kuan Yin can see with them. Kuan Yin is also associated with the mother of Christ. When Christianity was persecuted in Edo-era Japan, the “hidden Christians” created states of Mary disguised as Kuan Yin.

Also known as the goddess of mercy, Kuan Yin goes by different names in different places, including Avalokiteshvara in India, Tara (female) or Chenrezig (male) in Tibet, and Kannon in Japan.

Writers and scholars who have explored the queer side of Kuan Yin include Patrick S. Cheng, an Episcopal priest who teaches at Chicago Theological Seminary; Hsiao-Lan Hu, religious studies professor at the University of Detroit Mercy; and Toby Johnson, a former Catholic monk turned author and comparative religion scholar.

In the introduction to his 2003 essay “Kuan Yin: Mirror of the Queer Asian Christ,” Cheng explains:

Kuan Yin, the Asian goddess of compassion, can serve as a mirror of the queer experience. Specifically, Kuan Yin affirms three aspects in the life of queer people that are often missing from traditional images of the divine: (1) queer compassion; (2) queer sexuality; and (3) gender fluidity. In other words, Kuan Yin can be an important means by which gay, lesbian, bisexual and transgender people can see ourselves as being made in the image of God.

Cheng writes clearly about the connection between Kuan Yin and Christ in the section where he describes his personal search for queer Asian Christ figures:

I have been intrigued by the possibility of Kuan Yin serving as a christological figure for queer Asian people. For me, it has been difficult to envision the Jesus Christ of the gospels and the Western Christian tradition as being both queer and Asian (although I do recognize that queer theologians and Asian theologians have tried to do so in their respective areas). It is my thesis that Kuan Yin might serve as a symbol of salvation and wholeness for queer Asian people of faith.

Click for the whole essay “Kuan Yin: Mirror of the Queer Asian Christ” in English or in Spanish.

Cheng’s latest book Rainbow Theology: Bridging Race, Sexuality, and Spirit was published in 2013. He is also the author of From Sin to Amazing Grace: Discovering the Queer Christ, Radical Love: An Introduction to Queer Theology. His series on “Rethinking Sin and Grace for LGBT People Today” was one of the most popular stories of 2010 at the Jesus in Love Blog.

Hsiao-Lan Hu presented a paper on “Queering Avalokiteśvara” at the 2012 American Academy of Religion annual meeting. She noted that the Lotus Sutra says that Avalokitesvara will appear to teach different beings in different forms, based on what they can accept.

In the summary of her paper, Hu writes, “Of the 33 forms listed in the Lotus Sutra, seven are explicitly female, indicating that the Bodhisattva of Compassion transcends gender identity. . . . What is the theoretical ground in the Buddhadharma (Buddha’s teaching) that justify or even propel such conceptualization? How does that theoretical ground compare to modern-day queer theory?”

She summed up her paper in the 2013 Women’s and Gender Studies Newsletter from the University of Detroit Mercy:

Avalokiteśvara’s multi-morphic manifestation affirms different beings in their specific identities, while his/her transformability points to the possibility of moving beyond the confinement of any particular identity. For people of minority identities, the Bodhisattva thus can be both a source of comfort and a model for coping with reality in which they often need to perform different roles.

Hu is the author of This-Worldly Nibbana: A Buddhist-Feminist Social Ethic for Peacemaking in the Global Community.


“A nice myth for gay people”

Another LGBTQ perspective on Kuan Yin is provided by Toby Johnson in the preface to the revised edition of his book Gay Perspective: Things Our Homosexuality Tells Us about the Nature of God and the Universe. Johnson writes about Kuan Yin as the bodhisattva Avalokiteshvara:

It is said there are Three Wonders of the Bodhisattva. The first is that he is androgynous, simultaneously both male and female, transcending the polarity of gender. That’s why he is such a sweet and lovable fellow: he blends the best of masculinity and the best of femininity.

And the third wonder is that the first two wonders are the same!

That’s why this is such a nice myth for gay people to entertain. It says we’re really all One, all reflections of one another, that the distinction between male and female is illusory and needs to be transcended and that transcending gender is part and parcel with experiencing heaven now.

Avalokiteshvara is portrayed as the androgynous young being, beloved by everybody who knows him. That is very much like the ideal so many gay people find themselves looking for as a lover (and as a sense of themselves). And in the way that we gay people find the world a reflection of ourselves, so this myth says it really is. When we love another man or another woman, seeing their beauty and consciousness as like ours in homosexual attraction, that being we’re loving is the being that is ourself. No duality, no polarization.

A student of Joseph Campbell, Johnson has written 10 books, including the classic Gay Spirituality and Two Spirits. He is former production manager of Lethe Press and former editor of White Crane Journal. Johnson discusses Kuan Yin as an androgynous figure who embodies compassion in his articles “Bodhisattva Avalokiteshvara” and “Avalokiteshvara at the 21st Street Baths.”

Queer theologian Robert Shore-Goss applies the bodhisattva concept to queer Christian life in “Bodhisattva Christianity: A Case of Multiple Religious Belonging” in the 2013 book Queering Christianity: Finding a Place at the Table for LGBTQI Christians. Goss pastored Metropolitan Community Church in the Valley (North Hollywood, CA) after serving as chair of the religious studies department at Webster University in St. Louis. 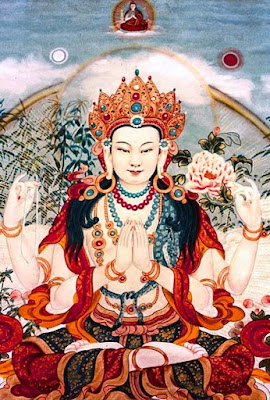 For previous installments in The Wild Reed’s 2021 Queer Appreciation series, see:
• “A Book About Revolutionary People That Feels Revolutionary Itself”
• Remembering Dusty Springfield’s “Daring” 1979 Gay-Affirming Song
• Zaylore Stout on the Meaning of Emancipation in 2021
• Maebe A. Girl: A “Decidedly Progressive Candidate” for Congress
• The Art of Tania Rivilis
• Lil Nas X, the Latest Face of Pop’s Gay Sexual Revolution