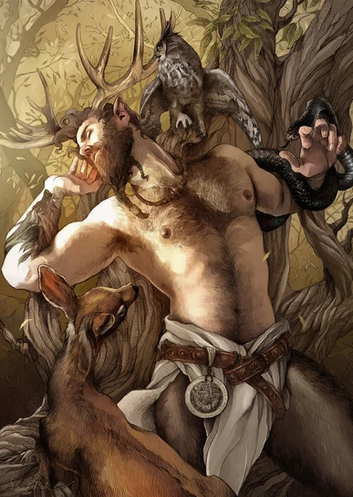 In the latest issue of Witches & Pagans magazine, author and Pagan clergyperson A.C. Fisher Aldag has an insightful article about the ancient archetype (or god) known as Cernunnos [KER-noo-nos].

As I’ve noted previously, I’m drawn to Cernunnos because of what he represents for humanity – and for men in particular. In terms of the latter, what the Antlered One represents stands in stark contrast to the vision of men and masculinity that is generally put forward by the patriarchal Abrahamic religions. Neo-pagan and eco-feminist scholar and author Starhawk sums up this difference succinctly in the following excerpt from her book The Spiral Dance. 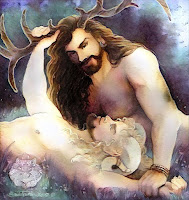 I’ve also previously noted that my interest in the Pagan spiritual path and, in particular, the figures of both Cernunnos and Pan, has introduced me to a much broader and inclusive understanding of the “sacred masculine,” one that welcomes and celebrates queer incarnations of both masculinity and union with the Sacred. And for that I’m very grateful.

Given all of this, you can imagine how happy I was to see such a lengthy article about Cernunnos in Witches & Pagans, one of a number of alternative-type magazines displayed and sold at my local co-op. Following, with added images and links, is an excerpt from this article. 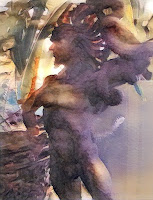 Cernunnos is instantly recognizable to almost any Wiccan or neo-Pagan. The Horned Lord, antlers sprouting from his head, cavorting in the woodlands as the God of the Beasts. A figure of fertility, fatherhood, and fatality. Yet his name is rarely mentioned in historical documents or on artifacts, and actual literature about him is scarce. What we have learned about Cernunnos – or an entity identified as the Lord of the Forest – comes from a plethora of ancient artifacts, works of art, folklore, rirualized dramas and dances, and the speculation of archeologists and cultural anthropologists. Not to mention our own spiritual journeys.

The being we know as Cernunnos has parallel representation worldwide, in every location where cervids (the deer family), antelopes, or wild sheep and goats can be found. There are whole herds of anthropomorphized beings with animal features and human consciousness, mostly male, horned, and hooved. Hunting rituals evoke the image of a frolicking deer-man, a spear-carrying hunter, a guardian of the wilderness. Ceremonial dances, sacred masks, folkplays, and illustrations or statuary give homage to a wild forest deity or spirit on every continent, in a multiplicity of cultures.

• There are deer entities in Asia: the masked dancers of Japan, Nepal, Tibet and Bhutan.

• There are multiple antelop beings portrayed in African cultures from Sierra Leone to Mali.

• Mexico has the deer dance of the Yaqui people, also found in the southwestern USA.

• The Italian island of Sardinia has the Mamuthone, who appear during Carnival.

• Also in Italy are rock carvings or petroglyphs of a deer-man . . . and in France, and in Texas.

• Ancient Rome boasted a mosaic of a horned, bearded man.

• Mainland Europe has Mesolithic cave drawings, as well as Roman-era statuary and frescoes.

• There are over fifty images of the horned entity in what used to be the Roman-Gaulish territories.

• Denmark has the silver Gundestrup Cauldron, with its image of Celtic deities, animals, and a seated figure identified as Cernunnos.

• And the British Isles have plentiful legends, artifacts, coins, dances and folk dramas, all related to the sacred man-beast.

The fact that he has representation worldwide shows that the Horned Lord was a universal concept amongst any society which relied on hunting or agriculture for sustenance.

The mainland European images of the entity we call Cernunnos were likely the inspiration for Dr. Margaret A. Murray’s theory about a horned forest lord, which she wrote about in her book God of the Witches in 1933.

The romantic notion of a Lord of the Forest has been embraced by neo-Pagans ever since Murray published her books. The founder of Wicca, author Gerald Gardner, caused Cernunnos to gain a new recognition amongst modern magick-users of the Western Esoteric Traditions, as well as those who rediscovered the old-line folk practices of the British Isles. Since Gardner originally called the entity “Kernunno” (according to his priestess and author, Doreen Valiente), this leads me to believe that Gardner had heard the name and spelled it phonetically, and did not actually read material about the Roman inscription until later, and then adjusted it in his writings. Gardner wrote that Cernunnos was worshipped by the common people as a god of the hunt, who was an aspect of a “higher power” that they really could not understand. Gardner and Valiente viewed Cernunnos as “our Lord, the Horned One” equated with the “dread lord of the shadows” ruling the underworld. However, the God of the Woodlands had been lurking around Britain and France for a long time prior to the establishment of the Wiccan religion. 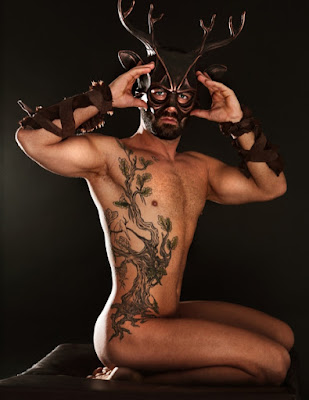 See also the previous Wild Reed posts:
• Beloved and Antlered
• Integrating Cernunnos, “Archetype of Sensuality and the Instinctual World”
• Cernunnos in Autumn Light
• The Devil We (Think) We Know
• A Day to Celebrate the Survival of the Old Ways
• The Piper at the Gates of Dawn
• Biophilia, the God Pan, and a Baboon Named Scott
• Pan’s Labyrinth: Critiquing the Cult of Unquestioning Obedience
• Pagan Thoughs at Hallowtide
• The God from the House of Bread: A Bridge Between Christianity and Paganism
• The Pagan Roots of All Saints Day
• Celebrating the Coming of the Sun and the Son
• Advent: A “ChristoPagan” Perspective
• I Caught a Glimpse of a God
• The Prayer Tree

And at The Wild Reed’s brother site, The Leveret, see:
• The Divine Masculine Principle
• In the Image of the Horned God
• I Call to Cernunnos . . .