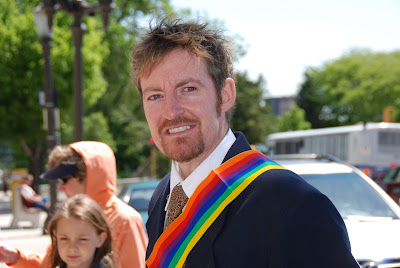 A 2005 change in St. Paul/Minneapolis Archdiocesan policy has meant that a number of GLBT people and others have been denied participation in the Eucharist – the ritual meal in which the Catholic community expresses its identity with Jesus’ life, death, and rising.

The reason for this denial? The individuals in question (myself included) approached the altar wearing a rainbow sash – a symbol that simply proclaims that its wearer is (or knows and affirms) a GLBT person who embraces and celebrates their sexuality as a sacred gift.

I wrote the following commentary after I attended the 2005 Pentecost Sunday mass at the Cathedral of St. Paul. An edited version of which was published in the May 18 edition of Pulse of the Twin Cities.

By Michael J. Bayly
My experience as part of the Rainbow Sash action at the Cathedral of St. Paul on Pentecost Sunday 2005 was actually quite a positive one. I felt totally in communion with those around me and with God – even though the priest presiding at the mass, the Rev. Michael Skluzacek, denied bread and wine to all who were wearing the sash – myself included.

My friend Eduard and I arrived a half-hour before mass started. We joined the other Rainbow Sashers at the cathedral’s side entrance and donned our sashes in the late morning sunshine. To the sound of voices singing “We Shall Overcome,” Eduard and I entered the cathedral and sat toward the front with my friend Kathleen. All around us were people in Rainbow Sashes – well over 100. It was the largest Rainbow Sash event ever, according to Brian McNeill, the coordinator of the Rainbow Sash Alliance and president of Dignity/Twin Cities.

The mass began and I found myself amazed at how the readings and hymns supported both why we had gathered at the cathedral on this day celebrating the empowering presence of the Holy Spirit, and why we were wearing the Rainbow Sash – the symbol of celebration of our God-given sexuality. One hymn had the following words: “Joined together as one body, knit together, we are one. We the church, God’s chosen body . . . joined together by the Spirit, every person brings a gift. Every life is full of merit . . . Joined together, all-embracing, yet our separate selves we bring; on our hearts our God is tracing words of love that make us sing.”

When communion time came, Fr. Skluzacek reiterated the archbishop’s request that those wearing the Rainbow Sash remove them before receiving communion “as a sign of reverence for the Lord and a desire for unity.” I found myself wondering how wearing a multi-colored sash could possibly threaten either ‘the Lord’ or Christian unity. The denying of communion as a way of protesting and punishing those you disagree with seemed much more disrespectful and divisive.

Fr. Skluzacek continued his pre-communion warning – noting that if anyone did attempt to receive communion wearing the sash, they would not be allowed to participate in the Eucharistic meal, but instead receive simply a blessing. No one around me made a move to remove their sash.

When it was my turn to approach Fr. Skluzacek, I did so and received his blessing. I then looked him in the eyes and said, “I realize the situation you’re in, and I forgive you.” I wanted to give him the benefit of the doubt. Perhaps he was simply following orders. Perhaps if it was up to him, he would give communion to all of us. Perhaps he lacked the courage to follow his conscience and defy such orders.

Interestingly, I think everyone wearing the sash made some comment to the Eucharistic minister they approached to receive communion. My friend Mary, for instance, took the hand raised in blessing of one minister and said, “Shame on you!”

Later she told me how appalled she was that they would consider their blessing a substitute for what they were denying. “It was so incredibly pompous!” she said.

In retrospect, it was quite amazing: Over a hundred people speaking from that holiest of places, their conscience, and making their feelings and beliefs known to the hierarchy at the most sacred time of the mass.

How appropriate for Pentecost! And how unprecedented! Have the members of the church hierarchy ever before experienced such a loving yet firm challenge?

Who could have foretold that the banning of communion to Rainbow Sash wearers would initiate such an outpouring of the Spirit!

Such confounding paradox, the Bible contends, is often a sign of the presence and action of God.

Such thoughts, however, were to come to me later. For the moment, I found myself returning to my seat having been denied communion – at least by a priest. For as it turned out, I was to receive communion that morning.

Back in our pew, Eduard gently touched my arm. Turning, I saw that he was reverently holding half a host in his hand. He broke it and gave a portion of it to me. I in turn broke my piece and gave half to my friend Kathleen.

Later I discovered that someone without a sash had shared the host they had received with Eduard – who was wearing a sash. What this person (and apparently other non-sash wearers) did seems to me to be what communion is all about. I found this loving and sharing action very inspiring and hopeful. It would be something Jesus would do – and did do through the actions of these people.

Here were “ordinary Catholics” taking to heart Christ’s call to be a “priestly people.” I later heard that other non-sash wearers refused to receive communion as a way of standing in loving solidarity with those who were wearing the Rainbow Sash.

At the end of the mass a group of Rainbow Sash wearers left their pews and tagged onto the end of the recessional as it made its way to the back of the church. Usually this recessional is comprised of ordained ministers and other “official” folks. It brought a smile to my face to see GLBT people, their parents, and loved ones – all adorned in the Rainbow Sash – taking the initiative and proclaiming their own unique authority and leadership.

As my friends and I were leaving the cathedral, various people – ushers and parishioners – thanked us and offered words of encouragement. This too felt nurturing and empowering.

In short, I felt renewed and re-energized as a result of my participation in the 2005 Pentecost Sunday mass at the cathedral. I’ve come to realize that my Rainbow Sash experience was in fact a Eucharistic experience, as I and others experienced God’s loving transformation and empowerment mediated through those gathered in both solidarity and support of what the Rainbow Sash represents.

Together we are the Risen Body of Christ, alive with the Spirit of awareness and compassion, and compelled by the good news of the Gospels to joyfully and courageously speak of our experience of God in our lives and relationships.


See also the related Wild Reed posts:
• Reflections on the Primacy of Conscience
• The Question of an "Informed" Catholic Conscience
• "Receive What You Are, the Body of Christ"
• Celebrating Our Sancifying Truth
• Who Gets to Be Called Catholic - and Why?
• Comprehending the "Fullness of Truth"