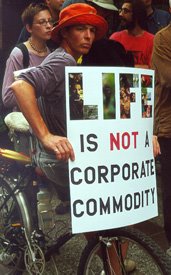 Recently I shared an editorial from the Minneapolis Star Tribune which examined the growing economic disparity in the U.S. It reminds me of an interesting article that Jeremy Rifkin wrote for The Guardian in June of 2005.

In this article, Rifkin argues that in terms of a global economic system that’s fair, “the difficult task at hand is pursuing and maintaining a balanced tension between the entrepreneurial spirit of capitalism and the social solidarity of socialism without either vision vanquishing the spirit of the other.”


“We are, after all”, he notes, “each and every one of us, an embodiment of both spirits. We desire to pursue our own self-interests while mindful of our responsibilities to our fellow human beings.”

The full text of Rifkin's article is below. Enjoy.


The European Union's crisis has obscured the fact that it has come closest to balancing market dynamism and social protection, writes Jeremy Rifkin.

Europe has plunged into a crisis of meaning in the wake of the repudiation of the EU constitution by voters in France and the Netherlands – and the Brussels summit breakdown. At the root of the crisis is a deep angst over the dire state of domestic and European economic affairs.

The neo-conservatives argue that the only way out of the economic malaise facing Europe is to deconstruct decades of social benefits that have come to define the European notion of quality of life in a socially responsible society, and unfetter the marketplace so that competition can run free. If Europe does this, they say, the economy will grow and the people will prosper.

The socialists argue, on the other hand, that the unrestrained Anglo-American liberal market model rewards the rich by beggaring the working class and results in a meaner and more bereft social order.

In a curious way, what is really on trial is not the EU constitution but the future of capitalism itself. An increasing number of Europeans are asking themselves whether the liberal market model or the social market model is the best approach to charting the economic future.

Today, while corporate profits are soaring around the world, 89 countries find themselves worse off economically than they were in the early 1990s. Capitalism promised that globalization would narrow the gap between rich and poor. Instead the divide has widened. The 356 richest families on the planet enjoy a combined wealth that now exceeds the annual income of 40% of the human race. Two-thirds of the world's population have never made a phone call and one-third have no access to electricity.

The champions of capitalism pledged to promote sustainable economic development; yet we continue to squander our remaining fossil-fuel reserves, spewing increasing amounts of carbon dioxide into the atmosphere, destroying the world's ecosystems and habitats, with the prospect of catastrophic climate change.

Our business leaders decried the corruption that permeated the old centralized communist regimes, while many engaged in equally egregious corporate corruption, bringing down some of the world's “most trusted” companies.

Why have the two dominant ideologies of the industrial age so utterly failed? Because the central tenet of each was not sufficiently tempered by the antidote of the other. The central tenet of communism is best expressed in the oft-heard aphorism “from each according to his ability, to each according to his need”. In practice, however, communism created a form of paternalistic governance that robbed the individual of any semblance of autonomy. In the end, everyone was subject to the dictates of impersonal state-run bureaucracies.

The central tenet of capitalism is found in the words of the Scottish Enlightenment economist Adam Smith. He believed that an invisible hand ruled over the market place, guaranteeing that everyone would eventually benefit, if only the market mechanism were left unencumbered. Neo-conservative economists and politicians still believe this.

In reality, the invisible hand has turned out to be nonexistent. Left to its own internal logic, the unfettered market leads not to a bigger share of the economic pie for all but a “winner takes all” endgame.

Is capitalism salvageable? Yes, but only if we are willing to have a frank discussion. The strength of capitalism is, paradoxically, also its weakness. The market caters to the pursuit of individual self-interest, and is therefore almost pathologically innovative. The entrepreneurial spirit, technological innovation and productivity advances exceed any other economic system ever devised.

But capitalism does not fairly distribute the fruits of economic progress. That's because the logic in the boardroom is always to cut production costs in order to maximize profits and shareholder value. This means reducing, whenever possible, the share of the gains that goes to workers, as well as cutting the expense of preserving the natural environment upon which all future economic activity depends.

In a globally connected world, the hope for humanity rests on creating a balance that encourages and stimulates the entrepreneurial spirit of the market while tempering its inherent propensity to run wild and concentrate more and more power at the top. Countervailing forces, in the form of a strong trade-union movement, a diverse and healthy civil society and vigilant political parties, need to rein in the potential abuses and exploitation of capitalist practices by ensuring a just redistribution of the benefits of the market with the appropriate social programs – without, however, stifling market incentives. This is a tricky balancing act.

We ought to consider capitalism and socialism as complementary “visible hands” that continually balance individual self-interest in the market with a collective sense of responsibility for each other's welfare.

The social market-economy model practiced across the member states of the European Union comes closest to this mechanism. Unfortunately, the current economic debate in Europe threatens to polarize public opinion – pitting unrestrained market forces against the bureaucratic dictates of a welfare state.

The difficult task at hand is pursuing an intelligent and sophisticated course that maintains a balanced tension between the entrepreneurial spirit of capitalism and the social solidarity of socialism without either vision vanquishing the spirit of the other. We are, after all, each and every one of us, an embodiment of both spirits. We desire to pursue our own self-interests while mindful of our responsibilities to our fellow human beings. A reformed European social economy that allows both aspects of human behavior to flourish is a model for the rest of the world to follow.

Jeremy Rifkin is the author of The European Dream: How Europe's Vision of the Future is Quietly Eclipsing the American Dream.