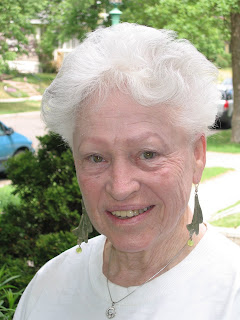 A number of my friends in the justice and peace movement back in Minnesota have been mentioned in a recent piece by Star Tribune columnist Nick Coleman.

Coleman’s September 19 column focused on Brigid McDonald, a Sister of St. Joseph of Carondelet (CSJ), an active member of Women Against Military Madness, and a dear friend of mine.

Brigid also serves with me on the board of

CPCSM. While I’ve been in Australia awaiting the completion of my Green Card application process, Brigid has been taking care of the beautiful plant I received in May when I began the process of becoming a CSJ consociate.

Along with her three biological sisters, Rita, Kate, and Jane, who are also Sisters of St Joseph of Carondelet, Brigid is the subject of a documentary film entitled Four Sisters for Peace (“rated ‘R’ for rebellious”!). 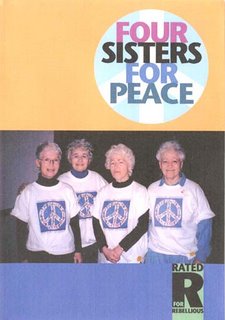 A Fragile Witness for Peace Fasts, Defying the Rain
By Nick Coleman

Sister Brigid McDonald dropped her heavy Irish sweater somewhere on the way to the Lake Street Bridge, where she was standing on the St. Paul side of the Mississippi River Tuesday, in a cold wind and a spitting rain.

I was worried about her.

Sister Brigid was without a sweater, she had been fasting since Sunday and she will be 74 next week. On these frail shoulders lay whatever slim hopes we still harbor for peace.

“They prepare for war when it's cold, so we have to prepare for peace come hell or high water,” Sister Brigid said. “We’ve had both.” She laughed, which is a good sign in a frozen septuagenarian who is not eating.

McDonald is one of about 30 dedicated peace workers who have fasted since Sunday and have stood vigil – in unseasonable cold – on the heights above the Mississippi River to witness for peace. It is a small thing, this witness in a world at war and in a country whose leaders seem hellbent on trying to salvage the bloody lies of Iraq by doubling the wager and gambling yet more blood on Iran.

Twenty-seven hundred dead Americans, many more dead Iraqis. A public opposed to the war (half think it was a mistake; 60 percent say it's being mishandled) but cowed into silence while the government recklessly “redefines” torture so that it can be done with impunity, in our names.

A lonely few speak out.

There was a small huddle of dissenters on the east end of the bridge yesterday, waving signs saying Stop The Killing. A surprising number of passing drivers honked in support. A few glared. An occasional twerp shouted, “Get a job!” which was funny in a stupid way, because these peace workers have labored hard all their lives and are dedicated now to trying to leave a better world than the one they found. 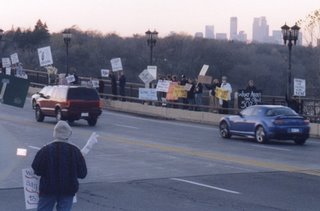 “This may be a ‘fast,’ but it's not that fast,” said Ward Brennan of Minneapolis, one of those hungering for peace who admitted he was looking forward to a potluck supper tonight to end the fast.

“The temptations are grave,” Sister Brigid added. “This morning I passed up some beautiful cookies.”

“But we have hope,” said Marie Braun of Minneapolis, another of the hungering. “The Berlin Wall fell, Nelson Mandela was released. We’ve seen things that were unexpected. The unexpected can come again.”

Besides, said Barb Palmer, there have been eagles.

The peace vigil, normally held each Wednesday at 5 p.m., has gone all day this week, 9 to 5. The expanded hours have brought signs of approval from on high: beautiful eagles that have soared above the bridge, conveying symbolic approval on the peace workers below from the mighty symbol of a mighty troubled country.

Yesterday, at the United Nations, President Bush accused Iran of squandering its wealth on weapons. The pot calling the kettle black. The U.S. has spent $320 billion in Iraq, $7 billion of that from Minnesota – more than $1,000 for every man, woman and child of us, plus all the squandered and wounded lives.

But no need to bother ourselves about that little war in Iraq or those little ladies standing in the cold and the wind on the bridge. Keep moving. Nothing happening here.

By the way, Thursday is the International Day of Peace, established by the United Nations in 1981 to bolster peace with vigils, prayers and moments of silence (a minute at noon) in a world where 1,000 people – many of them children – are killed each day.

The Irish poet Yeats said, “peace comes dropping slow.” Right now, that seems overly optimistic. But until Sister Brigid and her friends give up the fight, hope is alive. 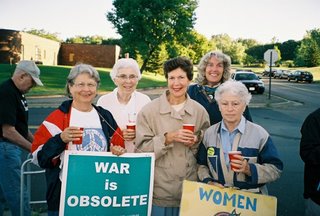 Above: My parents met Brigid, and other friends of mine, when they visited Minnesota in July 2005. From left: Marilyn Schmidt; Betty McKenzie, CSJ; my mum, Margaret Bayly; Pepperwolf; and Brigid McDonald, CSJ. 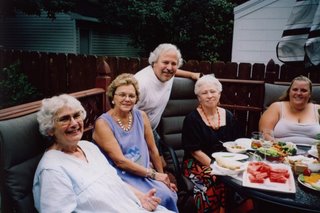 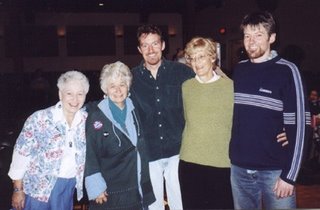 Above: In October 2004, while on a business trip to the US, my older brother, Chris, visited me in the Twin Cities. During his visit we went and heard award-winning independent journalist Amy Goodman speak at St. Joan of Arc Church. Standing from left: Brigid McDonald, CSJ; Jane McDonald, CSJ; me; Marie Braun; and Chris.