Separate is Not Equal 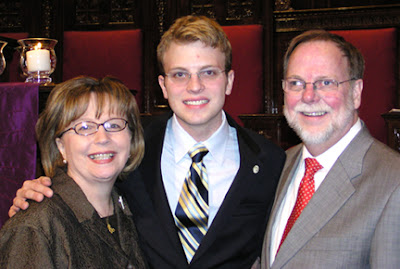 Jacob Reitan pictured with his parents, Randi and Phil.

In his commentary, Jacob responds to the idea that gay people should be granted “civil unions,” rather than “marriage.” According to some, such a compromise would be a “separate but equal” arrangement. Yet as Jacob notes, “separate is and always has been inherently unequal.”

Break Down the Barriers, and Allow Us All the Dreams We Deserve
By Jacob Reitan
Star Tribune
December 7, 2007

Over this past year I have stood by the side of each of my three siblings as they married the ones they love. The locations for their nuptials were scenic and special: my eldest brother, Ben, on the sands of a beach in San Diego; my other brother Josh, in the quaint backyard of the St. Paul College Club, and my sister, Britta, on the beautiful Mississippi River at the Nicollet Island Pavilion.

I look forward to the day when I too will find the love of my life. And while I long for that day, I know it will come with struggle.

When I attempt to have my marriage recognized by the government, it will be denied. What came so easily for my straight siblings, legal marriage by a sweep of a pen, will likely only come for me, a gay man, after a difficult and protracted struggle. This struggle will most certainly come with heavy prices for the gay and lesbian community.

This final price is perhaps the greatest of all, because it affects us all, both gay and straight. When our government fails to live up to its founding promise of equality under the law, we all have a hand in that injustice. We all, through mere association with inequality, are linked to it.

In the face of this injustice, some propose a compromise (“Civil Unions Offer Solution to a Vexing Question,” Mary Catherine Preus, Nov. 18). They say: Let us all agree to allow straight couples to have civil marriage, and for gay and lesbian couples, let us create a separate institution called civil unions. To me this argument has never made sense. Separate is and always has been inherently unequal. This axiom has been tested and proven time and again both in American history and in the history of the world.

The answer to the injustice of inequality must never be to separate out the oppressed. Rather, the answer can only be to break down the barriers that separate the oppressed from the rest of society. The act of breaking down these barriers should be an easy step for us to take – easy because we should understand that what we dream for ourselves, we should also dream for our neighbors.

To those who are married, you must ask yourself: Would you be willing to trade in your marriage license for a civil-union license? If not, then you should not ask a gay or lesbian couple to make this sacrifice. We hope for the same things you hope for – to find love and to have that love recognized with equal blessing in name and privilege.

All of us must come to see this common hope as a force that bonds us and makes the fight for marriage equality just as much yours as it is mine. We must come to realize that gay or straight, when you or I fight for marriage equality, we affirm not just the founding promises of our country, but we affirm also ourselves and our capacities to love. When we come to this realization, it is only natural that we will also come to embrace a state of mind that yearns for reform – a state of mind that prioritizes courage over timidity, unity over division, love over intolerance.

As I look into the future, I do not know when my right to get married will be recognized by the state. But I do know one day I will be married, and on that special day I will be surrounded by family and friends. My siblings will be by my side, and my parents will be in the front row.

I know as well that if you join me in the fight for marriage equality, in a symbolic sense, you will be there, too.

Jacob Reitan is a graduate student at Harvard Divinity School in Cambridge, Mass.


For more of Jacob on The Wild Reed, visit:
A Must-See Film
Equality Riders Experience the “Great Dissonance at the Intersection of Catholic Beliefs”
CPCSM’s Year in Review (2006)

Thank you, Jacob. You are a wonderful and articulate voice of justice for gay men and women. While the right for my partner and I to marry will probably never happen in my lifetime, I pray, hope, and will work for it to happen in yours.