In my last post I shared the National Catholic Reporter’s coverage of the December 2 Vigil for Solidarity with LGBT Catholics that I and others helped organize.

Two local publications have recently reported on the vigil – City Pages and Lavender. Personally, I find the former’s coverage too flippant for my liking. And the caricature of Archbishop Nienstedt isn’t helpful. Then again, perhaps City Pages is simply reflecting the perspective of the general populace, the majority of which simply can’t take seriously the Catholic Church’s stance on homosexuality, and consider many of its authority figures closeted hypocrites.

The “open letter” that City Pages refers to was actually penned by the editorial team of The Progressive Catholic Voice, not just by me.

Anyway, following is City Pages’ coverage of the vigil. I’ll post Lavender’s report once it’s published next week. Despite the fact that Lavender considers itself “Minnesota’s GLBT magazine,” I doubt if it’s coverage will be much better. After all, it’s primary function seems to be to serve as a shopping catalogue for a certain type of gay man. I hope I’m proved wrong. 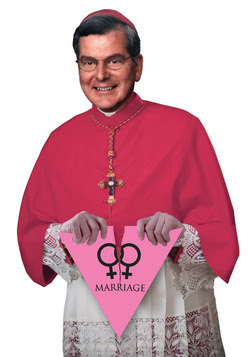 Queer eyes are on the papal guy
More than 300 Catholics died on the snowy steps of the Cathedral of St. Paul last week.

The “die-in” was part of an organized protest of the new Archbishop in town: John Nienstedt. Last month the Archbishop declared his position on homosexuality in an article published in The Catholic Spirit. Here’s the abridged version: “grave evil.”

Responding to Nienstedt’s article in an open letter, Michael Bayly, editor of The Progressive Catholic Voice, wrote: “By the threat of sin, you have divided parents from children, family members and members of loving communities from each other.” Then, a question: “Is it a mortal sin if we support homosexual family members and friends?” And: “May we have them to dinner?”

The archbishop’s response was stoically indirect: “The teaching of the Catholic Church about God’s plan for human sexuality is the same today as it has been for centuries. It is not discriminatory.”

The corpses in front of the Cathedral, no doubt, rolled over in their graves.

I praise a world that has protestors in it.

By the threat of sin, you have divided parents from children, family members and members of loving communities from each other. Many of us are not affected by your words because we firmly believe that homosexual love is, as all love is, of God. But upon others who are still struggling with Roman Catholic Church teaching on this subject, you have placed an intolerable burden.

Here are the loving words of Jesus:
"Now great multitudes accompanied [Jesus]; and he turned and said to them, 'If any one comes to me and does not hate his own father and mother and wife and children and brothers and sisters, yes, and even his own life, he cannot be my disciple. Whoever does not bear his own cross and come after me, cannot be my disciple.'" Luke 14:25-27

Michael, I agree with your assessment that City Pages coverage is probably a reflection of the general population, or at least the younger, educated, professionals who simply do not take the Catholic Church's stance seriously. And while Lavender Magazine may not always be hard hitting journalism, at least both have brought the event forward to their readers. Small successes are nonetheless successes. Maybe my threshold of success is set a bit low, however I agree that we would have hoped for more. Keep up your good work.

Brad, thanks for your comment. Maybe I am being too hard on both City Pages and Lavender.

Dan, apart from the necessary cross involved with denying the demands of one's ego, LGBT Catholics also bear the "intolerable burden" of the Church's homophobia. Such a burden is truly tragic as sexuality - gay or straight - should be recognized, embraced and lived as a blessing, not as a cross.

Also, when LGBT people accept themselves and seek to live authentically, it often causes divisions within families. Yet as you say, Jesus demands that we live lives of integrity and honesty, lives that are aligned with his spirit of liberation and truth. He clearly knew that the authentic life often makes others uncomfortable, even hostile. He, of course, paid the ultimate price for living such a life - and for encouraging others to do likewise.