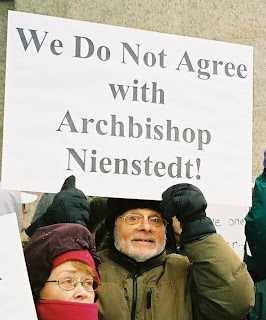 I hope Coadjutor Archbishop John Nienstedt continues to write letters to the editor of the Minneapolis Star Tribune. Why? Because, to date, they’ve ensured responses from others that are quite remarkable in their clarity, compassion, and intellectual honesty – qualities that ensure a moral credibility sadly lacking in the Roman Catholic Church’s official teachings on homosexuality. It is Archbishop Nienstedt’s aggressive promotion and defending of such teachings that have prompted literally hundreds to let him (and the wider church and society) know that they respectfully disagree.

In a Dec. 22 letter (“Love, not acceptance”), the Rev. John C. Nienstedt says we are all called to radical honesty and moral integrity. He also says we ought to be able to have dinner with sinners without implying that we condone the sin.

I can agree on both points, so I say this to him: Your stated views against homosexual behavior are morally repugnant, seemingly rooted in ignorance and misguided faith. If there is indeed sin, your denigration of good people and their loving behavior is just that. But I do not think that having lunch with you and telling you this to your face would sully me. Do you have the courage to discuss this over a sandwich? My treat.

Once upon a time I could have written Archbishop John C. Nienstedt’s letter. But, over the years, gay and lesbian Christians and books, such as Homoeroticism in the Biblical World by Martti Nissinen and A Time to Embrace by William Stacy Johnson, have taught me to see things differently.

I now see that the biblical texts that rightly condemn lustful, exploitative same-sex behavior say nothing concerning homosexuality, as correctly understood today, nor concerning committed same-sex relationships of love and faithfulness. To use such texts to condemn such persons and such relationships is like using a book about heterosexual rape and abuse to condemn heterosexual marriage!

If the Apostle Paul were here today I believe that he would instruct us to understand those condemning texts, including his own, in their historical context and to see this, and all, ethical issues in light of the timeless wisdom of this paragraph from his letter to the church in Rome:

“Owe no one anything, except to love one another; for the one who loves another has fulfilled the law. The commandments, You shall not commit adultery; You shall not murder; You shall not steal; You shall not covet; and any other commandment, are summed up in this word, ‘Love your neighbor as yourself.’ Love does no wrong to a neighbor; therefore, love is the fulfilling of the law” (Romans 13:8-10).

The Catholic leadership is out of step with the times, and their membership.

The Church is very slow to change and, sadly, this shouldn't surprise us. It's still critical to work toward that end, however. I'm fortunate to be a member of a progressive Baptist church that welcomes and affirms gay people. Every now and then we get some flack, but we've aligned ourselves with the more progressive American Baptist Churches. Unfortunately, our state organization isn't so welcoming and we expect to be "asked to leave" at some point.