Lanae Erickson on Taking a Lesson from Down Under 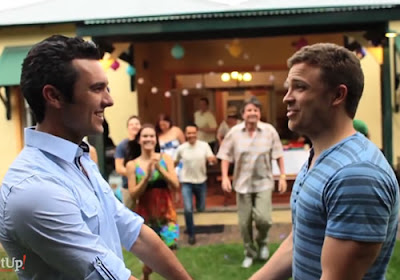 Lanae Erickson, deputy director of social policy and politics at the moderate think tank Third Way, has an insightful op-ed in the December 5 online issue of The Advocate. The focus of this op-ed is the hugely successful Australian marriage equality ad that I shared and discussed yesterday.

Erickson argues that the Australian ad has succeeded in winning hearts and minds because it portrays three key attributes that regular folks, i.e., those in "the middle," believe are crucial to marriage: intention, adversity, and community. Related to this is the compelling and effective way the ad "shows — not tells — that gay couples are much more similar to straight couples than they are different."

Drawing on Third Way’s extensive research on how Middle Americans view the issue of marriage for gay couples, Erickson articulates three reasons why an ad similar to the Australian one might be "effective on American airwaves at changing minds in the middle."

Following is Erickson's op-ed in its entirety.

Taking a Lesson from Down Under 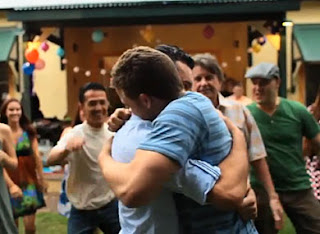 That’s the tagline for the new marriage ad circulating like wildfire across multiple continents. Created by the progressive Australian group Get Up! as that country debates allowing gay couples to marry, the two-minute video tells the story of a relationship through the eyes of one of the participants. It depicts the initial meeting and romance, the arguments and everyday annoyances, the joyful times and the depths of grief, all culminating in a man getting down on one knee and proposing in front of the couple’s friends and family. The person behind the camera is finally revealed, and the viewer sees that it is another man, just as the two are being enveloped in congratulatory hugs on their engagement.

So why has this ad captured the hearts and Facebook statuses of so many marriage advocates and allies in the U.S., and could it be part of a strategy to move marriage forward in our own country? Third Way’s extensive research on how Middle Americans view the issue of marriage for gay couples — and how to move them to solidly support it — points to three reasons that a similar ad may be effective with the middle stateside.

First, the video could help correct a misperception about the intention of gay couples who wish to marry. In our research, people in the middle overwhelmingly thought that couples like themselves married in order to make a public promise of love and commitment. But when it came to gay couples, the middle believed they were motivated by “rights and benefits, like tax advantages, hospital visitation, or sharing a spouse’s pension.”

Sound familiar? That’s because those rights have been at the crux of marriage advocates’ equality arguments for decades. But this focus on rights exacerbated the existing intention disconnect by reinforcing the idea that gay couples want to marry for some other set of reasons than most couples. This gap is a huge problem, given that those who think gay couples want to marry to get rights and benefits are overwhelmingly opposed to allowing them to do so. On the other hand, those who believe gay couples want to make a lifetime commitment are far more likely to be in our corner. That’s why Third Way has launched a Commitment Campaign to urge advocates to make a major shift and start talking about marriage in terms of lifetime commitment in order to move the middle.

So in contrast to many of the ads run around Proposition 8 and other recent marriage ballot initiatives in the U.S., the Australian ad doesn’t say a word about rights. And no one could believe the proposal at the end was motivated by tax advantages or pension benefits. It was about love and commitment — just like any other couple’s.

Secondly, the ad poignantly depicted the more important side of the vows for the middle: the “for worse.” When asked what marriage means to them, Americans in the middle focus on lifetime commitment through thick and thin — mostly the thin part. The difference between marriage and other relationships in their minds is that you have to stick around through the difficulties, the sorrows, the obligations, and the responsibilities. Marriage is a promise to care for another person even when you don’t feel like it — to support your partner when it’s not convenient, romantic, exciting, or fun. It’s a pledge of fidelity in sickness and in health, but it’s really about the sickness.

That’s why the ad’s scenes showing the challenges of the relationship really matter. Watching the couple argue and talk it out, navigate meeting the in-laws, and support one another at a parent’s deathbed demonstrates the very essence of marriage for the middle. It shows that gay couples are capable of putting convenience and self-interest aside and that they intend to do so. In a way, it shows not only that this couple really gets what marriage is about — they’ve earned it.

Finally, by showing the couple surrounded by their family and friends, and having that group witness and support their engagement, the video imparts another crucial piece of marriage for the middle: community. Americans in the middle don’t believe marriage is simply a contract between two people —rather, it’s about making a promise in front of the people closest to you and asking those people to hold you accountable to those vows. In essence, that’s the difference between a civil union and a marriage. A civil union is a legal contract that bestows rights and benefits. But a marriage is about something much weightier: standing up in front of family and friends and pledging to be faithful to another person for life, and asking that those who witness your vows support you in keeping that promise.

The Australian ad works because it portrays these three attributes that the middle thinks are crucial to marriage: intention, adversity, and community. It works because it shows — not tells — that gay couples are much more similar to straight couples than they are different. And ultimately, that’s the key to winning the hearts and minds of the middle.


Lanae Erickson is the deputy director of social policy and politics at Third Way, a moderate think tank in Washington, D.C. For more information on the Commitment Campaign and Third Way’s research, visit www.third way.org.