"An Icon For Our Century" 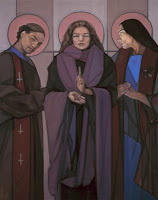 The reflection I share this evening is written by Joan Chittister, OSB, and marks the occasion of today's feast of St. Mary Magdalene. This beautiful and powerful reflection was shared this morning at Spirit of St. Stephen's Catholic Community, and can be found online on the website of the Australian Catholic Bishops' Conference's National Office for the Participation of Women.

An Icon For Our Century - Mary Magdalene
By Joan Chittister, OSB
It is Mary Magdalene, the evangelist John details, to whom Jesus first appears after the resurrection. It is Mary Magdalene who is instructed to proclaim the Easter message to the others. It is Mary Magdalene whom Jesus commissions to “tell Peter and the others that I have gone before them into Galilee.”
And, then, the scripture says pathetically, “But Peter and John and the others did not believe her and they went to the tomb to see for themselves.” It is two thousand years later and little or nothing has changed. The voice of women proclaiming the presence of Christ goes largely unconfirmed. The call of women to minister goes largely unnoted. The commission of women to the church goes largely disdained.
Mary Magdalene is, no doubt about it, an important icon for the twenty-first century.

She calls men to listen for the call of the Christ in the messages of women.

She calls women to courage and men to humility.
She calls all of us to faith and fortitude, to unity and universalism, to a Christianity that rises above sexism, a religion that transcends the idolatry of maleness, and a commitment to the things of God that surmounts every obstacle and surpasses every system.
Mary Magdalene is a shining light of hope, a disciple of Christ, a model of the wholeness of life, in a world whose name is despair and in a church whose vision is yet, still, even now, partial.

See also the previous Wild Reed posts:
Mary of Magdala
Apostle to the Apostles
Thoughts on The Da Vinci Code
Thoughts on Ordination, Intellectual Dishonesty, and the Holy Spirit of which the Prophet Joel Speaks
Tell Them, Mary

Image: "Apostle to the Apostles" by Janet McKenzie. Writes Janet McKenzie of her painting: "The Gospel of John tells us that the Risen Jesus appeared to Mary Magdalene and told her 'Go to my brothers and tell them I am ascending to my Father and to your Father, to my God and your God' (John 20:17). She is seen here as in medieval paintings of her as preacher with the characteristic gesture of forefinger raised toward the heavens, proclaiming the Resurrection to Peter and 'the one whom Jesus loved.' The Beloved Disciple, who is sometimes understood as a symbol for the Johannine community, is listening to her but Peter is not."