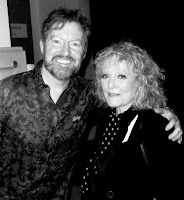 It's not every day that one gets to meet a living legend. But that's exactly what I was fortunate enough to do this past Sunday, May 12, when I met Petula Clark after seeing her perform at The Glasshouse in Port Macquarie.

The British singer, actress and composer whose career spans eight decades (she started singing as a child during World War II), is currently in Australia as part of her latest world tour.

After her show last Sunday, I briefly met and talked with Petula at the concert venue's stage door. It's a tradition of hers to meet with folks in this way after every show.

She's a lovely person, very warm and down to earth. She expressed surprise when I told her I live in Minneapolis, and I sensed that she wondered why I would do so when, as an Australian, I could live in a place like Port Macquarie. 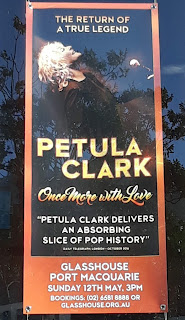 Petula clearly loves Port, speaking glowingly about it from the stage and staying in the city for a few days after her show. Mum and Dad and I saw her and her musical director Grant Sturiale strolling through the main part of town the next day.

Her show, by the way, was wonderful. She performed for over two hours and sang many of her era-defining pop hits from the 1960s ("Downtown," "I Know a Place," "Don't Sleep in the Subway," and This Is My Song") as well as songs from the various films and stage shows she's been involved with over the years. (Films like Goodbye, Mr. Chips and Finian's Rainbow, and stage shows such as Sunset Boulevard.)

Between songs she shared a number of insightful and entertaining anecdotes about working with people like Charlie Chaplin, Fred Astaire, Francis Ford Coppola, Peggy Lee, Elvis Presley, and John Lennon (whose anthem "Imagine," Petula interprets with grace and authority).

She also sang a number of songs from her more recent albums Lost In You and Living for Today. And I love how the title track of the latter includes a resolute though non-strident denouncement of mass destruction, corporate greed, and political corruption. Go Petula! . . . Of course, it's not the first time she's taken a stand for justice and peace.

For an 86-year-old, Petula is in remarkable voice, and she looks great. When she sings something wonderful comes over her. She positively glows with an inner warmth and light, which makes her look 20 years younger. Singing and performing is clearly her calling and passion.

I'm very happy and honored to have had the opportunity to not only experience Petula Clark in concert, but to also meet and briefly talk with her. 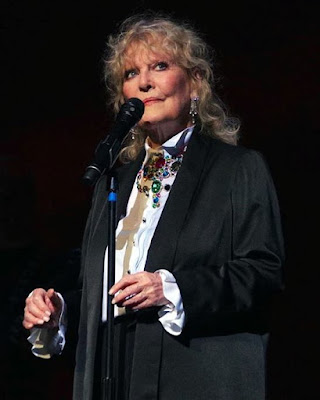 Above: Petula Clark in concert earlier this year in the U.S. This photo was taken by Clément Brillant and shared on the Facebook Petula Clark Appreciation Group. I include it in this post as the outfit Petula is wearing was one of two she wore for her May 12 concert in Port Macquarie.

Following is the official music video for "Sacrifice My Heart," one of a number of standout tracks from Petula's 2016 album From Now On.

Thank you for sharing your thoughts and wonderful moments with Petula Clark, Michael.

Oh, how wonderful for you, Michael. I have a special place in my heart for her too as her songs bring back so many dear memories of my childhood and specially beloved family. She surely is fabulous for her age!