Remembering David McCaffrey, One Year On 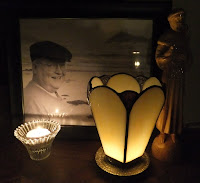 Yesterday, July 9, was the first anniversary of the death of my friend, colleague, and confidante David McCaffrey, co-founder of the Catholic Pastoral Committee on Sexual Minorities (CPCSM).

To commemorate David's life and legacy I hosted a gathering of folks who knew David through CPCSM and its most recent initiative, Catholics for Marriage Equality MN. We created sacred time and space together, shared food and wine, reminisced about our journey with David, and celebrated his gifts and achievements that inspire us still.

At one point we took turns reading aloud our friend Mary Lynn's Murphy's wonderful piece, "Remembering David McCaffrey," which she originally wrote for The Progressive Catholic Voice the day after his passing. Following are excerpts from Mary Lynne's tribute to David.


. . . David McCaffrey was a passionate man. For sure he had a temper, but he gave you an honest answer when you needed it. He had you-know-whats of steel when it came to facing down conflict, and never backed away from a struggle. He spoke out loud against the bigotry of presenters at an Archdiocesan "Marriage Panel" at the University of St. Thomas. It was he who sanctioned the suggestion of a "Die-In" at the Cathedral, never fearful of "making a spectacle."

David embodied the deepest sense of justice. He was relentless. At initial Safe Staff meetings with Catholic school administrators, David laid out our objectives with the precision of a Church historian, backed up by solid psychological data, and empathy for kids who were suffering. His professionalism, comfort with Catholic administrators, and obvious good heart helped establish our credibility. His understanding of boundary limits in schools set a professional basis for our effectiveness. His written summaries of the work were impeccable and detailed to the max. That man could write!

David was a man on fire in many respects, and the flames burned bright until the very last minute. He had co-convened Catholics For Marriage Equality MN to fight the anti-gay marriage amendment, and valiantly kept up communication websites despite health that was fading faster than we knew.

. . . David should take so many bows for his work both during and before my tenure at CPCSM. Though change within the Church has stalled in recent years, (to David's enormous frustration!) it is coming on steady as a freight train in America at large. David has been an undeniable part of that. The Safe Schools Initiative (in addition to all of the other initiatives David helped launch) extended far beyond the Catholic school doors, and helped lay the tracks for the engines of societal change. . . .

Dear Michael,
Thank you for sharing. Especially about how you all created sacred time and space to honor the memory of your friend. So many times we are all in such a hurry we forget to do this. Creating these moments are what keeps all of using doing the work which we must recognize as a spiritual work indeed. Blessings to you, and to all of those who are remembering David.
Robin Mavis

That year has gone so fast.