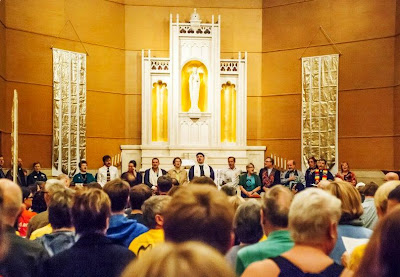 On the eve of tomorrow's historic Minnesota House vote to grant the rights and responsibilities of civil marriage to same-sex couples, hundreds of people of faith gathered earlier this evening at Christ on Capitol Hill Lutheran Church to "pray a new reality into being" – the reality of marriage equality for all, regardless of sexual orientation. The gathering was organized by the Faith Organizing Roundtable. 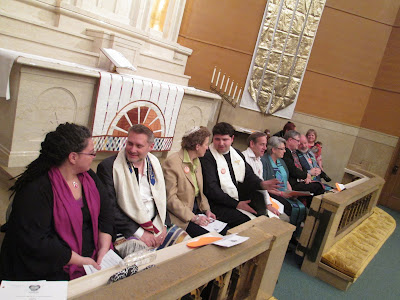 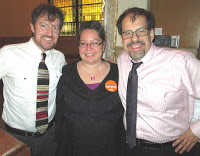 As Executive Coordinator of Catholics for Marriage Equality MN, I was honored to stand with representatives from a number of faith traditions – Christian, Jewish and Wiccan. With me representing local Catholics supportive of marriage equality were Jim Smith of C4ME-MN and DignityUSA and Joan Howe Pullis of Pax Christi Catholic Community.

Above left: Standing at left with Robin Mavis and David Lohman. You may recall that David is the gifted songwriter and musician who worked with local Catholics this time last year in the making of a music video for his song "For All the Children." For a behind-the-scenes look at the making of this video, click here. To hear and view the finished video, click here. 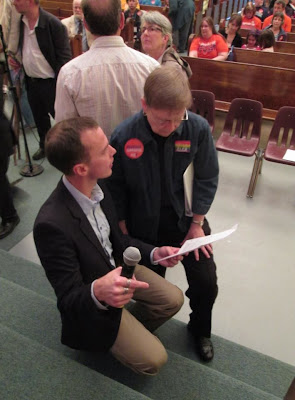 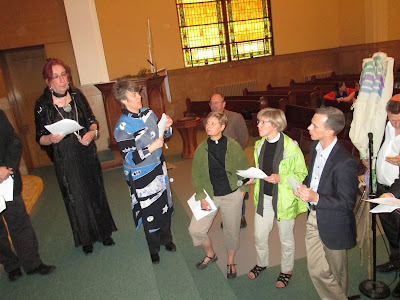 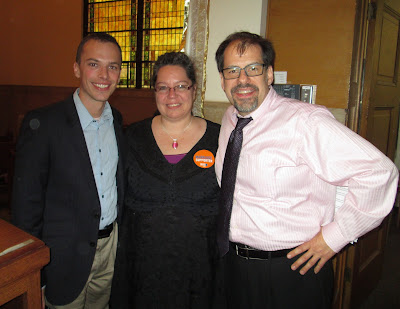 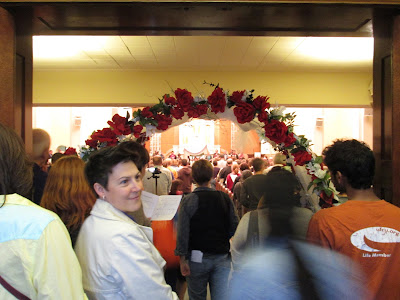 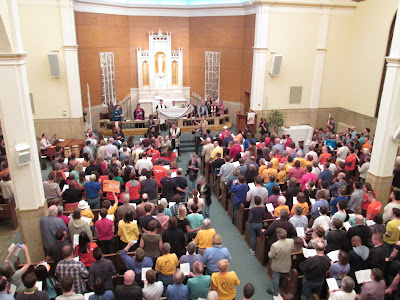 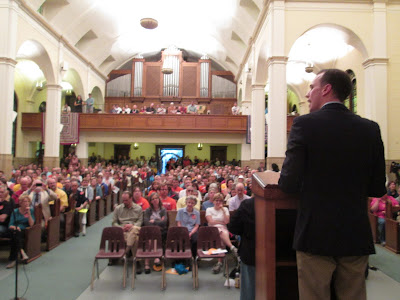 Above: Javen Swanson, Faith Director at OutFront Minnesota, welcomes attendees to the May 8 Multi-Faith Rally for the Freedom to Marry.

As part of his welcoming remarks, Javen shared the following words of Rev. Anya Sammler:

We come together with different images of the holy, of what God is or what God is not. But the beauty of our diversity must not hinder us from coming together in service to a purpose that is greater than any one of our lives. It is in this spirit that I invite you into a space of prayer. 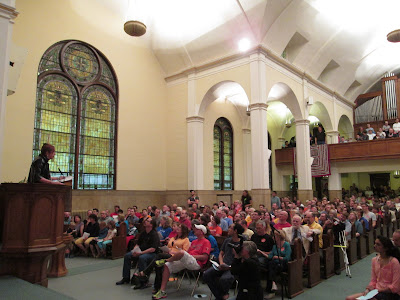 One of the most powerful parts of the vigil was when attendees where invited to "lift up the names and stories of those whose work and mentoring bring us here tonight . . . those who've shaped us and brought us thus far on our way." I named and honored Bill Kummer (1948-2006) and David McCaffrey (1947-2011), co-founders in 1980 of the Catholic Pastoral Committee on Sexual Minorities (CPCSM). Catholics for Marriage Equality MN is the latest in a long line of CPCSM initiatives established to respond to justice issues of the day. Over the years these have included LGBT sensitivity training in parishes during the 1980s, our Safe Schools Initiative of the 1990s, and the issue of marriage equality since 2004 (see, for example, the Fall 2004 Rainbow Spirit article "CPCSM Offers a Progressive Catholic Voice at the Capitol," reprinted at the end of this Wild Reed post from 2007).

Above: Rabbi Michael Latz stands with others who are holding a Chuppah, a traditional Jewish marriage canopy. 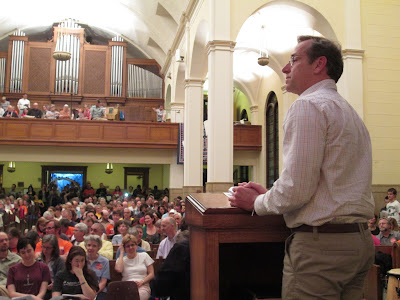 Above: Jim Smith of Catholics for Marriage Equality MN and DignityUSA.

Along with Rev. Janne Eller-Isaacs and all those assembled, Jim recited the following Litany of Strength and Commitment:

One: If you believe that the joining of two lives to sustain, comfort, uphold, care and bring joy to one another and to the world is a sacred and holy gift, then say with me . . .

One: If you see the divine in our diverse expressions of relationship and celebrate the multitude of ways that we are family with one another, then say with me . . .

One: If your faith calls you to build a nation where children are protected, dignity is guarded, families are embraced, freedom is honored and equality is the law of the land, then say with me . . .

One: If you have trust that love and justice will ultimately prevail over fear and prejudice, then say with me . . .

One: With the power of the prophets to embolden us; the dreams of the dreamers to inspire us; the prayers of the faithful to sustain us; and the love of lovers to awaken us . . .

All: We commit ourselves to this holy task of marriage equality. May God grant us the courage and strength to keep on loving . . . no matter what the legislature says! Amen and Amen. 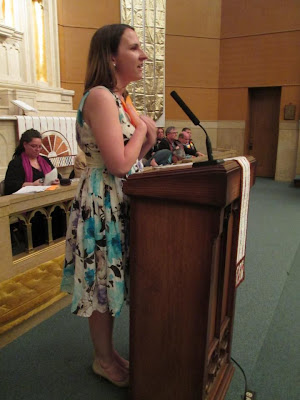 Above: Sabrina Brys Mauritz of Minnesotans United invites vigil participants to join in a procession to the nearby State Capitol. 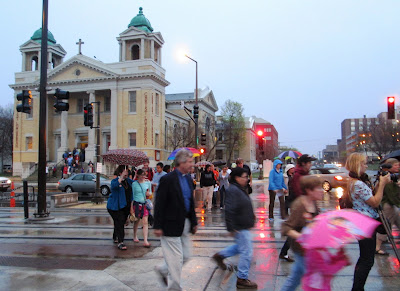 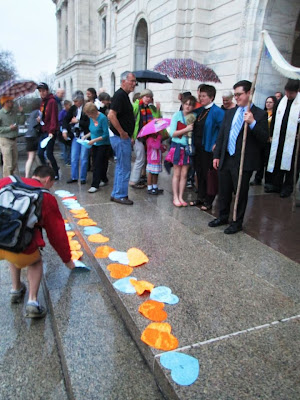 Above: On the Capitol steps people placed their prayers for marriage equality, written on heart-shaped pieces of paper. 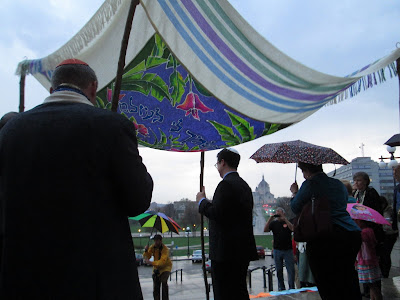 I like how in the photo above the Roman Catholic Cathedral of St. Paul, seat of the anti-marriage equality Archbishop John Nienstedt, is pictured under our symbolic canopy of love. It reminds me of Edwin Markham's famous quote: "He drew a circle that shut me out. Heretic, rebel, a thing to flout. But Love and I had the wit to win: We drew a circle that took him in." 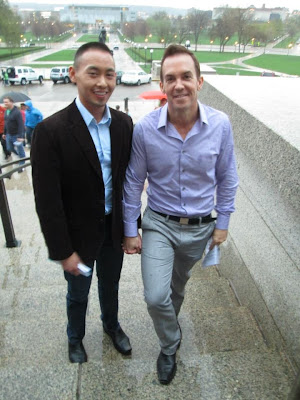 Above and below: Participants in the May 8 Multi-Faith Vigil for the Freedom to Marry gather on the steps of the Minnesota State Capitol. 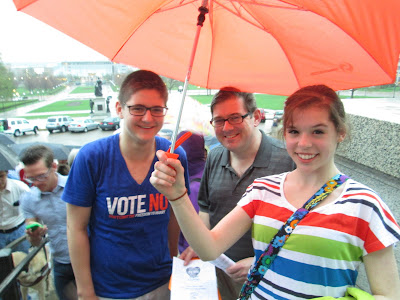 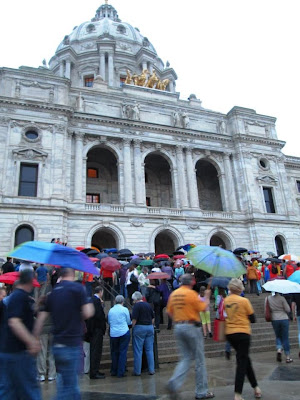 For ev'ryone born a place at the table,
to live without fear, and simply to be;
to work, to speak out,
to witness and worship.
For ev'ry one born, the right to be free.

For gay and for straight, a place at the table,
transgender and queer in one single tree,
engaging each gift and blessing each cov'nant.
For gay and straight, a new way to be.

– Shirley Erena Murray and Anon.
"For Everyone Born"

Thank you for documenting this event for those of us not in attendance. How beautiful. Praying for a good outcome today.

I feel as if I were there.

Years of seriously hard work has paid off. Congratulations to all involved - and see my inadequate tribute at QTC:

Thank you, Michael, and all Catholic organizers who have worked so hard to make marriage equality a reality in Minnesota.