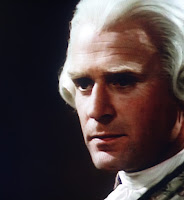 I continue this evening with my sharing of Verity's story from Winston Graham's Poldark novels. As I've mentioned previously, I'm currently re-reading all twelve novels in this series, and I'm happy to share my enthusiasm and love for them here at The Wild Reed!

A brief synopsis: Verity is the cousin of Ross Poldark, the central character in Graham's acclaimed series of novels set in Cornwall in the years 1783-1820. Verity's romance with Captain Blamey has been quashed by her brother, Francis, and her father, Charles, and she is resigned to a life of loss and loneliness. Ross' wife, Demelza, however, decides to intervene, journeying secretly to Falmouth to see Captain Blamey. Their meeting does not go well. Several weeks later, however, when out walking near her home, Demelza is startled by the appearance of Captain Blamey.

The following excerpt from Winston Graham's Demelza: A Novel of Cornwall, 1788-1790 continues the story.

"I hope you'll accept my excuses, ma'am. I hadn't any thought of scaring you."

He was standing beside her, thinking that the shock had brought her near to fainting. But it would have taken far more than that to send Demelza over. He kept a hand at her elbow until she was again sitting on the wall. Out of the corner of her eye she thought there was no arrogance in his expression.

She had sworn aloud at the shock, forgetting her manners and annoyed with herself the moment after.

"It is a bad beginning," he said, "to have come here with an apology to make and to need another at the outset."

"I had not thought to see you in these parts."

"Nor I to see myself, ma'am. Ever again.

"Then what brings you here, Captain Blamey?"

"Your visit to see me. For after it I have had no peace of mind."

He kept moistening his lips and frowning, as if with turns of pain.

She said: "How did you—Have you walked from Falmouth?"

"I came on foot from Grambler, hoping to be less conspicuous if you should have company. I was in Truro this forenoon and saw both your husband and—and Francis Poldark. Knowing they would be away, the need was too strong."

"I am expecting Ross back any moment."

"Then I'd best say what can be said while there is time. No doubt you took a very bad opinion of me from our first meeting, Mrs. Poldark."

Demelza stared at her feet. "I was a small matter put out."

"Your visit was sprung on me. It was something I had put away. . . . It was something I had put away. . . . Its—its sudden outcropping brought with it all the bitterness." He put his hat down on the wall. "I am, I grant, a man of strong temper. To control it has been the work of a lifetime. Sometimes still there are moments when the struggle returns. But God forbid that I should quarrel with those who wish me well."

"Not even your own sailors?" said Demelza, faintly malicious for once.

"The sailors quarrel with all their captains just now. For years they have eked out their poor wages by smuggling goods into the ports on each voyage. But it has come to such a pass that we are held to blame. Captain Clarke in Swan of Flushing was detained in Jamaica under prosecution, and others will fare the same. So we have reached an agreement on the belongings that each sailor shall carry. It's not surprising they dislike it, but this is no personal quarrel between my crew and myself: it is a commotion throughout the packet service."

"I met you that day already angry from a disturbance. When you spoke it seemed at first an interference. Only later I came to count the exertion you had been to. Then I wished it was possible to have you back to thank you for what you had done and said."

"Oh, it was nothin'. It was not that I wanted, if you understand—"

"Since then," he said, "there has been no peace of mind. To Lisbon and back I carried what you said of Verity. You were allowed time to say little enough, maybe. But . . . Verity had never got over it. You said that, didn't you? And that she was ten years older than her age. How often I've thought of what it means. Ailing but not ill, you said. Because of me. Ailing but not ill. Ten years older than her age. You know, I never knew what Verity's age was. At the time I had her love. We didn't think of such things. I am forty-one, ma'am. She didn't look old when I knew her. Is that what her brother and father have saved her for? There's no more rest until I've seen her. That much you've done, Mistress Poldark, whatever the outcome. The move is with you again. That's what I came to say."

His eyes had been on her the whole time he was speaking, and she had not felt able to break from his gaze. At last her glance moved to the plain of Grambler; she got up.

Blamey stared down with puckered eyes. "Is he against me now? He wasn't at the time."

"Not against you. He was against me stirring up what he thought should be left alone. He'd be angry with me if he knew."

He looked at her. "Verity has a good friend in you, ma'am. You take risks for your friends."

"I have a good friend in Verity," she said. "But don't stand there or he'll see you. Let us move behind the wall."

"What is the best way back?"

"Those fir trees. Wait there until we have gone down."

"When can I see you again? What arrangements can be made?"

"Shall you tell her?" he said eagerly.

"I don't think so. Not at the start. I—hadn't thought more because I'd given up hope of ever anything being done—since I came to Falmouth. It will depend how I can arrange . . ."

She bit her lip, for she could hardly form her letters. "All right," she promised. "I'll leave you know. What if you're away?"

"I sail on Saturday, there's no choice for that. Set a time for the third week of next month if possible. It will be safer that way. If—"

"Look," said Demelza urgently. "Twill be in Truro; that's safest. I'll send you word, just a place and time. I can't do more'n that. It will be up to you then."

She watched him leave the shelter of the mine building and run quickly to the trees. At her first meeting in Falmouth she could not imagine what Verity had seen in him to take his loss so to heart. After this she was more able to understand.

NEXT: Rendezvous in Truro