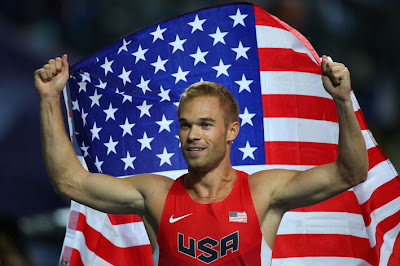 Back in April 2011 I started highlighting well-known straight men who, regardless of the risks to their careers or popularity, have courageously chosen to publicly support LGBT people and their civil rights. To date, The Wild Reed's "What a Man!" series has spotlighted six sportsmen (Ben Cohen, Sean Avery, Hudson Taylor, Nick Youngquest, Chris Kluwe, and Brendon Ayanbadejo) and one U.S. Republican politician (John Kriesel).

This evening I spotlight U.S. runner Nick Symmonds who spoke out for LGBT rights in Russia yesterday after winning the silver medal at this week's World Track and Field Championships in Moscow. Russia, of course, has been in the news recently for its harsh and sweeping law against "gay propaganda."

Here's how The Guardian's Alec Luhn covers the story:

US runner Nick Symmonds became the first international athlete to denounce Russia's law against "gay propaganda" on the country's soil after winning a medal at the world athletics championships in Moscow.

Symmonds dedicated his silver medal in the 800m on Tuesday to his gay and lesbian friends at home and called for lesbian, gay, bisexual and transgender equality, news agencies reported.

"As much as I can speak out about it, I believe that all humans deserve equality however God made them," Symmonds said after the race at Luzhniki stadium.

"Whether you're gay, straight, black, white, we all deserve the same rights. If there's anything I can do to champion the cause and further it I will, shy of getting arrested.

"I respect Russians' ability to govern their people. I disagree with their laws."

In an article for Runner's World this month, Symmonds criticised the law passed in June banning the propaganda of non-traditional sexual relations among minors, but said he would not discuss the subject in Russia.

Symmonds's comments in Moscow could run foul of the broadly worded law, which prohibits statements maintaining the "equivalence of traditional and non-traditional sexual relations". Foreign citizens who violate the law in the media face a fine of 50,000 to 100,000 rubles (£975 to £1,950), arrest for up to 15 days and deportation.

The Investigative Committee, which accepts requests for information only via mail, could not be reached to comment on whether charges will be brought against Symmonds.

Following international calls for a boycott of the 2014 Olympics in Sochi, the International Olympic Committee sought "clarifications" from the Russian government on Friday about how the law would affect the games. Russia's interior ministry confirmed on Monday that the law would be enforced during the event.

Fifa has also asked the Russian authorities for clarification and more details on the law in the runup to the 2018 World Cup in Russia, the organisation said on Tuesday. 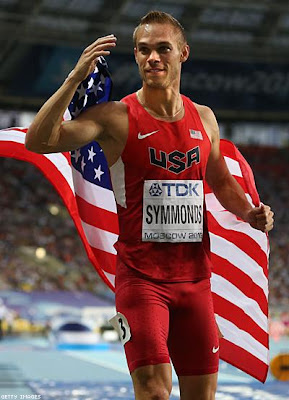 Labels: What a Man