Ramesh Bjonnes on Rumi and Shams as Gay Lovers 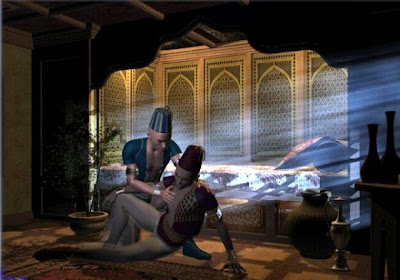 There is some kiss we want
with our whole lives,
the touch of Spirit on the body.

Seawater begs the pearl
to break its shell.

And the lily, how passionately
it needs some wild Darling!

At night, I open the window
and ask the moon to come
and press its face into mine.
Breathe into me.

The moon won't use the door,
only the window.

It's well known that the renowned Sufi poet Jelaluddin Rumi had an intense relationship with fellow mystic Shams of Tabriz. A number of modern thinkers, writers, gay rights activists, and artists have mused on the possibility that the two men were lovers in the physical, sexual sense.

Author, yogi, and Prama Institute co-founder Ramesh Bjonnes has written one of the best responses I've come across to the idea of Rumi and Shams as gay lovers. For one thing, he offers an informed skepticism of this idea without being disparaging of either homosexuality or same-sex relationships. I also appreciate Bjonnes' highlighting of some of the significant differences between Eastern and Western spirituality in terms of non-sexual expression of intimacy. "We just do not hug, hold hands with and gaze into the eyes of our priests in the West the way ecstatic Easterners have done for centuries," he writes. "Nor do men walk the streets holding hands the way people do in India and Iran where Rumi lived."

For these reasons and others, I continue The Wild Reed's series of posts on Sufism by sharing (with added images and links) an excerpt from Bjonnes' 2011 Elephant Journal article "Were the Poet Rumi and Shams Gay Lovers? (Or Was It Simply Bhakti Love?)." 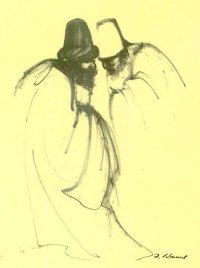 . . . Personally, I think the idea of Rumi and Shams being gay is one big contemporary projection. Not, of course, that being gay itself is a problem, but in this case I think it is unlikely. In the West, we don’t really have a tradition of the guru/disciple relationship we see in Sufism, Tantra and other ecstatic traditions of the East. Hence we tend to be overly skeptical and distrustful.

We often equate this kind of intimacy in sexual terms, even though it may not be there at all. That some contemporary gurus indeed had sexual relationships with their disciples just compounds the confusion.

The use of terms like Beloved and Lover toward one’s teacher is not common in the West. There is no Bhakti tradition to speak of in Western mysticism (except, perhaps, in some black Baptist churches!) that parallels the ones found in Sufism and Yoga. We just do not hug, hold hands with and gaze into the eyes of our priests in the West the way these ecstatic Easterners have done for centuries. Nor do men walk the streets holding hands the way people do in India and Iran where Rumi lived.

There is also no tradition of sexual imagery in the spiritual poetry of the West. In the East, sexual union also signifies inner ecstasies, Tantric kundalini energies. We have no deep tradition in which words like “wine” and “drunkard” and “tavern” signify spiritual states of whirling drunkenness.

We just don’t have a tradition for getting high on God in the West the way they do it in the East. Those wild yoga rhythms are coming to us slowly, but they are not yet in our bones and in our blood. We are still way too spiritually timid for those rhythms.

The only time we Westerners truly leave or enter our bodies in wild abandon is during drugs, sex and rock & roll. Hardly do we ever whirl with and make love to God or our teacher the way Rumi or Kabir or Mirabai did. When was the last time you fell on the floor in trance during kirtan the way they do it in India?

In other words, we distrust people who claim that they are talking to God the way that Ramakrishna talked to Mother Kali, the way that Mirabai talked to and made love to her Beloved Krishna. We put people like that in institutions over here. In India, they are sometimes declared saints.

In India, sadhus can dance naked in the streets and still be considered holy. In our Calvinist piety, we Westerners have been sitting on our hands too long in church. We distrust people who are both sane and talking to inner images at the same time.

By saying that hearing voices only happens to crazy people, or that sexual imagery in poetry only represents sex, we neglect a whole tradition of spirituality that expressed itself even in the mystical West, in people like St John, St Francis and Teresa of Avila.

I have seen plenty of people roll on the floor, cry in ecstasy and talk to inner visions; hell I’ve done it myself. And none of us have been institutionalized; not yet.

So to conflate Rumi’s love for his Beloved teacher Shams to a gay relationship is probably as mistaken as to conflate Ramakrishna’s spiritual genius, who is considered the Einstein of consciousness by many Indian scholars today, to a babbling lunatic. That, I think, is reductionism at its worst.

That, I think, is like mistaking a mild kundalini awakening with an insect crawling up your back. Or, conversely, to mistake the crawling insect for kundalini. Nothing but a projection. The inner world is both real and unreal. It all depends, and sometimes, only those who have taken the journey can tell the difference.

So, in a strange way, I suggest that those who reduce the rich inner world of the spiritual mystic of the stature of Rumi to simply being gay (in reality, it does not matter whether he was gay or heterosexual, of course) is doing the opposite of what they think they are doing; they sanitize his image; they block the view of the full spectrum of the mystic consciousness by reducing it to the realm of the flesh only.

While looking for Shams after his mysterious disappearance, Rumi finally realized:

“Why should I seek? I am the same as He. His essence speaks through me. I have been looking for myself!”

While looking for ourselves, we sometimes need guides, gurus, mystics who have walked the path before us. Love, said Krishna, in the form of Bhakti Yoga, can quicken and intensify that road considerably. 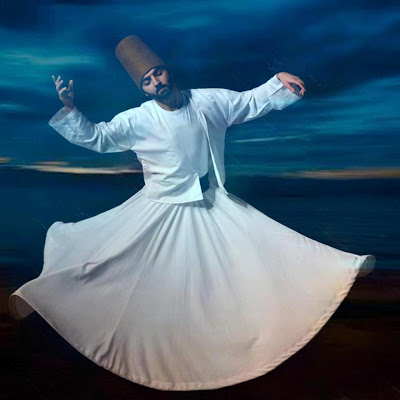 See also the previous Wild Reed posts:
• Rumi and Shams: A Love of Another Kind
• It Happens All the Time in Heaven
• A Dance of Divine Love
• Love as Exploring Vulnerability
• "More Lovely Than the Dawn": God as Divine Lover
• The Many Manifestations of God's Loving Embrace
• The Holy Pleasure of Intimacy
• Beyond Limited Ideas of "Real" Gay Sex
• Never Say It Is Not God