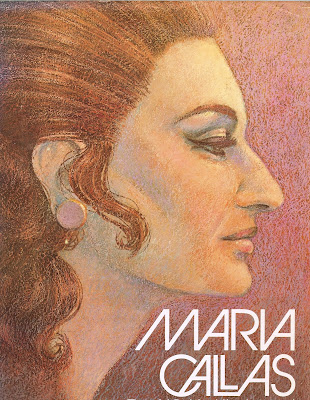 If you were online today you no doubt saw that the Google logo honors opera great Maria Callas on what would have been her 90th birthday. The animation (pictured below) shows the legendary soprano performing on stage and channeling through her expressive arm and hand movements what fellow singer George London called her unique "energy of mind and spirit."

Here at The Wild Reed I honor Maria Callas on this special day by sharing an excerpt from John Ardoin's insightful essay "The Art and the Life" in the now out-of-print 1974 book Callas (which I was fortunate to have found at Magers and Quinn's used books store in Uptown earlier this year!). Enjoy! 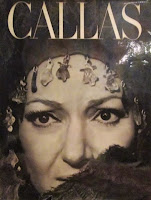 Three things come to mind when I summon a mental image of Callas: her eyes, her hands, her walk. Callas' face was not beautiful in the conventional sense, but it was better than beautiful for the needs of the theater. Offstage, her eyes, mouth, and nose have a quality of exaggeration. But these very proportions were what made it possible for her face to speak so eloquently from the stage of even the largest opera house. People who saw her from the upper reaches of La Scala or the Metropolitan Opera are still able to describe details – a spark of a tear in her eyes – with the accuracy of one sitting downstairs. This facial projection had all the immediacy of a cinematic close-up.

. . . Oddly enough, one noticed Callas' mouth most when she was not singing. Then, it so often shaped itself into a peculiar half-smile, a bemused look as though she sensed an irony which had escaped the rest of us. This look had about it all the enigmatic beauty writers have long ascribed to Leonardo's La Gioconda. It was easier to digest those snarled, black looks that accompanied the rages of Medea or Norma than this simpler, infinitely more mysterious glance. 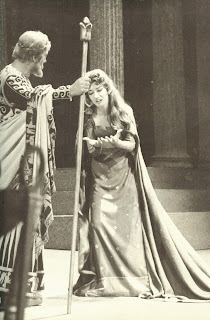 When one wasn't mesmerized by her face, one was held by her arms and hands. They too sang with a range of mood and accent comparable to those in her voice. When she spread her arms full, and usually with a slight arch in her wrists, her long, slim fingers seemed to extend from stage left to stage right, so powerful was the gesture. She usually kept the fingers of her open hand tightly together, so that the line of her arm came to a single, fine point rather than a diffused or blunted one. Yet she could also contract her arms and hands to the most intimate of gestures and frequently wrapped herself in them, cradling her body as she sang. Except in moments of extreme urgency, Callas moved almost as in slow motion. When she moved more forcefully, it was not so much a walk as a lanky stride of strong, decisive steps (a "Gary Cooper lope," one writer termed it). But more often she stood still, knowing full well the effectiveness of making the drama come to her. 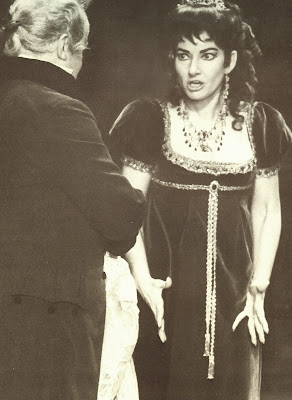 Through director Sandro Sequi did not work with Callas in a production, he watch her performances with the trained eye of a man who thinks music in terms of movement. To him, "she was never in a hurry. Everything was very paced, proportioned, classical, precise. Probably this was her Greek origin, I mean the history behind her which came out. When one has seen Callas only in photographs and not on stage, you might think she was like a crazy woman in Medea, for example, running around the stage and shouting. Not at all. She was extremely powerful but extremely stylized. Her gestures were not many, if you consider the whole interpretation of a role. I don't think she did more than twenty gestures in a performance. But she was capable of standing ten minutes without moving a hand or finger, compelling everyone to look at her." 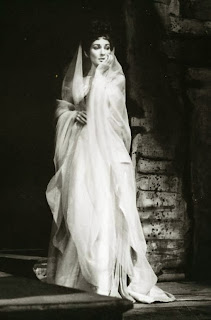 This gift of acting without movement, of commanding a stage while immobile, belonged to George London as well, Callas' Scarpia in Tosca at the Metropolitan in 1956. He has explained the force as "an inner spiritual and artistic motor, something which is always running and is part of an internal identification with character. That kind of energy, which is an energy of mind and spirit, has an irresistible thrust into an audience. But to work, it requires an innate dramatic personality. You can't teach it to someone. It's like a talent. How do you teach that? You can teach the superficial aspects of what must be enacted, but you cannot create a Callas out of Miss X, even if she were to do in every detail what Callas did in a given situation onstage, because it came from Callas' inner strength and that cannot be fabricated."

Franco Zeffirelli, who directed Callas in five productions, felt Herbert von Karajan (stage director and conductor for her at Scala Lucias) most successfully capitalized on this quality. "Karajin didn't even try to direct," Zeffirelli remembers. "He just arranged everything around her. She did the best Mad Scene with a follow-spot like a ballerina against black. Nothing else. He let her be music, absolute music. It was the best you could do with Callas. I think he was the only one who really got it. . . . You could spend hours looking at [Callas]. It was tremendous, that half-smile of hers, the mouth, the eyes. She was enchanting, living music, the perfect illumination of the music. No director taught her this, she was born with it, she found this way of trusting herself, the right gesture, the right moment, not one motion more or less than was necessary, She somehow knew the incredible trick of achieving the maximum with a minimum of effort. . . . For me, Maria is always a miracle. You cannot understand or explain her. . . . What is it this woman has? I don't know, but when that miracle happens, she is a new soul, a new entity."

Below is footage of Maria Callas performing the duet "Miserere"/"Lord, thy mercy on this soul" from Il trovatore at a recital in Paris in 1958. About this performance John Ardoin writes the following in The Callas Legacy: The Complete Guide to Her Recordings on Compact Disc:

The year 1958 came to a close for Callas with her debut in Paris, her future home, at a gala Legion of Honor concert carried live throughout Europe on television. . . . The Il trovatore sequence, minus cabaletta, lacks the full sense of night and mystery Callas usually wove into the music, nor are her top notes too steady. The cadenza is pushed and the final note held more by Callas' throat than her breath. The chorus is wretched in the "Miserere," and Callas' voice takes flight only in the second verse. But, as was frequently the case with Callas, seeing her makes hearing her more exciting, and the [footage] of the "Miserere" is riveting.