Time for a Fresh Start in the Archdiocese of St. Paul-Minneapolis 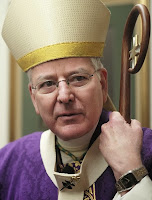 In the wake of news that Archbishop John Nienstedt is under police investigation resulting from an allegation that he inappropriately touched a boy in 2009, I think Mike Tegeder, local priest and longtime critic of Nienstedt's leadership style and focus, says it best:

I feel very sorry for the archbishop. I hope this is just a misunderstanding or some misinterpretation. It's certainly very sad for him. These things can't be very pleasant, and I think it would be good for him to have a fresh start, and it would be good for our archdiocese to have a fresh start and just allow things to move forward here. This is not the way that I would hope that it would come about.

According to the chancery, Nienstedt has "stepped aside from all public ministry" for the duration of the investigation. Tegeder, however, is pushing for Nienstedt's resignation, regardless of the results of the police investigation. This is because Tegeder, like many area Catholics, is, as Minnesota Public Radio puts it, "troubled by the way the archbishop has handled the clergy sex abuse crisis, his stance on the recent marriage amendment battle and some of his financial decisions."

To be honest, I'm highly skeptical of this accusation of inappropriate touch being made against the archbishop, especially given its alleged circumstances – a very public group photo session following a confirmation ceremony. I believe Nienstedt when he says, "this allegation is absolutely and entirely false."

Yet it's painfully clear that we need a "fresh start" in our local church. My prayer is that the archbishop, like Pope Benedict XVI before him, will find the courage to step aside for the good of the community and, in so doing, help open the way for the Spirit to bring about healing and reform. We're seeing this on the global level with Pope Francis. Who's to say that with a new archbishop in the Archdiocese of St. Paul-Minneapolis, one who is hopefully selected with input from the laity, this same healing and reform could not also be experienced within our local church?

I couldn't agree more, Michael. He just doesn't seem to get it.

I agree with you 100%, Michael. I think the accusation is fishy. But since it's been made, it must be investigated.

Far more troubling to me is Neinstedt's complete failure as a shepherd, for all the reasons you list plus this one: He's not cooperating with the ongoing investigation. (http://www.mprnews.org/story/2013/12/17/police-investigate-archbishop?from=hp)

Thanks for your feedback, Tine, and for the link. I've added to this post's list of related off-site links.