"A Dark Timelessness and Stillness Surrounds Her Wild Abandonment" 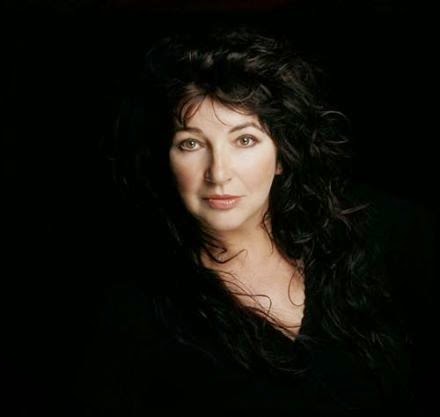 Kate Bush's series of "Before the Dawn" concerts concluded last night at London's Hammersmith Apollo. The concerts marked the singer's first return to the stage since The Tour Of Life in 1979.

To say "Before the Dawn" was a success would be an understatement. Tickets for the 22-date concert series sold out within fifteen minutes of going on sale in March and, throughout its 6-week run, the show, which incorporates music, theatre and film, has been hailed as an "ecstatic triumph," as "stunning," "awe-inspiring," "epic," "a masterpiece." (For The Wild Reed's compilation of review highlights, see the previous post, Can You See the Lark Ascending?)

Due to the overwhelming response to and caliber of her comeback to the stage, Kate has been nominated for two 2014 Q Awards: Best Act in the World Today and Best Live Act. 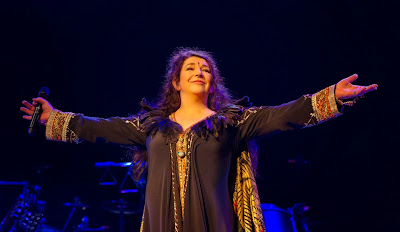 One of the most interesting reviews I've come across of "Before the Dawn" is by Martin "Youth" Glover of the influential band Killing Joke. With eloquence and insight, Glover explores the powerful mysticism that imbues the persona and music of Kate Bush.

Following (with added links) are excerpts from Glover's September 30 review. 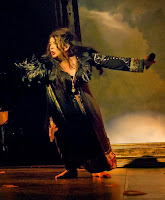 [Kate opened her show] with "Lily" [which] lyrically is an explicit magical ceremony, a literal invocation/initiation in the style of the Rosicurician Orders, a la the Golden Dawn school of the western magical tradition. Gabriel before me, Raphael behind me . . . in the circle of fire.

This is key to understanding Kate. She has her own cult, her own mystery school tradition. Her unique strand of Shaivism, Dionysian and Druid philosophy, loosely wrapped up in a song and dance tradition. It’s part magical realism, overt nature spirituality and art house. (Hard to pull off in cynical, postmodern, narcissistic Britain)

She not only pulled that rabbit out of that hat but also managed to convert each and every one of us to her own personal church of the big sky, a church whose priests are owls, ravens, trees and clouds. When asked once who her favourite singers were, she replied “Nightingale, Blackbird and Thrush.” There is a barrenness in religions today. Whether in Christianity, Islam or false prophet new age gurus, humanity is rudderless, bedazzled by materialism. Kate’s communion with nature is the antidote. It is a call to joy, a celebration of the sublime. It’s about the intoxication of love and the ecstasy that follows. [It's] where wisdom lies, hidden deep within its mystical and poetic roots.

Kate’s "religion" is the tiny spark of light that defeats the dark forces that seek dominion over the natural world. . . . She exemplifies English pagan beauty. A dark timelessness and stillness surrounds her wild abandonment, whilst her voice charges at you like Boudicca returned, riding a golden chariot of weird melody, harmony and bitter dissonance.

. . . Kate is a once in a generation, like Blake, Lorca, Tennyson. She can master the avant garde within a pop dynamic, consistently delivering over decades, [and] mash up dozens of polarising, opposing genres of influences into a single focus with clarity and without compromise. (That's genius.) Intellectual, super serious, yet still very silly and lots of fun. . . . I felt very lucky, privileged to be able to bear witness to her mythical vision made manifest, her great masterpiece.

. . . The finale was "Cloudbusting," which she turned into a crowd singalong anthem, worthy enough to compete with Blake's "Jerusalem." . . . The vibe was amazing, magic in the air, Thunder in our hearts. Maybe the equinox helped but I couldn’t imagine anything but rapture, even from the most hardened cynic, experiencing this performance.

As we left I felt like I had just been slapped with a wet kipper, a different person than the one who entered three hours before. . . . The audience staggered out like stunned mullets and floated off into the brisk, river misty Hammersmith night, the world ever so slightly changed. 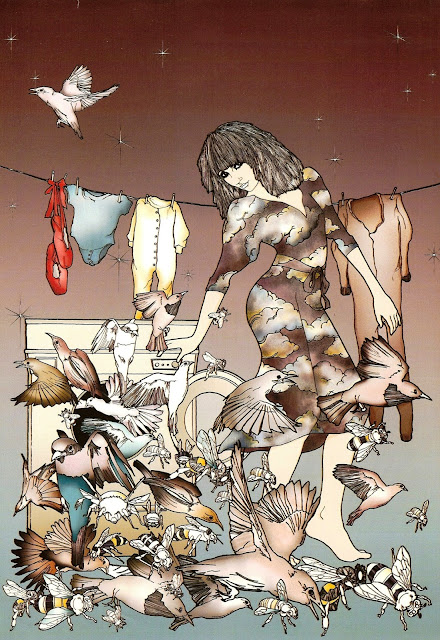 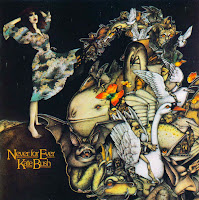 Wylie's artwork playfully and beautifully pays homage to the magical realism of Kate's persona and music. The depiction of Kate's dress and hair, along with the sense of things bursting forth, reflects the cover of Kate's 1980 album Never for Ever (left) but updates it with references to her then-new album. These references include the washing machine of "Mrs Bartolozzi" and the songbirds of Aerial's "A Sky of Honey" suite. Other aspects of Wylie's illustration reference Kate's 1993 album The Red Shoes, her time away while raising her son Bertie, and the honey-making bees of the, er, b-side track "You Want Alchemy."

Speaking of alchemy, to hear "How to Be Invisible," a track from Kate's 2005 album Aerial, click here.

See also the previous Wild Reed posts:
• The Piper at the Gates of Dawn
• "Joined at the Heart": Robert Thompson on Christianity and Sufism
• Toby Johnson on the Mysticism of Andrew Harvey
• In the Garden of Spirituality – Andrew Harvey
• Jesus: Mystic and Prophet
• A Return to the Spirit

I wish you could have been there and sat next to Martin Glover. What was it they said in the 60's? Way out?

Sorry. They said "Far Out." And this performance sounds much more profound than that. She said her favorite singers are Nightingale, Blackbird and Thrush? How can a person not be captivated?