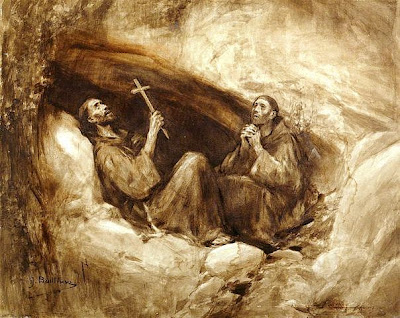 Drawing on the findings of Franciscan scholar Kevin Elphick, Kittredge Cherry posted earlier today on her blog an insightful commentary to mark the feast day of St. Francis Assisi.

Following is an excerpt from Kitt's post, one entitled "Francis of Assisi's Queer Side Revealed."

Historical records reveal a queer side to Saint Francis of Assisi, one of the most beloved religious figures of all time. The 13th-century friar is celebrated for loving animals, hugging lepers, and praying for peace, but few know about his love for another man and his gender nonconformity. His feast day is today (October 4).

Francis is “a uniquely gender-bending historic figure” according to Franciscan scholar Kevin Elphick He has spent years researching the queer side of Saint Francis, including travel to to the Italian town of Assisi. There he photographed artwork depicting the man he believes may have been the saint’s beloved soulmate: Brother Elias of Cortona.

When Francis (1181-1226) was a young man, he had an unnamed male companion whom he dearly loved – and who was written out of history after the first biography. Other Franciscan friars referred to Francis as “Mother” during his lifetime. He encouraged his friars to be mothers to each other when in hermitage together, and used other gender-bending metaphors to describe the spiritual life. He experienced a vision of an all-female Trinity, who in turn saluted him as “Lady Poverty,” a title that he welcomed.

The earliest companion of Francis, a man whom Francis “loved more than any other because he was the same age” and because of “the great familiarity of their mutual affection” remains nameless. Elphick's research suggests that the unnamed soulmate of Saint Francis was Brother Elias of Cortona. Francis called Elias “Mother” and gave him a special blessing. Elias expressed much concern about Francis’ body and his health. Francis and Elias each describe the other in affectionate terms. However, very quickly after Francis died, Elias is written out of history and discredited. Elphick presents the scholarly evidence about their relationship in the detailed article at the Jesus in Love Blog: “Brother Elias: Soulmate to Saint Francis of Assisi?”

. . . In his thesis, Elphick points out, “Because homosexuality and ‘gay’ identities are modern constructs, it is impossible and inaccurate to attempt to read these modern categories into the personalities of historical figures.” Instead he uses the word “homoaffectional” to describe the relationship of Francis and his beloved companion.

“[Francis and Elias'] relationship is inescapably homoaffectional," writes Elphick, “describing a shared intimacy between two Medieval men. That this first companion disappears from the later tradition is cause for suspicion and further inquiry. . . . The tone in [Thomas of] Celano’s earliest account captures the flavor and intimacy of this relationship, perhaps too much so for an increasingly homophobic church and society.”

To read Kitt's article "Francis of Assisi's Queer Side Revealed" in its entirety, click here.

Image: Francis of Assisi and the man he loved in “They Shelter in a Cave” by José Benlliure y Gil, 1926. (Wikimedia Commons)