Doris Lessing on the Sufi Way

A year ago today acclaimed author Doris Lessing died at the age of 94.

I remember and celebrate Doris Lessing today by sharing excerpts from "In the World, Not of It," one of her many writings on the Sufi Way. It's an essay I find particularly helpful, and one that was first published in the 1974 book A Small Personal Voice.

That East must ever be East and West must be West is not a belief which is subscribed to by Sufis, who claim that Sufism, in its reality, not necessarily under the name, is continuously in operation in every culture. Sometimes invisible, it is at times offered as openly as goods in a supermarket. When this happens, it is is expected by them that there will be hostility from . . . authoritarian bodies. During well over 1,000 years of connected literary and psychological tradition, embracing Spain, North Africa, Central Asia, and the Middle East, they have almost invariably clashed with narrow thinkers. . . . Some past patterns are unfamiliar to us; others can still be instructive, for in one form or another they repeat themselves.

Hallaj was dismembered in Baghdad [in 922 CE] for blasphemy. . . . Suhrawardi was killed in 1191, the charge including "atheism, heresy, and believing in ancient philosophers." Ibn El Arabi of Spain was hauled before an inquisition of scholars in the twelfth century, for immodesty in pretending that love poetry could be spiritual, when it was pornographic. Sarmad was executed in India in 1563 for exposing his body; he was alleged to be a Jew or of Jewish origin. Jalaluddin Rumi was accused of publishing trivial folktales in the guise of spiritual writings.

. . . The charges are always the same. The academic scholars persecute, claim apostasy, ignorance, dubious parentage, desire for power over the people, danger to public order, self-advertisement and the circulation of spurious, superficial, or irresponsible literature. But in spite of these accusations, in spite of persecution often followed by judicial murder, the Sufi teachers subsequently became major spiritual authorities to the Islamic world. Most of these Sufis were literary men, and all were marked by their inability to accept the dogmas of their current "establishments." Once safely dead, they could be unofficially canonised, but during their lifetimes many suffered grievously.

But perhaps this treatment was not surprising: people persecute or ignore what they do not understand. And there was something particularly provoking about the Sufis. What, for instance, could a medieval theologian make of a man who called himself a mystic, was interested in [humanity's] evolution to a higher level, was associated with scientific work?

it is against this sort of historical background that it can be useful to view Sufi literature, which exists on many levels, from simple entertainment to truths that "lie under the poet's tongue." Codes and the cryptic had their practical, as well as their spiritual uses.

. . . Sufism believes itself to be the substance of that current which can develop [a person] to a higher state in [his/her] evolution. It is not contemptuous of the world. "Be in the world, but not of it," is the aim.

But the inability to believe in the combination of the mystic and the practical is not only of our time.

Roger Bacon, the Franciscan monk, lectured at Oxford from Sufi books in the thirteenth century: it was for his recommendation of Sufi practices that he got into trouble with his religious authorities. Lully of Majorca praised Sufi methodologies, was "a devotee of Arabian mysticism" (Professor E, W. F. Tomlin). Today he finds a place in scientific literature as the inventor of a digital computer. Rumi, poet and mystic, stressed a theory of evolution eight hundred years before Darwin. Shabistari, a thirteenth-century Persian Sufi, writes of the mystic way while emphasising the unbelievable power which could be released from the atom. Al Ghazali wrote of the collective unconscious in relation to medical and psychological techniques. Hujwiri of India, at the time of the Norman Conquest of England, was writing (in a book about Sufi saints) that time and space are identical. Jar Sadiq and Jabir (Geber), the fathers of Western chemistry, were Sufis. Baba Farid had commercial interests and Rumi had to defend him for it – as probably would have to be done today.

For claiming that human enlightenment must be achieved by working with the material world, innumerable Sufis were isolated from potential well-wishers, because of the inculcated thought that they must be superficial if they lived ordinary lives and were concerned with the practical welfare of [humanity]. It is to be hoped that this ancient bias will not be strong enough to keep people's minds closed against what Sufism is offering now. 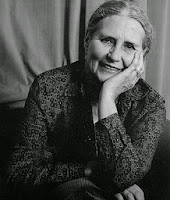 See also the previous Wild Reed posts:
• My Travels with Doris
• The Sufi Way
• In the Garden of Spirituality – Doris Lessing
• Sufism: The Call to Awaken
• Doris Lessing Awarded Nobel Prize for Literature
• Doris Lessing and the Challenge to Go Beyond Ideological Slogans
• As the Last Walls Dissolve . . . Everything is Possible
• Clarity, Hope, and Courage
• Remembering Doris Lessing, 1919-2013