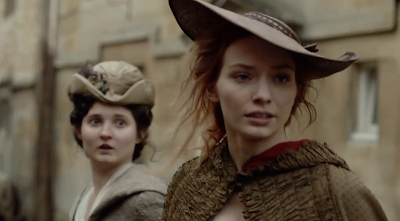 Above: Ruby Bentall (left) as Verity and Eleanor Tomlinson as Demelza
in the forthcoming BBC One adaptation of the Poldark novels. 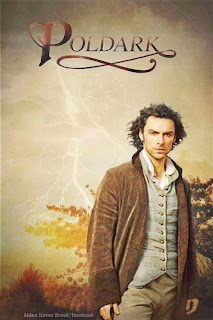 Regular readers of this blog may recall that I've previously shared a number of posts featuring excerpts from Winston Graham's Poldark novels. One particular series of Poldark-related posts starts here and focuses on the character of Verity. (For a more general introduction to the Poldark novels and my interest in them, click here.)

Left: The renegade returns! Aidan Turner as Ross Poldark in the BBC's new adaptation of Winston Graham's acclaimed series of historical fiction. For more about this adaptation, scheduled for broadcast in March 2015, click here. To view a trailer of the series, click here.

Today's post continues Verity's story. But first, a brief recap: Verity Poldark, cousin of Ross Poldark, the main character in the saga, has had her romance with Captain James Blamey quashed by her overbearing father and brother. Captain Blamey has returned to his lonely seafaring life and Verity has resigned herself to a life of loss and loneliness. Two years have passed, and Ross' young wife, Demelza, who has become good friends with Verity, decides to intervene, secretly journeying to Falmouth to see Captain Blamey. Their meeting does not go well. Several weeks later, however, when out walking near her home, Demelza is startled by the appearance of Captain Blamey. She agrees to arrange a seemingly random meeting between him and Verity in Truro. She later writes to him with details, informing him that on Thursday, October 20, "in the forenoon," she and Verity will be at Mistress Trelask's silk mercer shop in Kenwen Street.

On the agreed upon day, Demelza takes Verity shopping in Truro, but at the designated time and place, Captain Blamey fails to appear. Yet in the narrow street outside Mistress Trelask's the fateful reunion does indeed take place – just as a large group of angry miners, close to rioting over the unfair price of corn, descend upon Truro. I'll let the incomparable Winston Graham take it from this point by sharing the following excerpt from Demelza: A Novel of Cornwall, 1788-1790.

"Miss Verity," said a voice behind them.

Oh, God, thought Demelza, it has come at last.

Verity turned. Riding and shopping brought a delicate flush to her cheeks which they normally lacked. But as she looked into Andrew Blamey's eyes the colour drained away: from her forehead, her lips, her neck, and only her eyes showed their blue greyness in a dead-white face.

"Miss Verity, ma'am." Blamey glanced for a second at Demelza. His own eyes were a deeper blue, as if the ice had melted. "For years I dared to hope, but no chance came my way. Lately I had begun to lose the belief that someday . . ."

"Captain Blamey," said Verity in a voice that was miles away, "may I introduce you to my cousin, Mistress Demelza Poldark, Ross's wife."

"You are shopping?" Blamey said. "Have you engagements for an hour? It would give me more pleasure than I can express . . ."

Demelza saw the life slowly creeping back into Verity's face. And with it came all the reservations of the later years.

"I don't think," she said, "that any good can come of our meeting, Captain Blamey. There is no ill thought for you in my heart . . . But after all this time we are better to renew nothing, to assume nothing, to – to see nothing. . . ."

"That," said Andrew, "is what I passionately challenge. This meeting is most happy. It brings me the hope of – at least a friendship where hope had – gone out. If you will –"

Verity shook her head. "It's over, Andrew. We faced that years ago. Forgive me, but there is much we have to do this morning. We will wish you good day."

She moved to go on, but Demelza did not stir. "Pray don't consider me, Cousin. I can do the shopping on my own, truly I can. If – if your friend want a word with you, it is only polite to grant it."

"No, you must come too, mistress," said the seaman, "or it would be talked of. Verity, I have a private room as it happens at an inn. We could go there, take coffee or a cordial. For old times' sake. . . ."

Verity wrenched her arm away from Demelza. "No," she said hysterically, "No! I say no."

She turned and began to walk quickly down the street towards the West Bridge. Demelza glanced frantically at Blamey, then followed. She was furious with Verity, but as she caught up with her and again took her arm, slowing her footsteps, she realized that Andrew Blamey had been prepared for this meeting while Verity had not. Verity's feelings were just the same as Blamey's had been that morning she went to Falmouth, a shying away from an old wound, a sharp-reared hostility to prevent more hurt. She blamed herself for not warning Verity. But how could she have done that when Verity --

Coming to her ears were all sorts of noises and shouts, and in her present upset and confused state she came to link them with Blamey.

"You've left him far behind," she said. "There's no hurry now. Oh, Verity, it would ha' been fine if you'd given him a hearing. Really it would."

Verity kept her face averted. She felt stifled with tears, they were in her throat, everywhere but her eyes, which were quite dry. She had almost reached the West Bridge and tried to push her way towards it, but found herself blocked by a great number of people who seemed to be talking and staring up the way she had come. Demelza too was holding her back.

It was the miners, Demelza saw now. By the West Bridge there was a centre block of ancient houses with narrow streets like a collar about them, and in this roundabout the miners who had come down the River Street were milling, jostling each other, packed tight together, shouting and shaking their weapons. They had lost direction, being set for the Coinagehall, but this junction of streets and alleys had confused them. Half a dozen of their number and several ordinary people had been pushed into the stream by the pressure from behind, and others were fighting in the mud to avoid following; the old stone bridge was packed with people struggling to get across it. Demelza and Verity were on the very edge of the maelstrom, twigs circling the outer currents and likely at any time to be drawn in. Then Demelza glanced behind her and saw people, miners, grey and dusty and angry, coming in a mass down Kenwyn Street. They were caught between two floods.

"In here," said a voice, and her arm was grasped. Andrew Blamey pulled them across the street to the porch of a house. It was tiny, it would just hold the three of them, but they might be safe.

Verity, half resisting, went with them.

For other previous Poldark-related posts, see:
• Passion, Time and Tide
• Time and Remembrance in the Poldark Novels
• A "Useful Marriage" for Morwenna
• Cornwall's – and Winston Graham's – Angry Tide
• A Sea Dragon of an Emotion . . . "Causing Half the Trouble of the World, and Half the Joy"
• Into the Greenwood
• "I Want You to Become a Part of Me – Each to Become a Part of the Other"
• Return of the (Cornish) Native