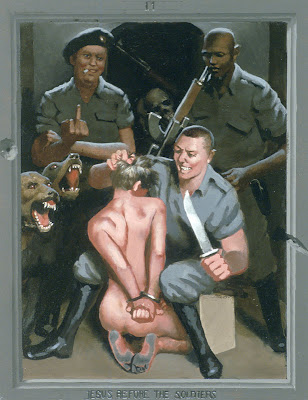 “Jesus Before the Soldiers” by Doug Blanchard.

Jesus, our Tortured Brother,
In this world, so many are
forced to walk your path today —
the suffering and pain, the
humiliation, sense of betrayal
and abandonment,
for those with power, the
Romans of today, continue to
condemn others to modern crosses.

You said that what was done to the least of these
was done to you and so each day,
You are tortured anew.

Jesus, Guiding Spirit,
Teach us to be in solidarity with those who hang
from these crosses,
Call out to those who torture,
“Know the evil you have done and repent.”
Call out to the rest of us, “What meaning does love have
if you allow torture to continue unopposed?”

TAKE ACTION! To petition the Obama administration to prosecute, to the full extent of the law, all of the parties responsible for the use of torture as outlined in the Senate's report on CIA torture, click here.

About Dianna Ortiz, author of "Jesus, Our Tortured Brother Today": Sister Dianna Ortiz is a U.S Roman Catholic nun of the Ursuline order. While serving as a missionary in Guatemala in 1989, she was abducted by U.S.-backed right-wing forces and brutally tortured. Sister Ortiz chronicled her experience and recovery in her book (co-written with Patricia Davis) The Blindfold’s Eyes: My Journey from Torture to Truth. (For Salon's review, click here.)

In early 1995 Sister Ortiz won $5 million in a U.S. civil court case against the former Minister of Defense of Guatemala — General Héctor Gramajo. In its ruling, the judiciary stated that “[Gramajo-Morales]...was aware of and supported widespread acts of brutality committed under his command resulting in thousands of civilian deaths. . . .” and further noted that Gramajo-Morales “devised . . . [and] directed . . . [an] indiscriminate campaign of terror against civilians.” Five years after bringing her U.S. Civil Suit against Gramajo-Morales, Sister Ortiz won a judgment against the State of Guatemala through the Inter American Court of Human Rights where she specified that Gen. Gramajo “made several [official] statements to the effect that Sister Ortiz’s injuries did not occur or were self-inflicted.”

Sister Ortiz is founder of the Torture Abolition and Survivors Support Coalition International (TASSC), the only organization in the United States founded by and for survivors of torture. TASSC’s current policy campaign is dedicated to repealing the Military Commissions Act of 2006, what the survivors of torture at TASSC call the US Torture Law.


About Doug Blanchard's "Jesus Before the Soldiers": This powerful work of art is part of Blanchard's The Passion of Christ: A Gay Vision, a series of 24 panels that, as Kittredge Cherry notes, depicts Jesus as a "contemporary gay man in a modern city as he lives out the dramatic events of Palm Sunday, the Last Supper, and his arrest, trial, crucifixion and resurrection."

To view other panels from the series, click here.

For information about the book version of The Passion of Christ: A Gay Vision, click here.

See also the previous Wild Reed posts:
• Something to Think About – December 11, 2014
• Catholics and Torture
• Saying "No" to Torture and the Republican Agenda
• Praying for George W. Bush
• The Passion of Christ (Part 6): Jesus Before the Soldiers

This same painting has been on my mind as I absorbed the latest news about the CIA torture. As I wrote in the book about Doug’s Passion series, “The trauma endured by Blanchard’s contemporary Christ is not an isolated incident, but a theme that recurs in human history and perhaps the human heart. With this image, all victims become one with Christ and receive a chance for compassionate attention from the viewer.”

Your readers may be interested to know that the book version of “The Passion of Christ: A Gay Vision” was published recently. The book’s new website provides an easy way to view all the images:

Thanks so much, Kitt, for sharing your wise words and for providing the link to the book version of "The Passion of Christ: A Gay Vision." I'll be sure to add it to the body of this post.