Reclaiming the "Hour of God" 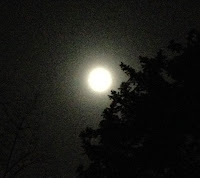 The winter solstice occurs this evening, making it an ideal time to share the following excerpt from Clark Strand's recent New York Times op-ed "Bring on the Dark." It's an insightful and beautiful piece celebrating the "deeper darkness" of the night, which before the development of artificial light, was known as "God's hour."

In centuries past, the hours of darkness were a time when no productive work could be done. Which is to say, at night the human impulse to remake the world in our own image — so that it served us, so that we could almost believe the world and its resources existed for us alone — was suspended. The night was the natural corrective to that most persistent of all illusions: that human progress is the reason for the world.

Advances in science, industry, medicine and nearly every other area of human enterprise resulted from the influx of [artificial] light. The only casualty was darkness, a thing of seemingly little value. But that was only because we had forgotten what darkness was for. In times past people took to their beds at nightfall, but not merely to sleep. They touched one another, told stories and, with so much night to work with, woke in the middle of it to a darkness so luxurious it teased visions from the mind and divine visitations that helped to guide their course through life. Now that deeper darkness has turned against us. The hour of the wolf we call it — that predatory insomnia that makes billions for big pharma. It was once the hour of God.

There is, of course, no need to fear the dark, much less prevail over it. Not that we could. Look up in the sky on a starry night, if you can still find one, and you will see that there is a lot of darkness in the universe. There is so much of it, in fact, that it simply has to be the foundation of all that is. The stars are an anomaly in the face of it, the planets an accident. Is it evil or indifferent? I don’t think so. Our lives begin in the womb and end in the tomb. It’s dark on either side.

We’ve rolled back the night so far that soon we will come full circle and reach the dawn of the following day. And where will that leave us? In a world with no God and no wolf either — only unrelenting commerce and consumption, information and media . . . and light. We need a rest from ourselves that only a night like the winter solstice can give us. And the earth, too, needs that rest. The only thing I can hope for is that, if we won’t come to our senses and search for the darkness, on nights like these, the darkness will come looking for us.

– Clark Strand
Excerpted from "Bring On the Dark: Why We Need the Winter Solstice"
The New York Times
December 19, 2014

See also the previous Wild Reed posts:
• Dark Matter: "An Intriguing Aspect of the Universe"
• Mystics Full of God
• In the Garden of Spirituality – Caroline Jones
• The Christmas Tree as Icon, Inviting Us to Contemplate the "One Holy Circle" of Both Dark and Light
• Christmastide Approaches
• "A Dark Timelessness and Stillness Surrounds Her Wild Abandonment"
• Dark Matters