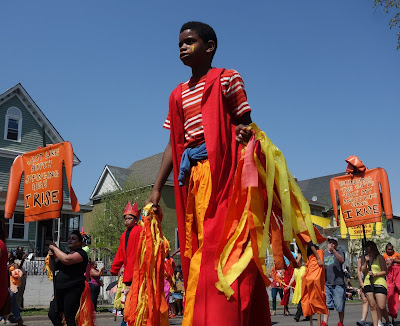 Before the month of May ends, I want to share a second batch of photos from this year's MayDay parade.

As I mentioned in Part I, on Sunday, May 3, 2015, my friends Tim and Raul and I attended the 41st annual In the Heart of the Beast Theatre's MayDay parade in south Minneapolis. This year's theme was "And Still We Rise," and was inspired by Maya Angelou's poem, "Still I Rise," and by the local and national work of the Black Lives Matter movement.

The text that accompanies my photos is excerpted from the MayDay 2015 program guide. Enjoy! 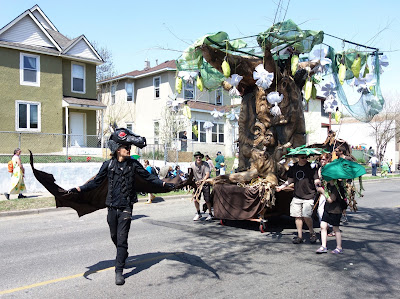 We honor our deep roots in Grandmother Africa with a giant Baobab tree, aptly named as the African "Tree of Life" because its parts are extremely useful. The fruits, seeds, bark and leaves provide nutritious sustenance to people and many other species on the giant continent – ancient home to the entire human race. Here we discover many diverse beings intertwined in the roots, truck and branches: birds, insects, fish and animals with radical interdependence in the universal tradition.

Humans of all ages and backgrounds dance as tree guardian spirits. Some are tangibly connected to the roots, spinning the tree and calling for wisdom and energy to honor and preserve original natural beauty, goodness and wildness. 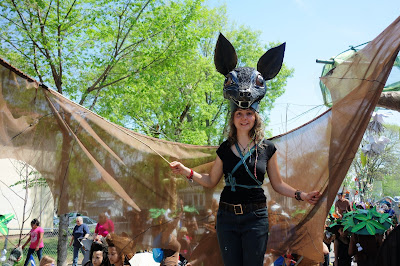 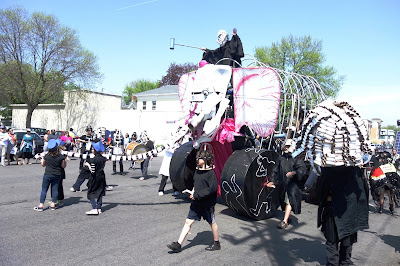 "Elephant in the Room" embodies the overpowering evidence of racism and its sinister reality, unacknowledged, as it inhales money and life. 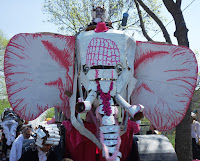 The bright pink front abounds with colored bubbles, an insidious Happiness Machine projecting "Everything is OK." It represents the construct that continues to benefit the larger legal, penal and industrial systems of racism in our United States. 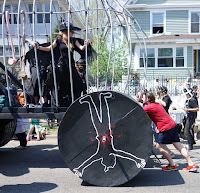 The elephant's structure is a cage of incarceration with an extreme bias against people of color and particularly those who identify, or who are identified, as black. The crushing feet of this beast is given characteristics of the police, too often the instruments of this machine's most vivid trespass – taking black lives. The wheels of this monstrosity grind with a statistical predictability toward the next sacrifice with etched outline of the fallen, or those that will fall, on each wheel. Carried away by the beast, justice goes backward as "Injustices" direct its movement with gravels. Around the elephant are the personal cages that obscure and confine us in this reality.

Confined in bird cage masks, participants alternate between day-to-day actions and a lockstep march of compliance. The few who express awareness become targets for the "Elephant in the room" and the "Injustices" who receive money from the backside of this beast. 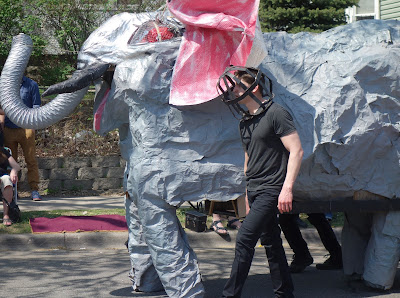 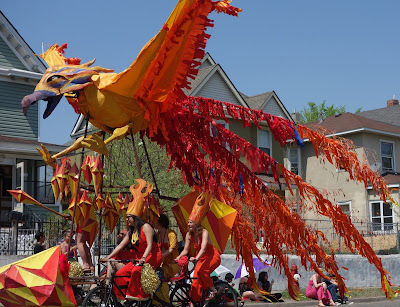 We work to free ourselves from the subtle and overt ways in which racism has a hold over us all. We celebrate those who have fought before us. We are ignited alongside the protesters of Ferguson and the Black Lives Matter movement.

We rise with alarm, with purpose, with certainty. Our bodies pulse with internal fire -- our breath joining and powering a collective call for our transformative energy to build a just world. 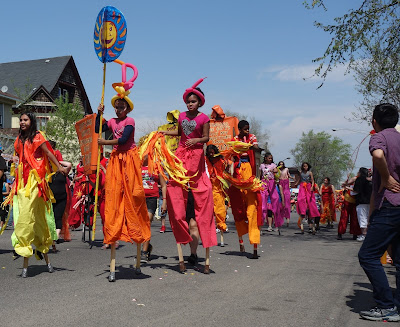 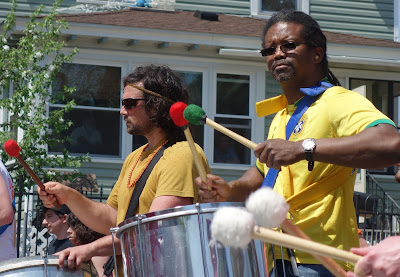 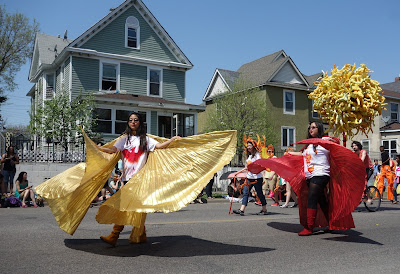 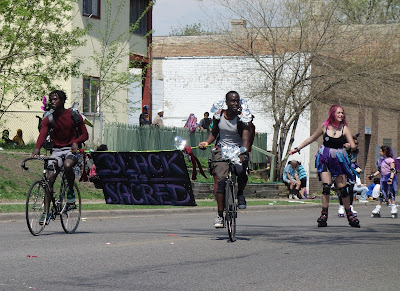 We are arriving to a world where everyone is living and working in the bliss of their purpose. Where we can recline in the park, with no fear, just Black folks' hearts opened and shining at the sky. And at ease. Our thoughts can ramble, and we just ponder the way bugs move through the grass. All people have big smiles and are flying kites. The elders are hunched down in gardens smelling sweet roses with baskets full of veggies all around. Or they recline in hammocks, while sipping on sun-brewed, raw honey sweetened chamomile tea out of glass jars. All bodies are sacred, joyous, loved, safe, and sensual. We are slow dancing to the sound of wind chimes and standing in the sun. All children learn to trust and blossom their truths and dance in the warm rain of self-love. 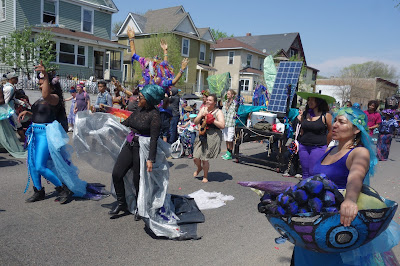 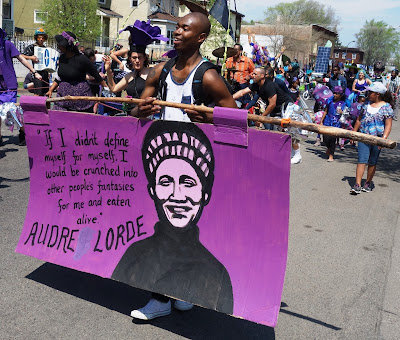 Parade Story, Section 5: And Still We Rise: Sprout of Life 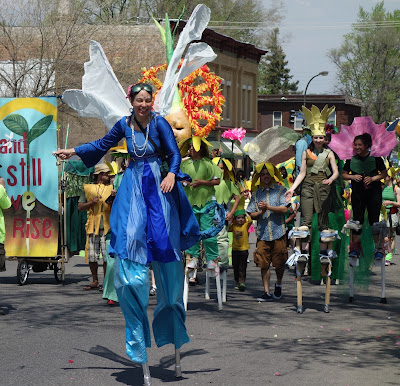 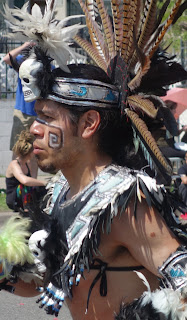 When the invisible forces of life that orchestrate matter reconnects with the circle of life: Life sprouts.

We can experience the strengthening of life, through joy.

We can experience freedom in its most pristine time.

Inspired and strengthened by the joy, we become the new blood which travels THROUGH the circle of life. 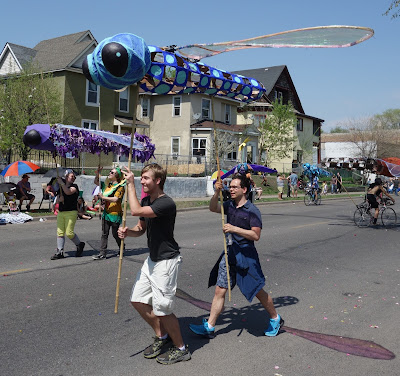 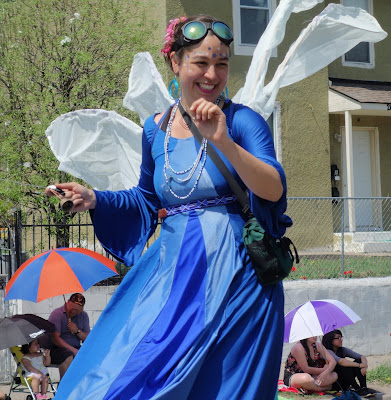 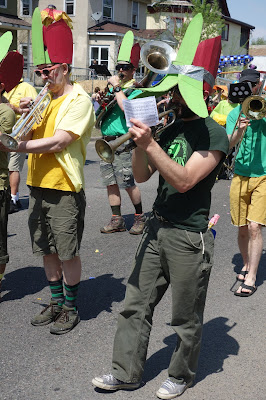 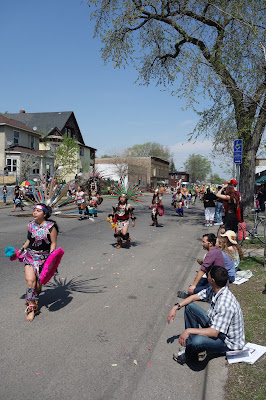 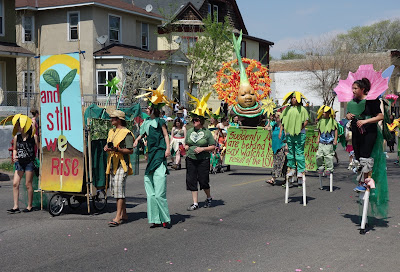 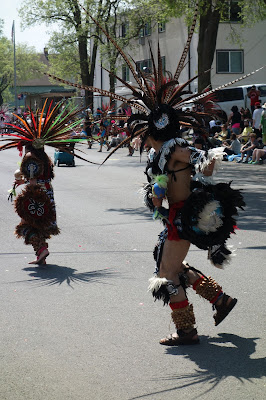