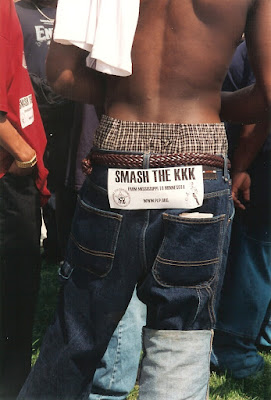 Remembering the time Minnesotans united
to say 'No' to racism and the Ku Klux Klan. 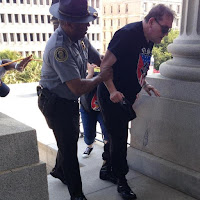 I'm sure you've seen Rob Godfrey's powerful photo at left. It shows black police officer Leroy Smith helping an unidentified Ku Klux Klan supporter out of the sun during a recent white supremacist rally at the South Carolina Statehouse. The image has gone viral on social media, with The Huffington Post's Dominique Mosbergen noting that Smith is being praised for his "extraordinary show of professionalism and grace under trying circumstances."

The KKK is infamous for its hateful and violent words and actions against blacks, Jews, immigrants, Catholics, gays and lesbians, and people of color. Wikipedia notes that the Ku Klux Klan, or simply "the Klan," is the name of "three distinct past and present movements in the United States, which have advocated extremist reactionary currents such as white supremacy, white nationalism, and anti-immigration, historically expressed through terrorism." The current manifestation of the Klan is classified as a hate group by the Anti-Defamation League and the Southern Poverty Law Center. In 2012 the KKK was estimated to have between 5,000 and 8,000 members.

In August 2001, members of the Ku Klux Klan held a rally on the steps of the Minnesota State Capitol, and I joined with over 1,000 people to protest and counter their message of hate and intolerance.

In the lead-up to the Klan's rally, Thelma McKenzie, president of the League of Minnesota Human Rights Commissions, attempted to put a positive spin on the KKK's presence in Minnesota.

"I think it's good the Klan is going to have their rally," she told Minnesota Public Radio. "It tells us they're still there and it awakens us to deal with it."

McKenzie also said that news of the planned Klan rally had brought people of diverse racial backgrounds together - something which, she said, was bound to disturb members of the white separatist group.

Yet not everyone was in agreement on how best to display rejection of the Klan and its rally on the steps on the Minnesota Capitol on August 25, 2001. The city of St. Paul opted to hold an anti-racism event at Central High School at the same time the Klan demonstrated at the Capitol, while the Minnesota DFL Party said it would host a rally at the Fitzgerald Theater in downtown St. Paul.

I chose to respond to the Klan's rally by getting involved with a coalition called "Can the Klan," which organized a demonstration at the capitol during the Klan's rally. 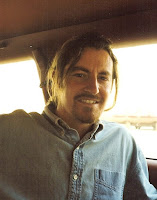 At the time I was the founder and lead organizer of an activist group called Queers United for Radical Action (QURA). The members of QURA (and, truth be told, there were never more that a dozen or so of us) described the group as a "network of LGBT activists dedicated to educating ourselves and the wider LGBT community on the threats to democracy, human life, and the environment posed by the nexus of corporate globalization, militarism, and environmental degradation." We also sought to "organize and participate in educational and non-violent direct action events in order to facilitate positive and radical social and economic change, and to facilitate and share a uniquely queer spirit of resistance to all forms of oppression."

Below is the flyer I designed and which QURA distributed in the lead-up to the "Can the Klan" rally in St. Paul on August 25, 2001. 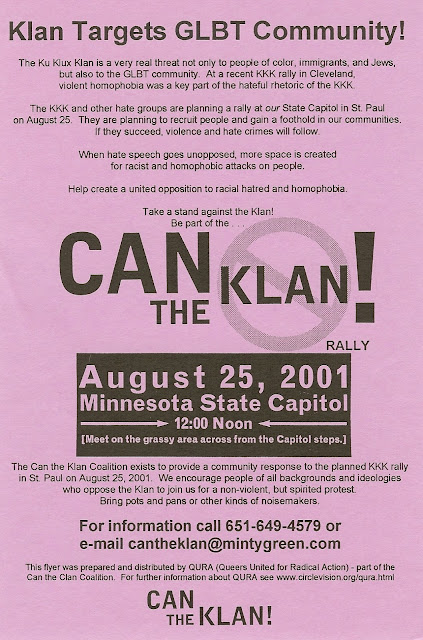 Following is an excerpt from an August 25, 2001 Minnesota Public Radio News article about the Klan's presence at the Minnesota Capitol and the "Can the Klan" counter demonstration.

Forty-six men dressed in hooded, white robes or brown shirts with swastika arm bands stood defiantly on the steps of the state Capitol waving Nazi and Confederate flags. The members of the National Knights of the Ku Klux Klan took turns blasting various racial groups and calling for a pure white race. Michael McQueeny, a grand dragon of the KKK from Wisconsin and the rally organizer, set the tone of intolerance.

"How long can the white race continue to deny and attempt to cover up the fact that the world we live in resembles a horror film? Every day crime in America is getting worse, and vicious crimes by Negroes are so common that most people have become immune to the crime that exists around them," McQueeny said.

McQueeny and others shouted through a bullhorn and public address system, but the chants of an estimated 1,200 anti-Klan demonstrators prevented most observers from hearing the speeches. . . . Klan organizers billed the rally as a recruiting event. They actually had no opportunity for contact with anyone who might have come to hear their pitch, but they did hold banners displaying their organizations' phone numbers.

. . . About 75 state troopers stood between the Klan and their opponents. Many more police stood by away from the demonstration. The Department of Public Safety says four demonstrators were arrested and one person was treated for dehydration. A few eggs were thrown, but no one was injured.

After the rally, anti-Klan protesters were declaring victory. Spokesman Mike Huber of the group "Can the Klan" says more people than expected participated in opposing the KKK and its racist agenda.

"The turnout showed people are willing to come and stand up. Even some people have been speaking publically saying that this was going to be a violent demonstration. I think we proved that it wasn't and people weren't going to be scared by those scare tactics," said Huber.

Huber says Can the Klan is planning to hold ongoing public meetings to discuss racism. He says they will be better organized the next time a group like the KKK comes to town. 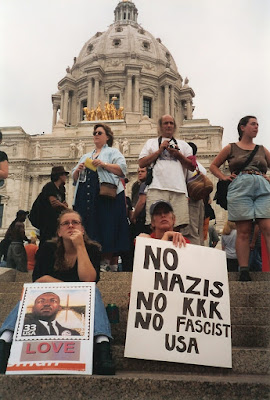 Above and below: Images I captured during the August 25, 2001 "Can the Klan" rally at the Minnesota State Capitol. 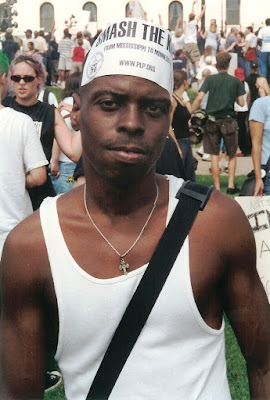 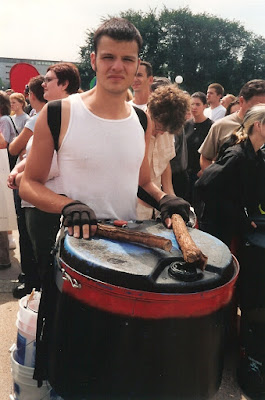 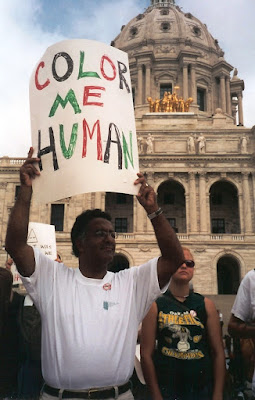 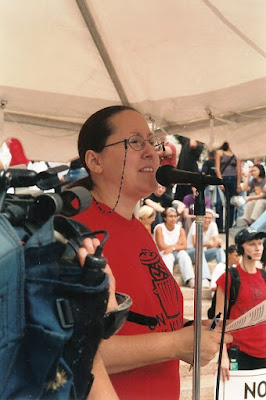 Above: Michelle Gross of Communities United Against Police Brutality was one of several speakers at the "Can the Klan" rally.

Wrote Kim DeFranco in her August 29, 2001 Fight Back News article, "Minnesota Says: "Can the Klan, Say No to Racism!":

Before the white supremacists came out, the Can the Klan rally started with Michelle Gross, one of the organizers stating, "They are here to recruit and gain a foothold in Minnesota. We can't hand over anybody to the Klan. It's important for everyone who is against the them to come out and speak out against them."

Amid speeches, music, drumming and chants, demonstrators prepared for the Klan's arrival. The crowd was diverse and multinational, as different communities around the Minneapolis-St. Paul area came to express their anger.

People held signs: "No to Racism! No to Klan!" "This is not a time for silence - speak out against racism now!" and "When I was in school, we called it a 'dunce cap'! Hate is stupid!" 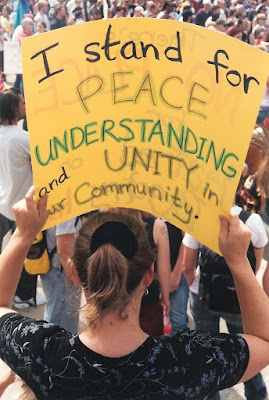 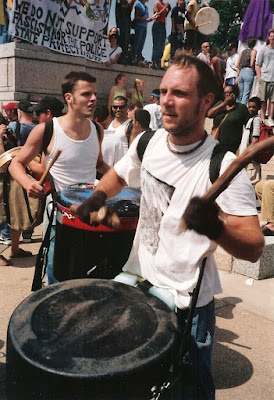 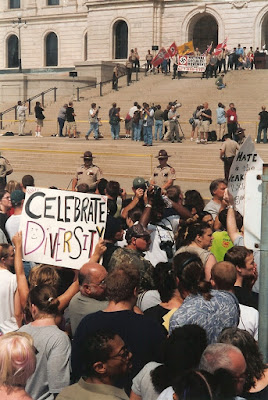 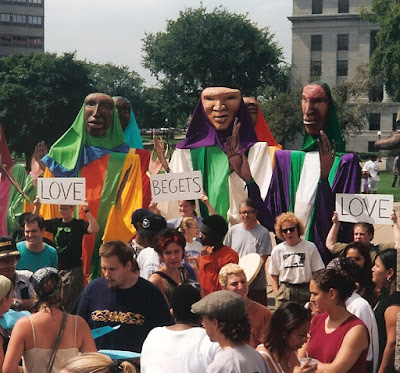