The (Same-Love) Dance Goes On 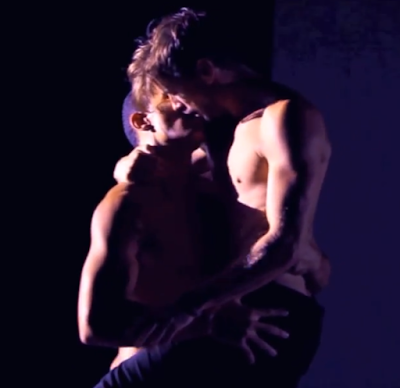 The title of this post comes from the fact that even as we celebrate recent marriage equality victories (see, for instance, here and here), much of what the Full Frontal Freedom dance group said in 2013 about the ongoing struggle for justice remains as true and important today as it did two years ago.

We were so grateful that Mackelmore and Lewis took a stand and loudly cheered for marriage equality. But, our work as a community is far from done. . . . This song – which honors our movement's struggle – is so compelling that we thought it a fitting tribute to express our emotions in movement as a contemporary dance.

Oh, and one last thing: Despite what the dance troupe's name may imply, there is no "full frontal" nudity in the video below.

Related Off-site Link:
The Challenges That Remain After Marriage Equality – The Editorial Board (The New York Times, July 29, 2015).

For previous installments in the 2015 Wild Reed Queer Appreciation series, see:
• Vittorio Lingiardi on the Limits of the Hetero/Homo Dichotomy
• Reclaiming and Re-Queering Pride
• Standing with Jennicet Gutiérrez, "the Mother of Our Newest Stonewall Movement"
• Questions for Archbishop Kurtz re. the U.S. Bishops' Response to the Supreme Court's Marriage Equality Ruling
• Clyde Hall: "All Gay People, in One Form or Another, Have Something to Give to This World, Something Rich and Very Wonderful"

For other Wild Reed dance-related posts, see:
• A Beautiful Collaboration
• The Dancer and the Dance
• The Soul of a Dancer
• Five Takes on Five Dances
• Gay Men and Modern Dance
• Recovering the Queer Artistic Heritage