LGBT Catholics to Pope Francis: Let Us "Work Together Towards Creating a Church Where All Families Know That We Are Truly Loved and Welcomed" 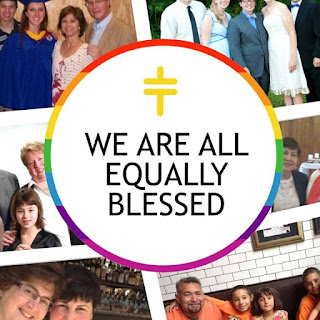 The U.S.-based LGBT Catholic coalition Equally Blessed has written to Pope Francis, requesting a meeting with him during his September visit to Philadelphia for the World Meeting of Families.

In a formal letter sent to Pope Francis at the Vatican, groups representing gay and transgender people, Catholics, and Hispanics said the church in America was in the midst of a “pastoral crisis” over gay issues and asked to meet with him while he was in the United States. While some American conservatives are eager to see Pope Francis make use of his popularity on this trip to advance the fight against abortion and same-sex marriage, gay Catholics want him to acknowledge their rejection by the church, and to welcome them as full members with equal access to sacraments like baptism and marriage.

“We see so many people we love abandoning the church because of the kinds of indignities and pain that they’re subjected to,” said Marianne Duddy-Burke, executive director of DignityUSA, who signed the letter requesting a meeting with the pope, “whether it’s being denied a kid’s baptism or hearing a priest make horrible comments during a homily. Everybody’s got stories of pain and alienation, and those things do real harm to people. And it needs to end.”

Pope Francis and the church in the United States are both struggling to navigate a new era. Despite years of opposition from various religious groups, same-sex marriage is legal in all 50 states. Polls show that six out of 10 American Catholics are in support. And while American bishops are pressing for what are billed as religious freedom laws that would protect the rights of those who object to serving gay people getting married, Catholic institutions, and parishioners, are far from unified.

While some parishes welcome same-sex couples and march in gay pride parades, some priests in other parishes refuse to baptize the children of same-sex couples or to give communion to openly gay mourners at their parents’ funeral Masses. Dozens of Catholic schools have fired openly gay teachers — most recently a priest working at Seton Hall University in New Jersey and a director of religious education in a private academy outside Philadelphia — only to face revolts from Catholic students and parents.

With gay Catholics clamoring to be heard, and the pope expected to address a crowd of more than one million in downtown Philadelphia to close a landmark Catholic event on family life called the “World Meeting of Families,” the stage for a reckoning is set.

Following is the complete text of the letter sent to Pope Francis by the Equally Blessed coalition and signed by Marianne Duddy-Burke, Executive Director of DignityUSA and Sarah Kate Ellis, President and CEO of GLAAD.

Like millions of others, we are eagerly anticipating your Pastoral Visit to the United States.

Some of us will be among the crowds that will greet you in person. All of us will be following your travels and praying that this visit helps bring better unity to the Body of Christ.

We are writing to request that you meet with lesbian, gay, bisexual, and transgender (LGBT) Catholics and their family members during your visit.

Some of us write as Catholics, or as leaders of Catholic organizations, and others on behalf of the many Catholics among our constituents. We know that your schedule is very busy, but this is a compelling pastoral need, and would promote great healing and reconciliation in our Church and society.

Many LGBT people and family members have experienced a resurgence of hope for full acceptance in our Church as a result of your words and reports of personal meetings with LGBT people.

We see your visit to the U.S. as an opportunity for you to hear from us how central our faith is to our lives, and to work together towards creating a Church where all families know that we are truly loved and welcomed.

Currently, our Church’s teaching and pastoral practices surrounding LGBT people are causing an enormous pastoral crisis, as well as upholding systemic, institutionalized discrimination against LGBT people and our families.

In the U.S. and around the world, we are experiencing alienation from the Church, higher rates of poverty and violence, and discrimination in employment, housing,educational opportunities, and access to health care.

LGBT youth are particularly vulnerable, with nearly half of the LGBT young people in the U.S. considered to be at-risk. Lacking support at home, at school, or from faith communities, LGBT youth suffer bullying, experience depression, self-mutilate, attempt suicide, use drugs, become homeless or enter foster care at rates far higher than non-LGBT youth.

This is a crisis that the church can help to address through effective pastoral care and programs that provides love and support for these youth.

In the U.S. we have seen strong support of LGBT issues among all Catholics, including rapidly rising support among Latinos as greater numbers of Latino LGBT people come out. Latino Catholics have felt new support, which is reverberating into their large circles of families and friends.

According to the Public Religion Research Institute, "about six in ten white (61 percent), Hispanic (60 percent), and other non-white Catholics (60 percent) support allowing gay and lesbian couples to marry legally."

At times, these Catholic families feel unwelcome in our Church, as they fear or experience condemnation of themselves or their loved ones. This is something that pains us all.

All of these concerns are important to us as Catholics, and we know they are important to you. We ask that you meet with representatives of the LGBT Catholic community and our family members to hear our stories of perseverance, hope, and struggle. We believe your personal attention to our concerns could help hasten greater justice, in the U.S. and across the globe.

We are happy to meet at a time most convenient to you. Please contact us at Coordinator@equallyblessed.org or 617-669-7810 so that we can work out the logistics.

Be assured of our prayers for your ongoing leadership and service.

See also the previous Wild Reed posts:
• LGBT Catholics Celebrate Being "Wonderfully Made"
• The Raising of Lazarus and the Gay Experience of Coming Out
• Celebrating Our Sanctifying Truth
• "The Church is Better Because of the Presence of LGBT People"
• Celebrating the Presence of God Within All Families
• Progressive Catholic Perspectives on the U.S. Supreme Court's 2015 Marriage Equality Ruling
• Progressive Thoughts on Recent Developments in Ireland, El Salvador and the U.S.
• More Progressive Catholic Perspectives on Ireland's Historic Gay Marriage Vote
• LGBT Catholics Respond to Synod 2014's Final Report
• Beyond the Hierarchy: The Blossoming of Liberating Catholic Insights on Sexuality
• The Many Manifestations of God's Loving Embrace
• Knowing What to Do, Knowing Why to Stay