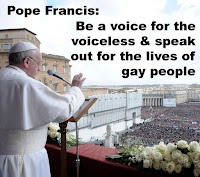 Yesterday I shared the inspiring and hopeful story of Danny and Aamer, two gay Syrian men who found refuge in Canada from the potentially deadly homophobia of their homeland.

In highlighting their journey I noted that there are many parts of the world where, sadly, it's still very difficult and dangerous for lesbian, gay, bisexual, transgender, queer and intersex (LGBTQI) people to simply be themselves in the totality of their being, a being that includes, of course, their sexuality.

One such part of the world is Africa, where Pope Francis is currently visiting. Specifically, the pope is visiting Uganda, Kenya, and the Central African Republic. In all three countries homosexuality is culturally disapproved, and, in the first two, it remains illegal. 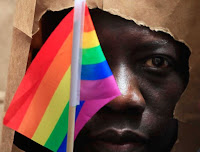 The inspiring folks at New Ways Ministry are using the opportunity afforded by the Pope's visit to Africa to relaunch its #PopeSpeakOut campaign, one that encourages Catholics to ask the Pope to speak out for the lives of LGBTQI people and to publicly oppose the criminalization of, discrimination towards, and violence against LGBT communities.

Following is how New Ways Ministry's Bob Shine describes the campaign in a recent Bondings 2.0 post.

#PopeSpeakOut was initially launched in 2014, following Pope Francis’ appeal for solidarity in his World Day of Peace message, to save LGBT lives. This campaign uses Twitter to send messages (tweets) to the pope (his Twitter handle: @pontifex) to speak out for LGBT human rights. More information on how to send tweets and other electronic messages, with samples of what to say, can be found by clicking here.

Pope Francis’ voice and moral authority on a global level have only grown in the time since. A clear condemnation of social and legal structures which harm LGBT people across the world and especially in Uganda and Kenya which criminalize homosexual people, would send a clear message that the Catholic Church truly does not approve of or tolerate discrimination and violence against sexual and gender diverse minorities. The pope should affirm the following:

• Catholic teaching does not support the criminalization of sexual orientation/gender identity and all such laws should be repealed;

• Each and every instance of discrimination and violence against LGBTQI people is morally wrong and should be opposed vigorously;

• Western nations are not withholding foreign aid based on a recipient nation’s recognition of same-sex relationships, despite what the Synod on the Family’s final report claims.

Already, a multilingual petition has generated 100,000 signatures asking Pope Francis to condemn homophobia and transphobia. You can sign it at Change.org by clicking here.

Despite the dangers that being openly gay or lesbian entails in Uganda, and despite rumors that this nation’s Parliament is considering new legislation to stifle human rights work, a Pride celebration went on as planned there this summer. You can view images of it here. 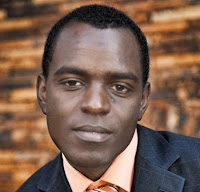 Despite the bleak picture, there are some signs of progress , too. A Ugandan presidential candidate, while clearly opposing same-sex marriage, did attack homophobia as wrong earlier this year. Advocates like Dr. Frank Mugisha [right], a Catholic who is executive director of Sexual Minorities Uganda whose work you can read about in a Pink News article, are continuing to seek justice and equality. International allies must add our voices to these efforts by encouraging Pope Francis’ to speak out against repression.

Pope Francis’ agenda during his first African excursion is packed. Central African Republic is engulfed in a brutal civil war, and a refugee camp is on the pope’s itinerary, which will surely be a moving experience to witness. Questions of inter-religious cooperation, regional security, and human development will be at the forefront of discussion since they strongly affect a continent where Christianity is growing rapidly.

That said, for a pope exhorting the church to go to the margins, LGBT lives should not be negligible. Even a brief remark during his several planned speeches would go a long way to doing some good. Even better would be a call for sexual and gender human rights during a homily at Mass. Most importantly, he needs to educate the bishops in these countries that it is their obligation as pastors and leaders to protect the rights and lives of LGBT people. Anything the pope says positively would reverberate around the globe. Francis has been too silent on this issues. It is time for the pope to speak out!

[We ask] you, other Catholics, and others concerned with LGBT human rights to appeal to Pope Francis for a message of solidarity – and more than that, an appeal to save LGBT lives. To take action with #PopeSpeakOut and add your voice, click here. 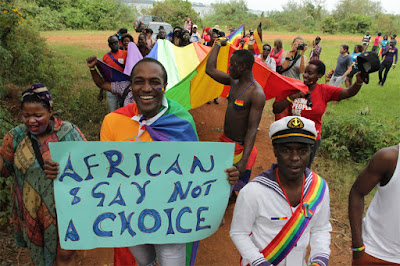 Above: A photo from Rachel Adams' exhibition "Uganda Pride," which was part of the Homotopia Festival of 2012. Uganda's first Pride event was held that year in Entebbe, on the shores of Lake Victoria, despite the fact that homosexuality is a punishable offence. Adams' exhibition documents this groundbreaking event.

See also the previous Wild Reed posts:
• Kittredge Cherry on the "Tough Questions" Raised by the Uganda Martyrs
• Coming Out in Africa and the Middle East
• Sanctuary for Gay Syrians Danny and Aamer
• The Scourge of Homophobia in Economically Impoverished Countries
• Quote of the Day – March 10, 2014
• In Uganda, a “Fearless Voice” for Gay Rights is Brutally Silenced
• The Blood-Soaked Thread
• A Prayer for International Day Against Homophobia
• A Christmas Message of Hope from Uganda
• Why I Take Hope in Pope Francis' Statement on Gay Priests