"We Are All One" – #Justice4Jamar and the 4th Precinct Occupation 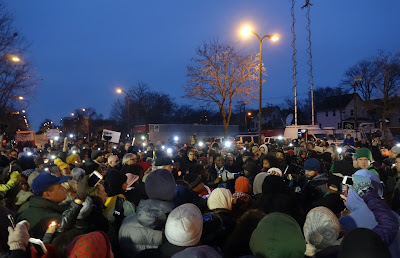 Yesterday evening my friends Kathleen and Tim (left) and I attended the "Justice for Jamar" candlelight vigil outside the 4th precinct police station in north Minneapolis. The event, which drew around 1000 people (above) was a powerful embodiment of community and solidarity.

During the vigil a number of inspiring speeches were delivered by local and national civil rights leaders, including Cornell Brooks, head of the National Association for the Advancement of Colored People (NAACP), Nekima Levy-Pounds, the Minneapolis NAACP chapter president, and Mahmoud El-Kati, a former Macalester College professor and an African-American historian. The vigil also involved singing, chanting, and a march to the site a few blocks away where Jamar Clark, a 24-year-old black man, was fatally shot by police while in custody on November 15. A number of witnesses say Clark was laying on the ground and handcuffed at the moment he was shot by a police officer.

"We understand that all lives matter," Brooks told the crowd at one point, "[but] unless black lives matter, all lives can’t matter . . . We are in it for the long haul." 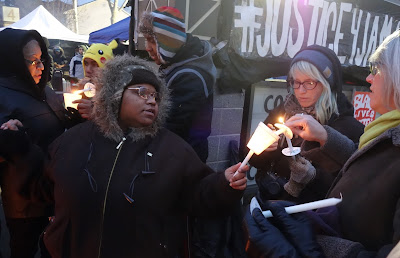 Following, with added images and links, is an excerpt from David Chanen's Star Tribune article on last night's vigil. 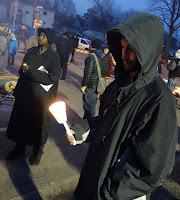 Hundreds of people of all races and backgrounds congregated Friday evening near police headquarters in north Minneapolis for an emotional rally and candlelight vigil that culminated a week of protests over officers’ fatal shooting of an unarmed black man.

The president of the national NAACP, who met with state and city leaders earlier in the day at Gov. Mark Dayton’s residence in St. Paul, was among those speaking at the peaceful rally, which many participants called the most significant and inspiring local civil rights gathering in years.

“We are not here to tell you what to do,” Cornell Brooks, head of the national NAACP, told the emotional crowd. “I believe in what’s happening in Minneapolis.”

The death of Jamar Clark, 24, shot in the head during a scuffle Sunday on the city’s North Side, has galvanized Minnesota activists — from North Side residents to Black Lives Matter activists to the NAACP — and garnered national attention. As protesters have camped outside Fourth Precinct headquarters on Plymouth Avenue N. and engaged in sometimes tense confrontations with officers, police and civic leaders have pleaded for time to thoroughly investigate the shooting, which is also being examined by federal officials and the state Bureau of Criminal Apprehension (BCA).

Police have said that Clark lunged for an officer’s gun and interfered with officers and paramedics responding to a domestic dispute in which a woman had been injured. The officers involved in Clark’s death, Mark Ringgenberg, 30, and Dustin Schwarze, 28, are on paid leave. 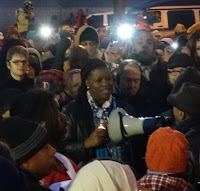 After the rally, the group marched to the spot a few blocks away where Clark was shot. There, Nekima Levy-Pounds, the Minneapolis NAACP chapter president, said “it could have been any one of us who died.”

“This isn’t about demonizing the Police Department,” she said. “But we are going to get the truth one way or another.” 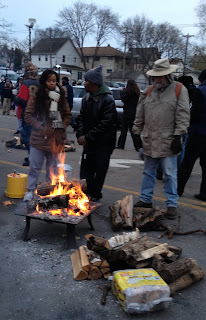 . . . Throughout Friday, the scene at precinct headquarters was peaceful, with some protesters warming themselves at campfires and donning donated hats and mittens. Among those dropping by to express support were clergy members and students from nearby Anwatin Middle School. Some protesters worked to clear the streets of debris, while others directed traffic.

Helen Williams, who has lived in north Minneapolis for more than 40 years, came to sweep the street and show her support for protesters.

Williams, who has long helped families bury their dead when they cannot afford it, said she is helping the Clark family plan for their son’s funeral. “I’m here to do my part to offer crowd control and hugs,” she said.

Several Minnesota progressive and labor groups issued statements urging a thorough and transparent investigation. State DFL Chair Ken Martin said, “It is hard to have hope for the future when it seems that our community has turned an indifferent eye to the very real and persistent issues facing communities of color in Minnesota. The DFL stands by everyone working peacefully for a transparent investigation and to bring the conversation of fairness and justice to the forefront.”

A coalition of leaders from African immigrant communities said at a news conference in Brooklyn Park that immigrant groups support protesters’ call for clarity and justice in the Clark case.

“The African community is united with our African-American brothers and sisters,” said Abdullah Kiatamba, executive director of the group African Immigrant Services. “We are all one. A harm to one is a harm to all of us.”

. . . As Friday night drew to a close, protesters remained at the site, chanting and singing peacefully. Although it appeared that the rally had helped ease tensions, questions about Clark’s death were no closer to being answered.

To read David Chanen's article in its entirety, click here.

Following are more photographs that I took at last night's "Justice for Jamar"candlelight vigil. 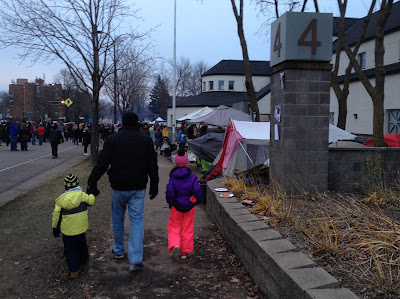 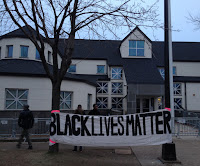 Above: This image shows how protesters have "occupied" the space outside the police precinct. Along with sleeping tents, activists have set up a soup kitchen, a clothing stand, several banners, and a number of campfires on the sidewalk and in the street in front of the police station.

Following is how one young person from the Northside recently described on Facebook her experience of the ‎4th precinct occupation community. 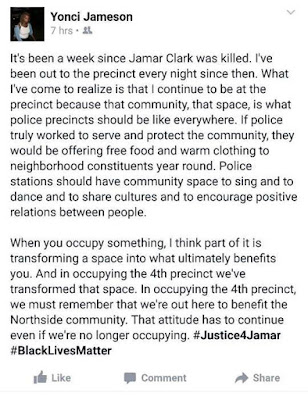 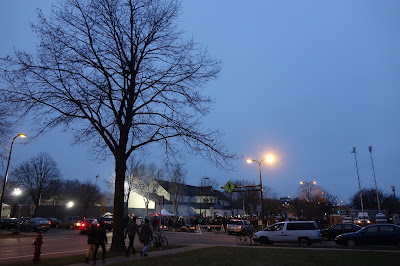 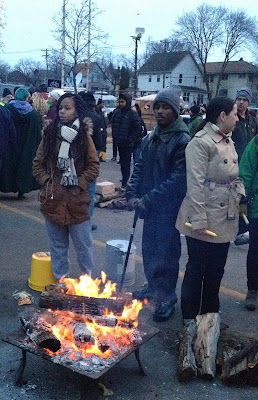 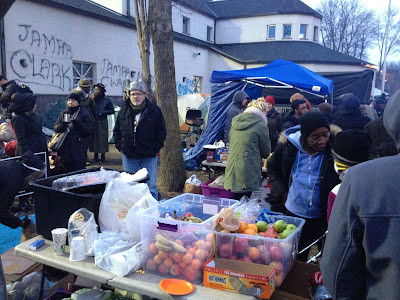 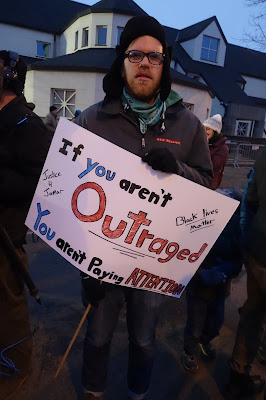 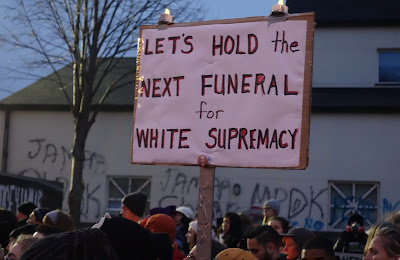 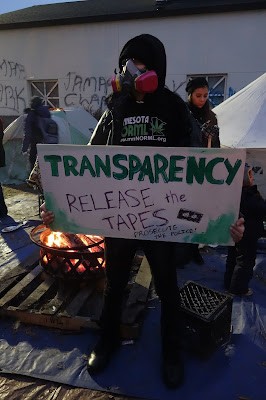 Above and below: Many people are demanding the release of police and surveillance videos of the shooting of Jamar Clark. Nekima Levy-Pounds, president of the Minneapolis NAACP says that there have been "so many false narratives spun by the Minneapolis Police Department as to what has happened. . . . Enough is enough." 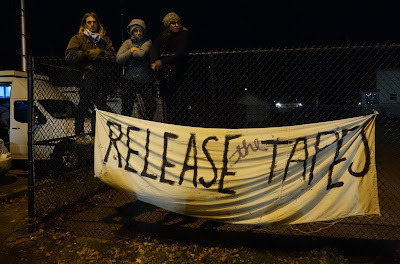 Authorities, however, have said that there was no video of the shooting from police dashboard or body cameras. Investigators are nevertheless reviewing video from business and security cameras in the area. They also are checking witnesses' cellphones but none of those videos captured the entire incident.

Levy-Pounds is also calling for grief counselors for those who witnessed the shooting, saying that Clark's case was "just the tip of the iceberg in terms of the abuse and harassment." 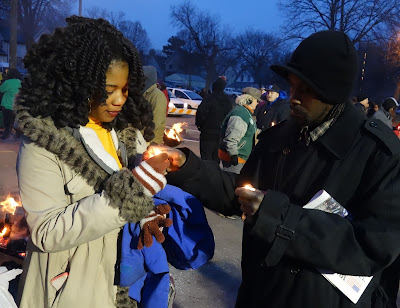 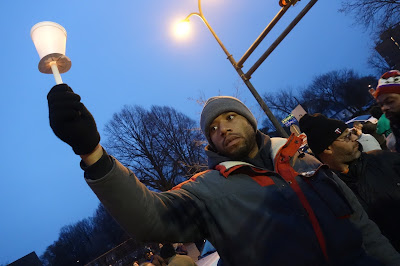 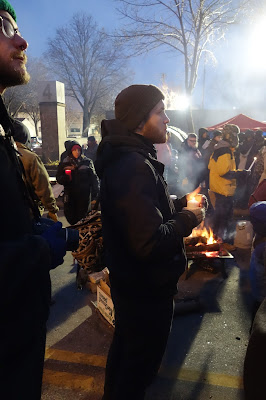 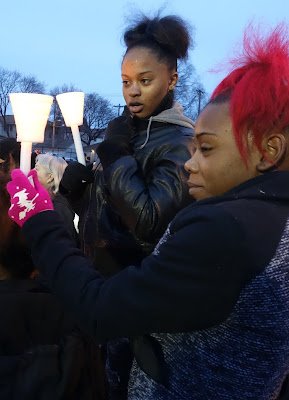 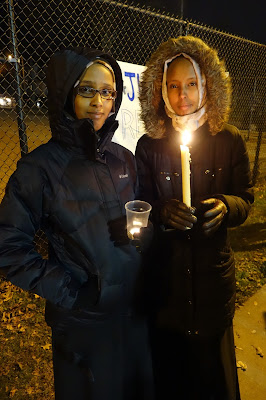 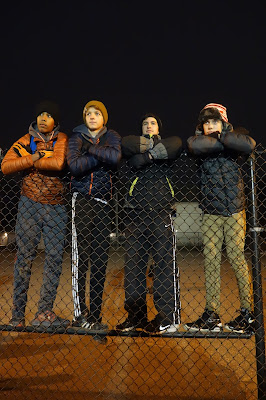 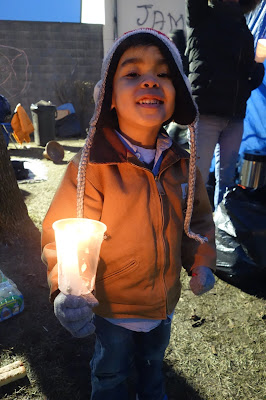 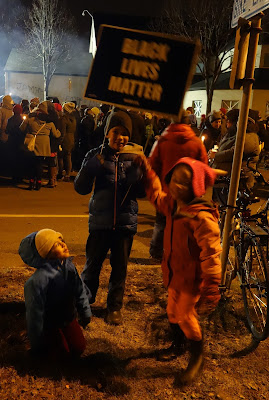 NEXT: An Update on #Justice4Jamar
and the 4th Precinct Occupation 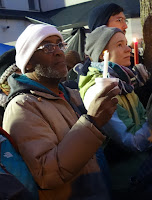 Labels: Black Lives Matter, Out and About - 2015, Social Justice