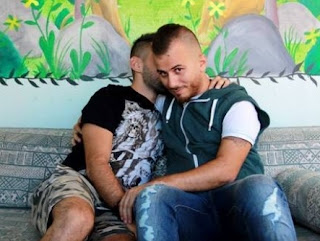 Above: Ahmed Danny Ramadan (right) and his partner Aamer – September 2014. Aamer's face is obscured because he is not out to his family in Syria.

This adventure has left me reeling;
There's no expression for what I'm feeling.
I see a lantern in the distance,
Lights the pathway of least resistance.
In you I have faith,
We'll make our escape.

Okay, this isn't exactly recent news, but it's an important story and one about which I don't think many people have heard. On one level, it's the story of two gay Syrians, Danny and Aamer, and their finding of sanctuary last year in Canada from the homophobic and potentially deadly atmosphere of their homeland. On another level, Danny and Aamer's journey is a reminder of both the horrendous situation being faced by Syrian refugees and the plight of lesbian, gay, bisexual, transgender, queer and intersex (LGBTQI) people in many parts of the world where simply being yourself remains an extremely difficult and dangerous undertaking. For instance, just this past September ISIS executed nine men and a boy accused of being gay in Syria and have claimed responsibility for the killings of at least 30 other gay men. In many cases, those accused of being gay are thrown to their death from rooftops. It's sobering to think that such a terrible fate may well have been Danny and Aamer's, if not for their escape from Syria. 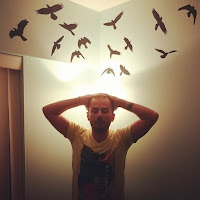 In researching Danny and Aamer's story I discovered that Danny Ramadan (left), who also goes by Ahmed Danny Ramadan, is quite an inspiring figure. Currently the volunteer coordinator for Qmunity, a queer resource center in British Columbia, Danny also serves as DailyXtra's "Arab world correspondent." In this position he has written a number of insightful and moving pieces about his life in Syria as a gay man. (Some of these articles are listed at the end of this post, while Ramadan's complete DailyXtra archive can be accessed here.) He's also written for The Washington Post, Foreign Policy, and Egypt Independent, and has translated into English 1000 Lashes by imprisoned Saudi blogger Raif Badawi. Also, since finding sanctuary with his partner in Canada, Danny has said that it's "time to pay it forward." He and his partner are doing just that by sponsoring their lesbian friend Rory to come to Canada. "I cannot think of a person who is more suitable for this sponsorship," says Danny. "She is an educated, well-deserving woman facing the harsh life of being a Syrian lesbian refugee stuck in Turkey." Like I said, Danny's quite the inspiring fellow. 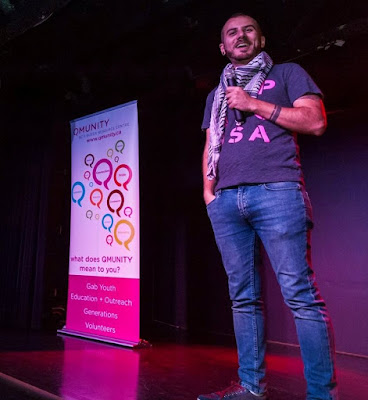 Following is the full text of Danny and Aamer's story as published by the Canadian Broadcasting Corporation (cbc.ca) last September.

“I want to ride a roller coaster for the first time,” Danny Ramadan told cbc.ca. “I would also like to give back to the community that brought me here. It’s just beyond (my dreams).”

Ramadan and his partner, who has requested anonymity because he’s not out to his family, are are among the first refugees from the war in Syria to arrive in Vancouver, according to cbc.ca.

The ongoing Syrian war has created over 3 million refugees with more than 100,000 Syrians having lost their lives in the escalating conflict between forces loyal to President Bashar al-Assad and those opposed to his rule. In the past year, Canada pledged to take in 1,300 before the end of 2014.

However, many gay men in Syria are threatened not only by the Syrian Army and Islamist organizations and rebels but also from family members, says Human Rights Watch.

Gay people even before the war have been the target of “honor killings” with family members viewing same-sex relations as a disgrace and the persecution is their bid to overcome that public disgrace. 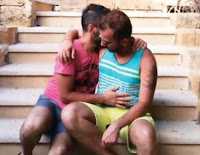 Before coming to Canada last week, the couple had been living in Beirut, Lebanon. They are eager to start a new life in Vancouver with their rescue dog, Phoebe.

By coming to Canada, the couple hopes to escape the homophobia they faced in Syria and Lebanon.

“Here, I have the ability to be myself finally,” says Ramadan. “I have been gay-bashed in the Arab world. My family disowned me at times. But here, I feel like I have a family somehow,” he told cbc.ca

Their coming to Canada was made possible by a group from Vancouver who helped in bringing the couple by raising funds, working through the application process and lobbying MPs and MLAs.

Rainbow Refugee, an organization that advocates for refugees fleeing persecution because of sexual orientation, was also instrumental in bringing the couple to Canada.

For CBC News' September 2015 follow-up to this story, click here 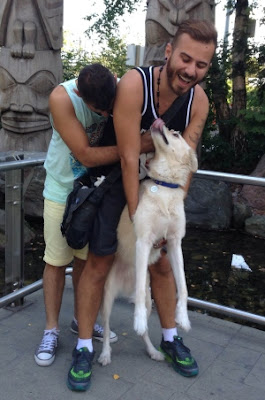 See also the previous Wild Reed posts:
• Rallying in Solidarity with the Refugees of Syria and the World
• Something to Think About – November 18, 2015
• To Be Gay in Iraq is to Be a “Defenseless Target”
• The Scourge of Homophobia in Economically Impoverished Countries
• Quote of the Day – March 10, 2014
• In Uganda, a “Fearless Voice” for Gay Rights is Brutally Silenced
• The Vatican’s Actions at the UN: “Sickening, Depraved and Shameless”
• The Blood-Soaked Thread
• A Prayer for International Day Against Homophobia
• A Christmas Message of Hope from Uganda
• Omar Akersim: Muslim and Gay
• Parvez Sharma on Islam and Homosexuality
• Coming Out in Africa and the Middle East
• Liberated to Be Together